A TALE OF SCALES, AND SOME BOTANICAL SERPENTS 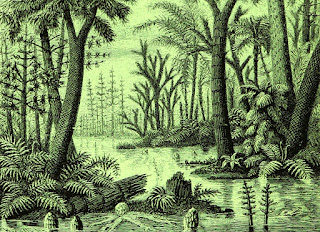 I've always been fascinated by zoological misidentifications, whether accidental or deliberate. So here is a truly outrageous example of the latter variety that I recently investigated.

During early 1851, publicity broadsides were being posted on walls around the Welsh town of Neath to draw public attention (and attendance) to an eyecatching object currently being exhibited in the town hall during three consecutive days (30 and 31 January and 1 February). For according to the broadside, the object was none other than a very sizeable fossil serpent, 8 ft 3 in long and 7 in across. 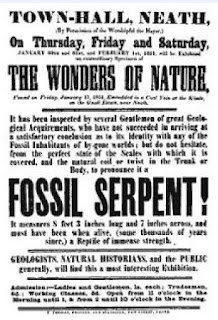 As revealed by F.J. North in the second edition of his book Coal, and the Coalfields in Wales (1931), however, it was actually the trunk of an enormous, superficially tree-like, but long-extinct lycophyte plant related to club mosses and (especially) quillworts.

Known as Lepidodendron, it thrived during the Carboniferous Period around 360 million years ago, and attained a colossal height of up to 180 ft. Its fossils are found preserved in coal deposits, and it is characterised by its trunk's noticeably scaly outer surface (Lepidodendron actually translates as 'scale tree'), although its 'scales' are actually leaf scars, created when its leaves fell off. 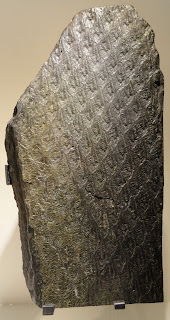 Moreover, the true botanical identity of Lepidodendron fossils had been known to scientists for several years before this exhibition. So one can only assume that the latter's organiser did not intend to let a mere technicality like the truth stand in the way of making some easy money from scientifically-naive visitors anxious to see the mortal remains of an alleged prehistoric serpent!

Indeed, amateur exhibitions at sideshows and fairs of similar Lepidodendron specimens masquerading in best Barnumesque fashion as giant fossil snakes or even lizards were by no means uncommon back then. And for another monstrous misidentification featuring a supposed fossil snake, be sure to click here to read all about the bothersome Bothrodon. 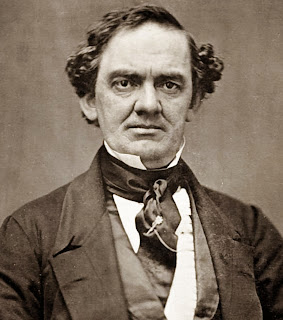 Pictured here in 1851, the very same year as the Neath exhibition, the great(est) showman Phineas T. Barnum - he of the fake Feejee mermaids and other zoological frauds displayed by him during the 1800s - would no doubt have approved! (public domain)
Posted by Dr Karl Shuker at 02:08