BETWEEN A ROC AND A HARD PLACE 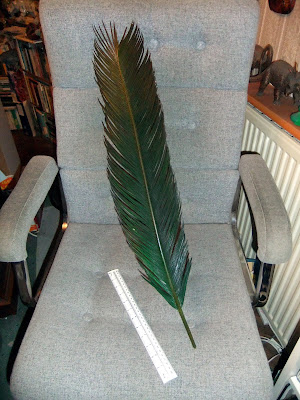 One of my roc feathers (Dr Karl Shuker)

The main shopping centre of Birmingham, the United Kingdom’s second largest city, is replete with unique shops and market stalls selling all manner of interesting and often quite esoteric items. Even so, the last thing that I expected to find there when casually browsing in a certain large fancy goods shop a couple of years ago was a sheaf of roc feathers! But that is precisely what I did find, much to my astonishment and delight. Allow me to explain. 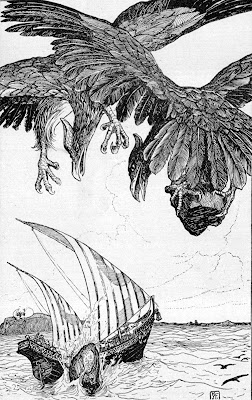 According to Eastern legend and lore, the mighty roc or rukh - featuring as one of Sinbad the Sailor’s most formidable protagonists in the ‘Arabian Nights’ - was said to be a monstrous bird of such prodigious size and strength that it could haul elephants aloft, and carry them away to its gargantuan nest where its brood of hungry super-sized offspring would feed upon these hapless pachyderms. For decades, zoologists and cryptozoologists alike attempted to explain the mythical roc as having been based upon sightings of a gigantic ostrich-like ratite known scientifically as Aepyornis maximus, the great elephant bird, standing 10 ft tall and weighing up to half a ton. 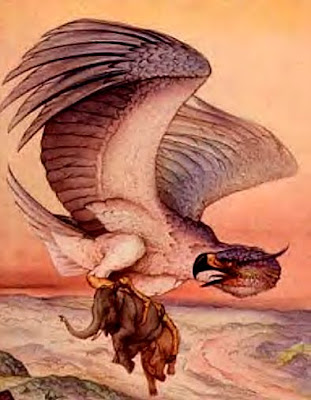 The roc carrying off an elephant

Formerly native to Madagascar, this avian goliath inhabited the extensive marshes and swamps once present on this large island mini-continent, and was known locally as the vouronpatra or vorompatra. It is believed to have survived until at least as recently as the late 1700s, before a lethal combination of over-hunting, introduced avian diseases, and deforestation leading to the drying out of its swampland habitat brought about its demise, but fragments from its enormous eggs can still be commonly found on beaches here. 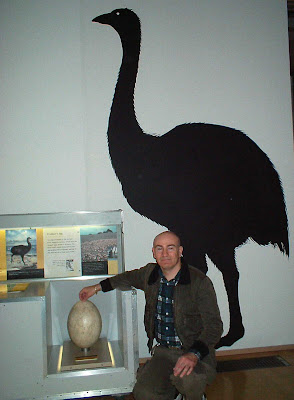 Unfortunately, reconciling the roc with the great elephant bird faced one major problem. Aepyornis was flightless, and therefore wholly incapable of abducting unwary elephants and swooping off into the air with them, gripped tightly in merciless talons of steel as those dusty Arabian legends would have us believe. Nevertheless, on account of its huge size, the great elephant bird remained the closest match – indeed, the only remotely plausible match – for the fabled roc...until 1994, that is.

This was when palaeontologist Dr Stephen M. Goodman published a paper documenting the subfossil remains of a hitherto-unknown species of huge eagle, which he formally christened Stephanoaetus mahery, the Madagascan crowned eagle, and which is believed to have survived on the island until around 1500 AD (both it and its prey were probably hunted into extinction by humans). This spectacular raptor is thought to have preyed not only upon various now-extinct species of giant lemur (subfossil remains show that some weighed up to 26.5 lb) but also quite possibly upon the great elephant bird itself. Clearly, sightings of this mega-eagle made by early European explorers visiting Madagascar and subsequent exaggeration of these sightings during retellings when back home provide a much more likely explanation for the origin of the roc legends than does the flightless elephant bird.

Yet not even Madagascar’s colossal crowned eagle can explain the truly immense plumes that crusaders sometimes purchased in the Middle East to delight and bewilder their families and friends back home in Europe. Claimed by their Arabian vendors to be genuine roc feathers, they sometimes measured 3 ft or more in length, and their vanes’ blades were razor-sharp to the touch.

In reality, of course, these spectacular objects were not feathers at all. They were actually the extremely long leaves of the raffia palm tree Raphia regalis (and related species), but they were certainly convincing enough in their superficial resemblance to gigantic feather to fool the unsuspecting crusaders into spending their hard-earned money on them as exotic souvenirs.

Moreover, when I first came upon the tall vase containing sheafs of these wonderful objects in that Birmingham shop, for just a few moments I too shared the shock and wonder that those crusaders must have experienced when first they saw them. A few of these pseudo-plumes stood nearly half as tall as I am (5’10”), and whereas some were brown, others were an exotic jungle green. Once I’d recovered from my shock, I knew at once what they were, but I still marvelled at finding such cryptozoological curios in such a relatively mundane locality as a high street shop in Birmingham, rather than some mysterious, shadowy souk in the depths of an Arabian kasbah.

Picking a few up – and soon discovering how painful it was when their sharp vanes stabbed into my hands! – I could definitely understand how their wily vendors in those far-distant Middle Eastern lands and times had talked the naïve crusaders into believing that these fantastic objects were roc feathers. Indeed, part of me even wanted to believe it myself!

Instead, however, I satisfied myself with the knowledge that here were some wonderful additions to my collection of zoological esoterica, but I received a final shock when I took half a dozen of the green versions (which looked much more feather-like than the plainer brown ones) to the till to pay for them. Incredibly, all six together totalled less than £2, making them without a doubt the best cryptozoological bargains that I had ever purchased!

A month or so ago, I found myself back inside that very same Birmingham shop, but its remaining roc feathers were long gone - which, I suppose, is no more than one should ever expect when dealing with imaginary monsters!