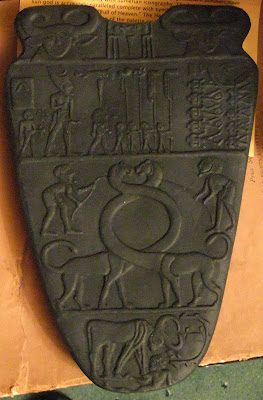 Exact replica of the Narmer Palette (Dr Karl Shuker)
Surrounded by spectacular sarcophagi, mummies, and other necrological relics of every conceivable size, age, and nature, the last thing that I expected to encounter during my January 2006 visit to the Egyptian Museum in Cairo was an artefact of cryptozoological controversy. However, while walking around Gallery 43 on the museum's ground floor, this is precisely what happened. Suddenly, I found myself in front of a large glass case containing a greyish-green, shield-shaped exhibit, and as I looked in surprise at the pair of bizarre beasts carved upon one side of it I realised that I was looking at the extraordinary Narmer Palette - one of Egypt's oldest, and most enigmatic, historical objects. (Sadly, visitors were not permitted to photograph the palette, but I was subsequently able to purchase an exact replica model of it, a photo of which is included at the beginning of this blog.)

Composed of dark schist, measuring 25 in high and 16.5 in wide, and richly adorned on both sides with elaborate, finely-wrought carvings, this remarkable artefact was discovered during 1898 by archaeologist James E. Quibell in the Upper Egyptian city of Nekhen (nowadays Hierakonpolis) while excavating the royal residences of various ancient Egyptian rulers. Despite dating back to c.3200 BC (the Old Kingdom), the palette has survived intact, and was a votive (gift) offered up by King Narmer to the sun god Amun-Ra. What makes this artefact so significant historically is that it not only bears some of the earliest-known examples of Egyptian hieroglyphics but also commemorates a major event in ancient Egyptian history - the unification of Lower Egypt and Upper Egypt into a single land, with King Narmer as the first ruler of both lands.

On one side of the palette, King Narmer is vividly portrayed as ruler of Upper Egypt smiting his Lower Egypt enemy, and facing his own incarnation as the falcon deity Horus, god of the sky. On the other side, there are various depictions celebrating Narmer's triumph after capturing the crown of Lower Egypt, thereby unifying Upper and Lower Egypt. The largest, most striking image on this side, however, does not feature Narmer at all. Instead, it portrays a pair of inordinately long-necked creatures whose flexible necks entwine around one another, forming a border round a central circular reservoir that some researchers believe may have been used to hold perfume, or to serve as a receptacle within which such cosmetics were manufactured in situ.

These extraordinary beasts are generally referred to as serpopards (though in at least one reference source they are termed mafedets), for good reason. For whereas their necks are decidedly serpentine in appearance, their heads are very leopard-like. As for their bodies: I have seen them likened variously to panthers, lions, and even baboons. After having finally witnessed the palette at first-hand (prior to then, I knew of its images only from various internet pictures of varying quality), I agree that their bodies, long limbs, and lengthy tails certainly possess a degree of simian similarity, more than I had previously realised when simply viewing pictures of them. But what were these serpopards meant to be - wholly symbolic, a purely legendary beast, perhaps a very distorted portrayal of some known animal, or something more than any of these options?

The reason why I was already familiar with the Narmer Palette is that in the past it has attracted a degree of cryptozoological speculation that the serpopards may conceivably represent a stylised or alternatively a distorted depiction of some mokele-mbembe-type species of surviving long-necked dinosaur that was alive at least at the time of King Narmer. Of course, this would not be the first time that ancient Middle Eastern records have inspired theories of historical dinosaur survival - the mushush or sirrush carved on King Nebuchadnezzar II’s resplendent Ishtar Gate of Babylon (which I was privileged to view at firsthand when visiting the Vorderasiatisches Museum in 1983 in what was then East Berlin), the huge monster Behemoth referred to in the Holy Bible, and a reptilian mystery beast in a short book of the Apocrypha entitled 'Bel and the Dragon' all readily come to mind. Could the serpopard be another putative neo-dinosaur?

Much as I would like to admit it to this select crypto-company, after viewing the palette's serpopards up close and personal I was left in no doubt whatsoever that these necking entities were unquestionably mammalian, not even remotely reptilian. The serpopard head, complete with ears, is indeed leopard-like, not leonine as some have suggested, but the toes of the feet, posture of the body and limbs, as well as the limbs' relative lengths, and the shape and carriage of the tail all struck me as rather more monkey-like than feline. As for the palette pair's disproportionately long, impossibly flexible necks, it seems likely that they were intertwined not only to symbolise the union of Upper and Lower Egypt (as well as the eastern and western heavens?), but also for practical purposes - to fit neatly around the palette's central reservoir. Interestingly, each of the two depicted serpopards is held on a leash by a handler, who may be a slave, or a tribute, indicating perhaps that the serpopards were a gift to King Narmer, or possibly even domesticated?

Significantly, depicted serpopards are not restricted to the Narmer Palette. Another early Hierakonpolis palette, known as the Oxford or Two Dogs Palette and retained at Oxford University's Ashmolean Museum, also bears a pair of these striking creatures on one side, plus a single one on the other side. The paired serpopards on this artefact have even longer necks than those on the Narmer Palette, but this time they are not entwined - instead, they are held in a painful-looking zig-zag pose above their bodies, one on each side of a central reservoir. On the Two Dogs Palette (named, incidentally, after the two superficially canine - but quite possibly hyaenid - beasts comprising the upper section and outer sides of the palette, though the head of one is missing), the necks of the serpopards are striped, and there are stripes on their foreparts too.

Another serpopard-depicting palette is the Four Dogs Palette held at the Louvre, Paris, and there is also a preserved cylinder seal from Susiana, the high country of the ancient Persian civilisation of Elam, that depicts a series of very long-tailed neck-entwined serpopards. Clearly, therefore, the serpopards of the Narmer Palette were clearly not just an invention of its sculptor, devised merely as a decorative motif for bordering and highlighting the palette's central reservoir and/or as a symbol of King Narmer's unified Egypt.

A more conservative identity than a mokele-mbembe but no less intriguing is that perhaps the serpopards were poor representations of a giraffe (a species that once existed in Egypt), possibly based upon indirect descriptions of what this exceptional creature looked like rather than personal observations. If this were so, however, surely the giraffe's long legs would have been mentioned and described to the sculptor, not just its long neck. Yet although the serpopards' legs are fairly long, they are far shorter than one would expect for a giraffe, whereas their necks are much too long. In any case, it just so happens that there is absolute iconographical proof readily to hand to confirm that the serpopard and giraffe are totally discrete animals.

On the reverse side of the Two Dogs Palette, a wide range of creatures is depicted, including readily-identifiable lions, antelopes, goats, a hartebeest- or gnu-like ungulate - and not only a serpopard but also a clearly-recognisable giraffe, the latter beast complete with long inflexible erect neck, small horns as well as ears on its head, long giraffe-like legs, hoofed feet, and downward-pointing tail. Just above it, offering a perfect opportunity for direct comparison, is a flexible-necked, hornless, leopard-headed, shorter-legged, toe-footed, upward-tailed serpopard - indisputably a wholly different animal.

Equally worthy of note is that alongside portrayals of real animals on the Two Dogs Palette is not just a serpopard but a winged griffin too, depicted in traditional composite form with leonine body, eagle's head, and feathered wings. This provides immediate proof that ancient Egyptian sculptors carved real and fabled animals together, so the presence elsewhere of serpopards depicted alongside people and real animals cannot be taken as firm evidence that the serpopards themselves must also be real.

Accordingly, the most reasonable solution to the mystery of its identity is that the serpopard is nothing more than another composite (albeit exotic-looking) mythical beast, just like the griffin, as well as certain other Egyptian monsters such as the hippo-bodied crocodile-headed ammut, and the venomous winged snakes that reputedly swarmed across ancient Egypt each year like locusts (indeed, perhaps they were directly inspired by actual locust swarms). After all, not all beasts of legend are creatures of cryptozoology in disguise - from centaurs and minotaurs to cactus cats and gooseberry wives, the inventive human imagination is more than sufficiently capable of summoning forth from its uncharted depths a veritable menagerie of wholly original monsters surpassing even the wildest excesses of Mother Nature.
Posted by Dr Karl Shuker at 17:03