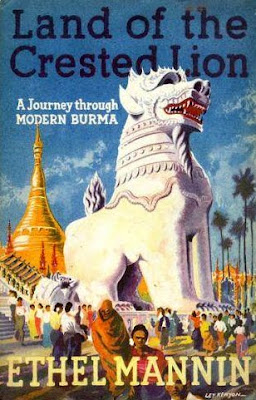 Despite having used the internet on a daily basis for many years in relation to my writings and researches, I still forget just how effective it can be in uncovering information on obscure subjects that have long perplexed me.

The crested lion is a case in point. Roughly 15-20 years ago, while browsing at a book fair, I came upon a travelogue book from the 1950s whose title intrigued me, because it referred to a legendary far-eastern creature that I hadn’t previously heard of, but when I looked through the book I found only the briefest of mentions to it. Feeling somewhat cheated, I decided against buying the book, and put it back on the shelf.

Unfortunately, however, by the time that I arrived back home I’d forgotten the book’s title, and had not even noticed the name of the author, so there seemed little hope of tracking down any information on the mythical creature. All that I could recall was that it was some form of lion, with a horn, or a crest, or a tuft, or some such accoutrement that distinguished it from the real world’s more prosaic maned variety.

Many years passed by, during which time the faint memory of this creature and the book whose title referred to it periodically rose to the surface and sent a few ripples through my conscious mind before sinking back into the depths of obscurity once more. But then, just a few evenings ago, while I was completing a chapter on monstrous and mythological cats for my all-new, second mystery cat book - I Thought I Saw The Strangest Cat... (due to be published later this year) - it entered my consciousness yet again – and this time I took notice.

Accessing Google, I entered the words “horned lion” into its search engine, and although various interesting entries appeared, none was remotely relevant to the elusive book that I had seen. “Tufted lion” was equally unsuccessful. But when I entered “crested lion”, the mystery that had baffled me for so long was a mystery no longer.

There before my eyes appeared a lengthy list of entries all headed by the same book title – Land of the Crested Lion, written by Ethel Mannin, a travelogue first published in 1955 that described the author’s journey across what was then Burma (now Myanmar) in 1954. And there on the cover was the striking image that until now I had only dimly remembered, depicting a huge statue of the crested lion, or chinthé, to give it its correct name. Cheered by my belated success, I penned the following paragraph for inclusion in my new cat book’s chapter on mythical felids:

"In Myanmar (formerly Burma), one of the most popular mythical beasts depicted in statues is the chinthé or crested lion, which is frequently encountered in pairs at the entrances to temples and pagodas. It is featured prominently on this country’s currency, the kyat, too, and appeared on the dustjacket of Ethel Mannin’s famous book, Land of the Crested Lion (1955), which charted her journey across Burma in 1954 as a guest of the Buddha Sasana Council, from the Siamese border in the south to the Chinese border in the north. It also gave its name to the Chindits, the name assumed by the forces commanded by British Brigadier Orde Wingate that were charged with long-range penetration operations behind Japanese lines in Burma during World War II. "
But this was not the end of my good fortune regarding Burma’s crested lion. Looking at online images of it, I made another discovery, and one that was very much closer to home than Burma, little more than a couple of feet away, in fact.

Behind where I was sitting in my lounge is a large glass cabinet containing a number of mythological animal figurines and ornaments that I’ve collected over the years, but one of them was now attracting particular attention from me. It was a small elegantly-carved wooden ornament that I’d purchased from a small antique shop a long while ago, but it had always intrigued me because I’d been unable to identify which creature it represented. Now, looking at it once again, I realised that it bore a very close resemblance to various internet images of the chinthé! In short, it appears that my mysterious little ornament is a crested lion, and therefore presumably originated from Burma. 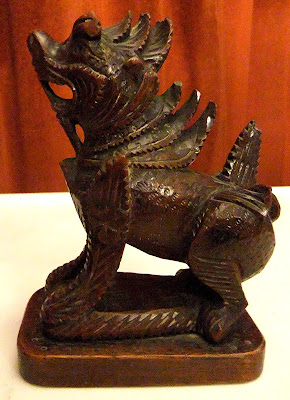 
But even this is not the end of the story. Next to this ornament was a second one that had long perplexed me. Another purchase made during my travels, it is carved from jade and is somewhat leonine in overall form, but bears a single horn on its head. It does not resemble any mythical beast that I’d ever seen depicted or documented either in a book or online (including India’s majestic horned lion or sardula; and the kangla-sha or antlered dragon-lion represented by giant white statues at the sacred site of Kangla in the Indian state of Manipur - of which the kangla-sa is the official emblem) – which, once again, is what originally attracted me to it, and why I duly purchased it.

Interestingly, this enigmatic little figurine came with a small label on which a few details regarding it were written. The creature was apparently called a ‘good luck liou pijo’, which possesses a dragon’s head, a horse’s body, and a unicorn’s feet. Needless to say, after purchasing it I’d soon googled its name, and various spelling variations upon it, but all to no avail. Not even the tiniest snippet of information came to light. So, just as I’d been with the Burmese crested lion, I became resigned never to discover what creature my ornament represented – until now, that is.

Buoyed by my success in tracking down the crested lion book, I suddenly thought of a new approach for uncovering information regarding my ‘good luck liou pijo’. Instead of googling its name, I entered in the search engine’s box the description of it that was written on its accompanying label: “head of dragon body of horse feet of unicorn”. And lo! There it was!

Entry after entry appeared on Google, all of them referring to the same mythical Chinese beast, but one that I had never previously heard of – the pixiu (sometimes spelt 'pi xiu' or 'pi yao'). Yet there could be no doubt that this was the correct creature, because the entries’ illustrations of it corresponded perfectly with my ornament. Why its label referred to the creature as a ‘liou pijo’ remains mystifying, but I think it likely that ‘pijo’ is merely a transliteration of ‘pixiu’. 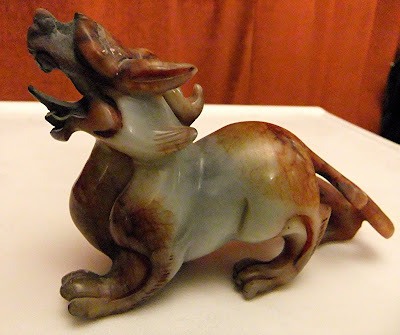 In any event, the riddle of my ornament’s zoomythological identity was now resolved. So, in a very short space of time, I penned another paragraph for inclusion in my book’s mythical cats chapter, this one dealing with the long-sought-after pixiu:

"Although said to combine the head of a dragon with the body of a horse and the feet of a unicorn, the Chinese legendary beast known as the pixiu resembles a single-horned lion in overall appearance (or a single-horned winged lion in those examples that also sport wings). One of the five auspicious animals in ancient Chinese mythology (the other four being the Chinese dragon, Chinese phoenix, Chinese unicorn or ki-lin, and tortoise), the pixiu is believed to attract wealth and good fortune, and, because it has no anus, retain it too, so figurines of this remarkable creature can frequently be found in Chinese homes. "
How strange, and yet how marvellous also, that two totally separate, longstanding mysteries came to be solved within just a few minutes of each other. Then again, perhaps it was only to be expected – after all, one of them did feature the lucky pixiu!
Posted by Dr Karl Shuker at 19:05