RENÉ MAGRITTE AND THE REVERSE MERMAID – A VERY FISHY TALE, IN EVERY SENSE! 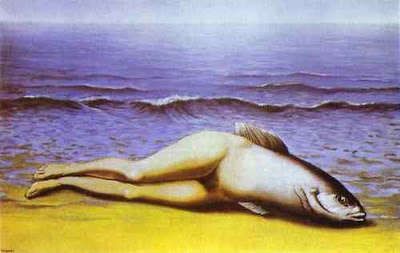 My cryptozoological archives contain many strange reports, but few are stranger – or fishier – than the extraordinary case of René Magritte and the ‘reverse mermaid’ from the Red Sea.

Even as a child, I would always cut out any unusual animal-related reports that I’d spotted in the various newspapers that we had each day, and would then diligently paste or sellotape them into a series of large scrapbooks, which I still have today. Sometimes I would even jot down alongside each report the date on which it had been published, but sadly, my youthful zeal did not always extend to writing down the name of the newspaper in which it had been published.

So it was that on Saturday 7 April 1973, I spotted a brief but truly bizarre article in one of the several London newspapers that we had that day, and promptly cut it out, but without noting down the newspaper in question. Looking back, however, I am certain that it was a tabloid newspaper – most probably either the Daily Mirror or the Sun. After all, I could hardly imagine the Times or Daily Telegraph, for instance, publishing the following report:

“SOME FISHY NEWS FROM CAIROHere’s the dishiest fish you’ve ever seen – a “mermaid” with a fish’s head and the hips and legs of a fully-developed woman. A Cairo newspaper claims it was caught in the Red Sea off Yemen. If one ever gets to Iceland it would hot up the Cod War.” 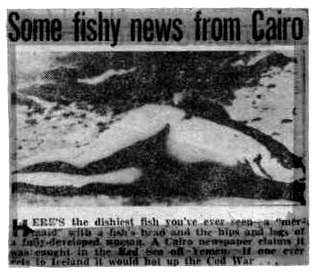 As can be seen from the above image of this report, it was accompanied by an extraordinary photograph of what can indeed be described as a mermaid, but, uniquely, a mermaid in reverse of the usual type, inasmuch as it combined the upper half of a fish with the lower half (legs) of a woman, instead of the other way round.

Needless to say, at the age of 13 I was sufficiently worldly to recognise that this bizarre entity was evidently a fake, but a fascinating one nonetheless, and so this intriguing clipping was dated and sellotaped into one of my scrapbooks. There it remained for a number of years until my interest in cryptozoology had flourished to the point where I had begin amassing files of reports, papers, and other publications as a discrete cryptozoological archive. Accordingly, the tabloid report of Yemen’s reverse mermaid was carefully removed from its scrapbook home and rehoused in a file exclusively devoted to mer-folk reports, where it remains to this day, constituting a truly exceptional account.

During the 1990s, while corresponding with fellow cryptozoological enthusiast Michael Playfair regarding a number of different mystery beasts, I mentioned my reverse mermaid report to him, and as he expressed interest in it I photocopied it and posted the copy to him. Like me, Mike was very intrigued by the weird, reverse nature of the entity’s composite form, promising to investigate the case and let me know if he uncovered anything relevant.

True to his word, a few weeks later Mike posted me a photocopied page from an encyclopedia of science-fiction movies published by Aurum Press that contained a film still depicting a surprisingly similar entity to the version photographed in my newspaper cutting. The still was from an American science-fiction feature film entitled ‘Phase IV’, which had been made in 1974, i.e. just a year after the newspaper report had been published, and it had won the Grand Prix at the 1975 Trieste festival of science-fiction films. 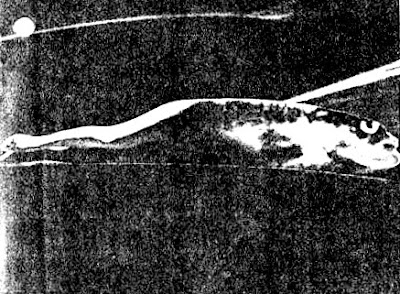 Mike's photocopy of a film still from 'Phase IV'

The only feature film ever made by Saul Bass, a noted designer of film titles, ‘Phase IV’ starred Michael Murphy, Nigel Davenport, and Lynne Frederick, and was shot in England’s Pinewood Studios (even though it was actually set in the United States). It told the story of how, following some undescribed multi-phase cosmic event, a colony of ants in the Arizona desert had undergone a form of accelerated evolution culminating in the development of a collective or ‘hive’ mind, and had become antagonistic towards a scientific team sent out to investigate the extraordinary geometric patterns and towers that the ants had been creating there. Davenport played a typical ‘mad scientist’ character, whose experiments in evolution had created, among other things, the reverse mermaid in the photographic still.

All very interesting, but it did not, unfortunately, provide an explanation of my newspaper report, because that had been published a year before ‘Phase IV’ had even been released. Mike was unable to discover anything further of possible relevance, and for quite some time I was unable to do so either – until one day, that is, when the Belgian surrealist artist René Magritte (1898-1967) came to our rescue.

I had long been captivated by Magritte’s extraordinary art, ever since, in fact, while still a child, I had encountered in a set of encyclopedias his fascinating painting ‘The Voice of the Winds’ - depicting a trio of enormous alienesque spheres floating with somewhat menacing presence above a field. Now, many years later, I had been idly flicking through a book of Magritte’s paintings in a book fair – when, abruptly, I came upon one that I had never seen before and which quite literally took my breath away.

For although I had never before seen the painting (which was entitled ‘Collective Invention’ and had been produced by Magritte in 1935), its image was instantly familiar to me. It was a reverse mermaid, but not just any reverse mermaid. Even though I hadn’t looked at the newspaper report from my scrapbook for a long time, I could see at once that the entity in Magritte’s painting was not just similar – but was identical – to the reverse mermaid in the report.

Purchasing the book, as soon as I was back home I checked the reverse mermaid in ‘Collective Invention’ with that in the report, and confirmed that they were indeed one and the same, differing only in that the shadow effect on the entity in the painting had been enhanced in the report’s version to render it more life-like. The mystery of the reverse mermaid from the Red Sea was no more – it was simply a curious fraud perpetrated by some still-unknown hoaxer(s) and inspired by one of Magritte’s surreal works of art (which may also be the inspiration for the slightly different reverse mermaid featuring in Saul Bass's sci-fi film 'Phase IV').

Interestingly, Magritte returned to the memorable image of the reverse mermaid in 1953, this time featuring a pair of these strange semi-humanoids in his painting 'The Wonders of Nature'. 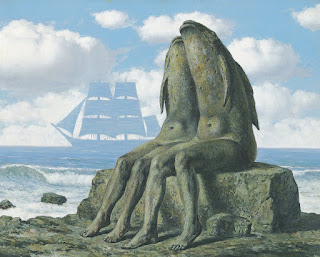 'The Wonders of Nature' - René Magritte

In early March 2011, I posted a photograph of ‘Collective Invention’ on my Facebook wall, and in response FB friend Igor Burtsev provided the following information, which independently collaborated the time period and content of my old newspaper cutting:

"I was in Aden at that time, 1972-73, when local youth had shown this pic as the photo of a real beast. The people there believed in its reality! I couldn't disillude them of that!"

Clearly, therefore, the hoax had indeed originated in or around Yemen during the early 1970s. All in all, a very fishy affair in every sense, but one that, unlike so many others in the cryptozoological world, has finally been at least partly resolved. And who knows? Perhaps one day the still-undisclosed story behind the hoax itself will come to light, and the decidedly odd case of Magritte’s reverse mermaid can then at last be closed.

Also of interest: on 13 February 2012, I received a couple of emails from correspondent Kevin Shelton who had just read this ShukerNature post, and he informed me that Magritte's reverse mermaid also apparently inspired a 1972 episode of the American TV horror series 'Night Gallery' entitled 'Lindemann's Catch'. In it, a fisherman (played by Stuart Whitman) captures a normal mermaid (played by Annabelle Garth), but when he obtains a magical potion that will transform her fishtail into human legs, he little realises that this is only half of the metamorphosis that it will engineer - the other half being the transformation of the mermaid's head and upper body into that of a fish! You can view this tragic-comic climax here.

My sincere thanks to Michael Playfair for his interest and assistance in investigating this case, and for recently suggesting to me that I ought to write a post about it for ShukerNature. Hope you like it, Mike! And also to Kevin Shelton for kindly enlightening me regarding the 'Night Gallery' reverse mermaid. 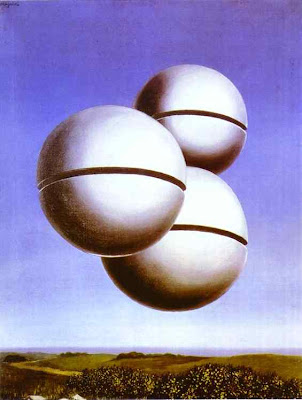 'The Voice of the Winds' - René Magritte