SEEKING THE SANDEWAN - ON THE TRAIL OF A TRAIL...OF BLOOD! 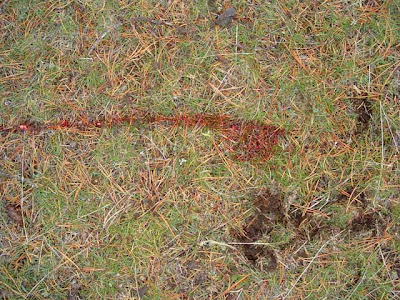 A trail of blood


Cryptozoology - the study of mystery animals - has a seemingly infinite capacity for springing surprises, by unfurling accounts of extraordinary beasts of the most unexpected nature, met with at the most unexpected times. So it was that when English zoologist Carina Norris, arrived in southern Africa during the late 1990s for a well-earned vacation, she little realised that she would soon be pursuing the unique trail of a bizarre creature that apparently had never been documented before in the cryptozoological chronicles (my book Mysteries of Planet Earth, 1999, became the very first to do so). Nevertheless, trail it she did, so here is the strange history of the elusive sandewan.

It was in northern Zimbabwe's Chizarira National Park where their white guide showed Carina and fellow members of her trekking party the sandewan's sinister but diagnostic trail - for whereas other beasts leave behind footprints, the sandewan always yields a trail of blood. Carina's guide claimed that this creature was very much a legend of the local native trackers, and was not spoken of by the country's white inhabitants. Nevertheless, the characteristic sign of the sandewan's recent presence here was undeniably visible for all to see. It occurred on an area of rocky ground, and consisted of a series of large red spots, each an inch or two across, which led towards a cliff face, where they simply petered out.

The guide commented that various 'orthodox' explanations for such enigmatic trails as these had been proposed in the past, such as spots of fruit juice left behind by frugivorous monkeys, or simply bird droppings. However, in Carina's opinion the spots certainly looked like blood, thus indicating that it was the trail left behind by a wounded animal. Moreover, as the trail consisted of discrete spots, it seemed more likely that the animal was running and therefore not badly wounded, rather than being an extensively wounded animal that might be expected to drag itself along the ground, and thus leave a smeared trail instead.

Needless to say, however, nothing in cryptozoology is quite so straightforward as this, and the sandewan is no exception. From the amount of blood present in the trail, it seemed reasonable to assume that the creature in question was fairly large. Yet when Carina and her party followed its sanguineous progression, they discovered that it passed under low branches and through narrow crevices, where only a very small animal could move. And how could it simply vanish when it reached the cliff face - unless, as in all the best lemming legends, it hurled itself over the edge; or simply flew away, on unsuspected wings?

According to local lore, if anyone is fortunate enough to capture a sandewan and presents it to the tribal chief, he will receive great riches. Unfortunately, however, there does not appear to be any record of what a sandewan actually looks like, so unless you are successful in following its bloodied trail and can stealthily pounce upon it, your chances of gaining such wealth are somewhat on par with winning the Lottery jackpot 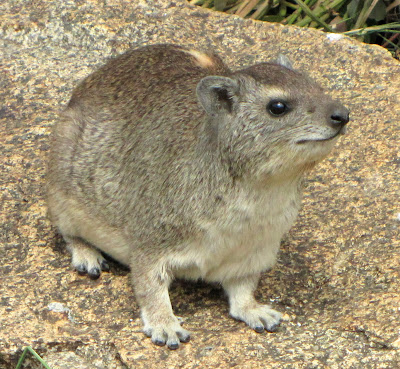 Yellow-spotted rock hyrax (D. Gordon E. Robertson/Wikipedia
It has been suggested, on account of its preference for rocky terrain, that the sandewan may be a hyrax, a very small hoofed mammal superficially resembling a burly guinea-pig yet taxonomically akin to the elephants (I saw rock hyraces Procavia capensis when I visited Table Mountain and the Shamwari Private Game Reserve in South Africa during 2008). However, these mammals are herbivorous, whereas the sandewan's trail of blood (assuming of course that the substance in question is genuinely blood) implies a carnivore.

Although the biochemical nature of the sandewan's trail may be unique in cryptozoology, there are many other cases on record of mysterious tracks left behind by elusive beasts of wholly unknown morphology. One of the most peculiar of these is the amazing pe de garrafa ('bottle foot'), said to inhabit the dense verdant rainforests of Brazil. It is named after its extraordinary trail, which comprises a single line of deep prints resembling the circular holes that would be created by repeatedly pressing the bottom of a bottle into the ground! 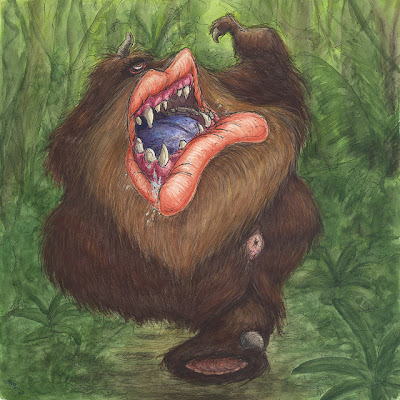 Among the various unsatisfactory identities that have been offered over the years for the mysterious maker of these tracks are an unknown form of bipedal South American ape, or even a deer with a broken leg. To quote the wry words of veteran cryptozoologist Dr Bernard Heuvelmans, however, in On the Track of Unknown Animals (1958):

"...it is hard to see how a limping animal could have left such a regular track, or indeed how anything short of a race of three-legged deer could have accounted for all the tracks of the pe de garrafa seen in the Amazon jungle."

Much closer to home, during the early snowy morning of 9 February 1855 a series of baffling tracks mysteriously appeared over a considerable area encompassing the Devon towns of Topsham, Lympstone, Exmouth, Teignmouth, and Dawlish. According to a detailed account published in The Times on 16 February, the track looked more like a biped's than a quadruped's. Each print was generally placed 8 in ahead of the one before, resembled a donkey's shoe, and measured 1.5-2.5 inches across. Moreover, these prints appeared in the most unexpected locations, running across the tops of houses and narrow walls, through gardens and courtyards enclosed by high walls, and even vanishing in the middle of open fields. 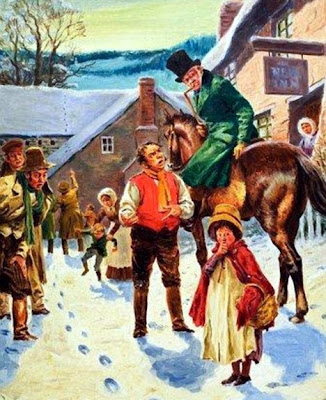 Painting of devil's hoofprints from 1855

Due to their mystifying nature and origin, Devon's eerie tracks became known as the devil's hoofprints. The most popular solution for them is they were made by fieldmice, but just like the sandewan's trail they have never been conclusively explained. A similar incidence of mystery tracks occurred during March 2009 in the Devon village of Woolsery.

As for the sandewan: unless someone can track it successfully to its lair, this bewildering beast's identity will doubtlessly remain unrevealed indefinitely. And as there are few things deemed by native hunters to be more dangerous than a wounded, bleeding animal - particularly one whose identity is not even known - how many hunters are likely to be brave (or foolhardy?) enough to attempt pursuing such a creature anyway?
UPDATE: 24 September 2012
Today, I was delighted to receive from Facebook friend Andrew D. Gable the following newspaper report concerning the sandewan, but this time from South Africa, showing that belief in this mystifying entity is not confined to Zimbabwe. Thanks, Andrew!
Sandewan newspaper report, Middlesboro (Kentucky) Daily News, 5 May 1939