The quaintly-named gooseberry wife is a giant hairy caterpillar said to lurk amid gooseberry bushes on the Isle of Wight (situated off Hampshire, southern England), lying in wait to devour unruly children hoping to steal the berries. Having said that, you will no doubt be relieved to learn that this daunting creature is no more real than any other imaginary bugbear invented by exasperated parents to deter their errant offspring from doing what they shouldn’t.

Nevertheless, I confess to being intrigued as to how such a distinctive bugbear, seemingly confined entirely to the folklore of the Isle of Wight, originated. So if there are any IOW inhabitants who could shed any light on this mystery for me, please let me know – especially as what seems to have been a smaller but real-life version was actually spied elsewhere in southeastern England as recently as the mid-1970s.

In a Fortean Times letter (FT #225, 2007), Neil Powney recalled that his girlfriend Lyn, when aged 7-8 and living in the Corringham area of Essex three decades ago, was once startled to see a huge furry caterpillar crawling up a lavender tree less than 5 ft away from her in her parents’ back garden. She estimates that it was about 1 ft long, as thick as a rolling pin, and covered in 4-in-long hairs, dark brown-green in colour. As she watched, this extraordinary creature made its way up the tree’s trunk, and then across onto a panel of the adjacent fence, which it crawled along until it came to a gap that it squeezed through into the neighbouring garden. When Lyn looked over the fence, she could see the caterpillar making its way across the neighbour’s lawn. Lyn then ran inside her own house and fetched her mother, but when they came outside it had vanished. I wonder whether Lyn, as a child, may have mistaken for a single giant entity a colony of caterpillars moving together in formation, yielding a column or procession (which those of the processionary moths and certain other species do). Yet her view of it was at such close range that this does not seem a very satisfactory explanation. Thoughts, anyone?


No less intriguing, or perplexing, is the following report, which appeared in London's Observer newspaper during January 1852:

"In the Algerian paper we read that a hairy viper was seen a few days ago near Drariah, coiled round a tree. It resembled an enormous caterpillar, and was of a brownish-red colour; its length was about twenty-two inches. The moment it saw that it was observed, it glided into the brushwood, and all attempts to discover it were unavailing. The authorities of the Museum of Natural History of Paris have sent off orders to their agents in Algiers to get a specimen of this viper."


Orders or no orders, their agents clearly failed in their appointed task, because no-one seems to have heard anything more about Algeria's uniquely hirsute vipers. Interestingly, Central Africa is home to an unusual species known as the hairy bush viper Atheris hispida on account of its extremely keeled scales, whose long spiny projections give it a bristly, almost hairy appearance, but no such snake is known from North Africa.

Perhaps, therefore - always assuming that it did truly exist in the first place -  it was actually either an enormous caterpillar or a caterpillar procession, the latter identity clearly being much more likely. After all, if it were indeed a single caterpillar, estimates of its size had obviously been greatly exaggerated.

At least I hope so - because any butterfly or moth metamorphosing from a 22-in-long caterpillar would be a fearsome sight to behold! Something more akin, in fact, to a Wonderland caterpillar of Lewis Carrollian creation than anything expected from Algeria, or even, for that matter, from the Isle of Wight. 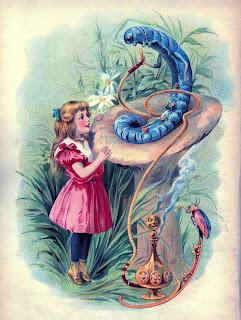