EBONY ENCOUNTERS OF THE SERPENTINE KIND

Whereas some mysteries become less mystifying once investigated, others only become even more so – and the herpetological example under consideration here definitely belongs to the latter category.

As a child, I was bought a wonderful anthology entitled Animal Stories, published in 1967, whose contents had been chosen by Alan C. Jenkins. Within its covers, he had compiled a splendid collection of animal-themed fiction and non-fiction, including chapters extracted from a number of classic books, such as Gerald Durrell's The Bafut Beagles (1954), Jim Corbett's Man-Eaters of Kumaon (1944), Ernest Thompson Seton's Lives of the Hunted (1901), and W.H. Hudson's Far Away and Long Ago (1918).

My favourite story in the entire anthology was a chapter entitled 'A Serpent Mystery', from the above-mentioned book by W.H. Hudson (in which he recalled his early life in the Quilmes, a borough in Argentina's Buenos Aires Province). Reading it, the mystery in question, namely the identity of a very remarkable snake that he had encountered on three separate occasions, seemed to have been solved by him at the end of the chapter. However, after returning to this story recently and investigating his claims concerning the snake, I have realised that the mystery may still be far from solved. 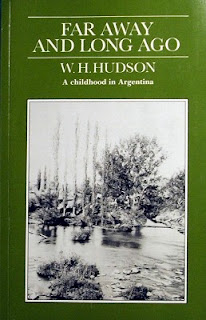 Hudson's 'Serpent Mystery' chapter can be summarised as follows.

Even as a boy, Hudson was familiar with the various ophidian species native to his home region, none of which exceeded 4 ft long, and he spent many hours exploring a weed-infested piece of waste ground at the far end of his family's plantation. One hot December day, while standing amid this wilderness, he heard a soft rustling sound near his feet, and, looking down, was startled to see a very long, slender, coal-black snake moving very slowly past him. He estimated its total length to be at least 6 ft, probably more, and he stared at it intently, remaining motionless until it finally vanished from sight among some long grass. What could it have been? Neither its colour nor its size matched that of any species that he had ever known or heard of existing in this area.

Initially, Hudson vowed never to return to this dangerous site, but his fascination with its unexpected inhabitant ultimately won the day, compelling him to venture back – and after numerous days of failure, he finally caught sight of the mysterious ebony-scaled serpent again, gliding languorously through the weeds in the very same spot as before. This time, however, Hudson was able to spy its destination – a hole in the ground, into which it passed until it was totally hidden from view. On many subsequent visits to the waste ground, he deliberately stood quietly near to this hole in the hope that sooner or later he would once more see its enigmatic owner, but the long black mystery snake never made an appearance.

Then one day, after having stood there yet again, and for some considerable time, but still without success, Hudson became bored, and chose instead to interest himself in observing a bat hanging from a twig just overhead. Concentrating upon the bat, he at first paid no heed to a sensation of pressure upon the instep of his right foot, but when the pressure increased, until it seemed as if a heavy metal bar were resting upon it, he casually glanced down to see what was responsible for this sensation – and was shocked to discover that it was none other than his long-sought-after black mystery snake, which was actually drawing its lengthy inky-black coils leisurely across his foot!

By standing in his present position, Hudson's foot was inadvertently blocking the snake's passage to its hole, and so rather than moving around the offending obstacle it had decided simply to take the shorter course, and pass directly over it! Thrilled, terrified, and tantalised in equal measures, Hudson remained immobile as coil after coil rippled like a sable stream across his foot, until at last their sinuous owner had re-entered its den undisturbed and unalarmed.

Although Hudson returned many times afterwards, he never saw the snake again, and no-one whom he questioned about it had ever seen or heard of anything like it in that area of Argentina either. Subsequent investigations, however, led him to believe that it was a melanistic (all-black) specimen of a species that he referred to as Philodryas scotti. He claimed that this was a not uncommon Argentinian species, though not in his home region, and that it did indeed grow to 6 ft or more.

In addition, Hudson noted that two years before his three meetings with the black snake, a normal-coloured P. scotti specimen – one that he described as "a pale greenish-grey, with numerous dull black mottlings and small spots" - had been encountered by his sister as a small child (and swiftly dispatched by their horrified father), but until now had not been identified.

As noted earlier, one might assume from the above account that Hudson had duly solved the mystery of his black snake – but in fact nothing could be further from the truth.

To begin with: when googling Philodryas scotti, I discovered that only a single publication referred to it – and that publication was none other than Hudson's own book, Far Away and Long Ago. Could it be, therefore, that the name given by Hudson had been incorrect? Pursuing this possibility, I soon discovered that there was indeed an Argentinian species mentioned in numerous sources whose name differed by only a single letter – namely, Philodryas schotti (sometimes given as schottii). A species of venomous, rear-fanged colubrid, its common name is the Patagonian green snake, and nowadays it is referred to by many authorities as Philodryas patagoniensis.

Was this the true identity of Hudson's 'Philodryas scotti'? Certainly, photographs of P. patagoniensis correspond closely with Hudson's description of the snake encountered by his baby sister. Moreover, there are also a number of photographs online of melanistic specimens that readily recall Hudson's black mystery snake. However, P. patagoniensis does not normally exceed 5 ft.

Consequently, if the two snakes reported by Hudson did indeed belong to this species, either they were unusually lengthy or their size had been over-estimated by him. Some mutant gene alleles responsible for melanism are known to increase body size too, so assuming that Hudson had not over-estimated its length, this could explain the black snake's extra-large size, but not the normally-coloured specimen's.

So were these two snakes truly P. patagoniensis, or did they belong to a different species – and, if they did, which one? Perhaps, more than 90 years after the publication of Far Away and Long Ago, the last word has still to be said on the subject of W.H. Hudson's intriguing serpent mystery.