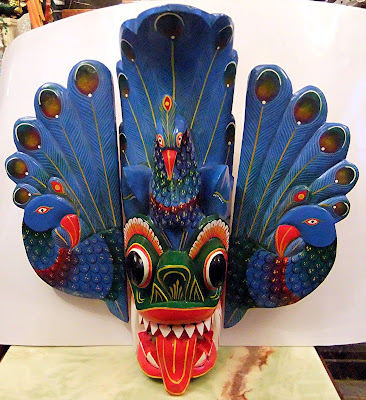 
Those of you who know me personally will be well aware that I am partial to wandering around antique markets and book fairs in search of discoveries pertinent to cryptozoology - but some of my most surprising finds have been unearthed either at the more humble car boot and bric-a-brac sales that are perennially popular throughout the UK or in charity shops, whose contents are wonderfully varied and, by their very nature, wholly unique. (For overseas readers who may not be familiar with the term 'car boot sale', all is revealed here.)

Such items are rarely of great (if, indeed, any!) value in a strictly monetary sense, of course, but in terms of their curio worth, they are, at least in my humble opinion, well worth seeking out and salvaging.

So here, for your delectation and delight, is the first in an occasional series of ShukerNature posts revealing some of the exotica and esoterica that I have uncovered over the years while browsing and bartering at car boot and bric-a-brac sales in search of treasures among the tat.

I saw this beautiful Sri Lankan wood-carved mask at a car boot sale in Birmingham one chilly morning in January 2012, and recognised what it was straight away. Unfortunately, however, it was being perused at the time by a guy in front of me, who couldn't make up his mind whether he wanted it or not, and was haggling with the stall holder concerning its price – while I was standing just behind him silently but very earnestly willing him to put it down and walk off! Happily, he finally did so, telling the stall holder that he'd have a brief walk round to think about it – but the moment he turned away, I grabbed it, paid for it, and walked triumphantly off with it – result!! He who hesitates, etc etc! 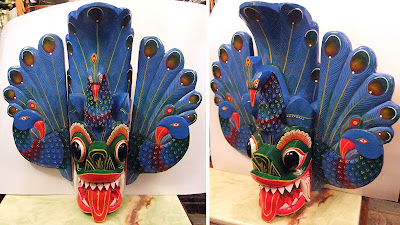 The mask depicts Maura Raksha, Sri Lanka's peacock demon, who brings peace, harmony, and prosperity, and is one of several demons whose masks are used in various types of traditional dance-based rituals (e.g. devil dancing, kolam dancing, sokari dancing). These masks are also widely seen at the main entrance of Sinhalese homes, to ward off evil influences and protect the householders, and they date back to pre-Buddhist times when Sri Lanka was an agricultural society.

Coincidentally, the previous year I came upon a set of much smaller but no less interesting Oriental demon masks at a different car boot sale. Originating from Thailand this time, they were in the form of ornamental bottle-top covers. 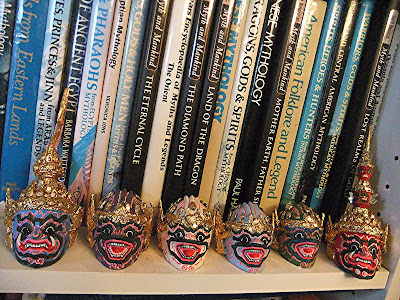 My set of Thai demon mask bottle-top covers – no home should without one! (Dr Karl Shuker)

Earlier this year, I spotted a large-sized fluffy toy in the form of a womble on the stall of a friend, Wayne, at a local bric-a-brac market. Wayne had recently obtained it in a batch of items purchased in a house-clearance sale for reselling purposes, and although it had clearly been a much-loved womble in its time, it had evidently seen better days too, as its fur was somewhat bedraggled now. Consequently, I reluctantly declined the opportunity to add it to the Shuker menagerie. Nevertheless, Wayne kindly agreed to snap a photograph of me holding this womble (I think he's Orinoco), because, after all, in the weirdly wonderful world of cryptozoology, you don't know when such a picture may come in useful...well, you don't! 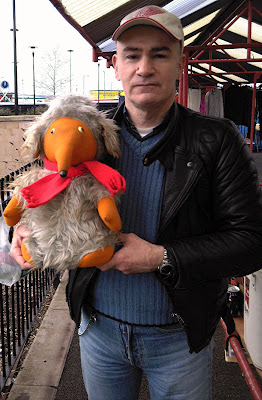 One of my more recent car boot purchases, this small but delightful figurine is of an owl wearing a crown. I have no idea as to its origin or specific significance, though I am aware that owl kings and similar characters feature in various European folktales, so I assume that this is what it represents.

In any event, an owl king purchased for the princely sum of only £5 is certainly a bargain!


And don't forget to check out future ShukerNature posts for more car boot curios! After all, where else are you likely to find a Portuguese egg-bowl in the shape of a dodo?? 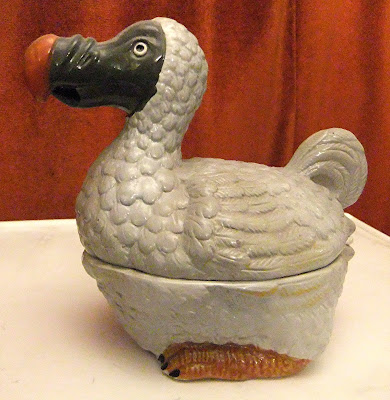 My dodo-shaped Portuguese egg-bowl, purchased at a bric-a-brac market for £2.50 many years ago (Dr Karl Shuker)