THE AFRICAN CRESTED RAT - KICKING UP A STINK OVER SKUNK IMPERSONATION 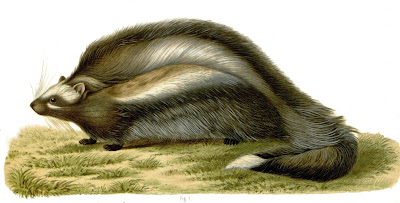 19th-Century colour painting of the type specimen of one of Africa's most amazing rodents - Lophiomys imhausi, the African crested (maned) rat

Everyone thinks that their pet is special, but the following one really was, at least as far as cryptozoology is concerned - because it became the type specimen of a species of rodent hitherto unknown to science but which was so dramatic in form that an entirely new taxonomic family was created in order to accommodate it. And the name of this radical rodent? The African crested rat, also known as the maned rat, whose remarkable nature is not confined to its appearance but also embraces an equally extraordinary talent for interspecific impersonation. Intrigued? Then read on...

Returning home to Europe in 1866 after spending some time on the Mascarene island of Reunion, traveller M. Imhaus stopped off at Aden for a few hours. While there he met a man with a most interesting pet - a large rodent of very distinctive appearance, belonging to a species completely unknown to science. Of stout build with small head and short limbs but long bushy tail, it was principally blackish-brown in colour, but its forehead and the tip of its tail were white, and its flanks each bore a lengthy horizontal strip of pale brown, edged with white and with a white stripe running along its centre. This strip was separated by a type of furrow from the notably long dark hairs borne upon the middle of the animal’s back, and also upon its tail, which were erectile, capable of yielding a very odd-looking mane or crest. 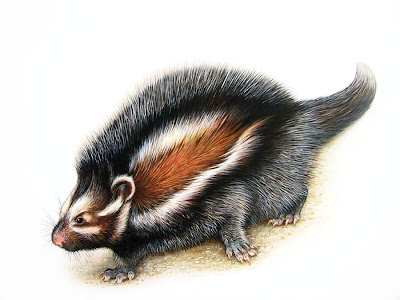 Imhaus bought the man’s pet, and took it to France’s Garden of Acclimatisation in the Bois de Boulogne, where it thrived for about 18 months upon a diet of maize, vegetables, and bread, and slept during the day. After its death, its body attracted the attention of acclaimed zoologist Prof. Alphonse Milne-Edwards, whose studies of it uncovered sufficient anatomical idiosyncrasies to warrant the creation for its species of a brand new taxonomic family, Lophiomyidae.

In his description of this radically new rodent, published in 1867, Milne-Edwards named it Lophiomys imhausi - ‘Imhaus’s maned rat’. Distributed from Kenya in eastern Africa northwards as far as Ethiopia’s border with Sudan, and measuring up to 21 in long (females are larger than males), its closest relatives appear to be the murids (mice, rats, etc), with which it is nowadays classed by some authorities as a distinct subfamily, Lophiomyinae. 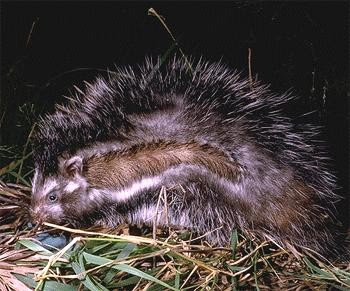 A sluggish, generally slow-moving animal, undoubtedly the most distinctive feature of this species is its erectile mane of hair, which has a very important function. The maned rat has few enemies - and little wonder. When challenged by a would-be predator, it raises its mane, and instantly ‘transforms’ into a surprisingly convincing replica of one of the most feared medium-sized mammals of Africa - a long-furred relative of the weasels known as the zorilla or striped polecat Ictonyx striatus.

Although only distantly related to the New World skunks, the zorilla is extraordinarily similar to them, due not only to its vivid black and white fur, but also to its deadly propensity for ejecting streams of unutterably foul-smelling liquid from its anal glands at anything foolish enough to approach it too closely. So dreaded and dreadful is its malodorous arsenal that if a zorilla approaches a lion kill, the lions will back away and wait impatiently but impotently at a safe distance until the little zorilla has eaten its fill and departed. Not for nothing is it referred to by many tribes as ‘Father of the Stenches’! 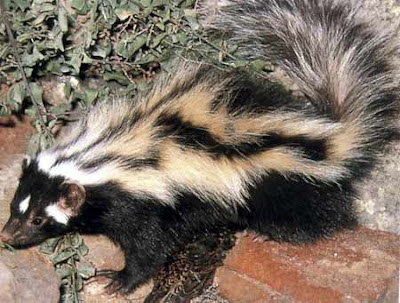 Thus, by impersonating this Dark Continent untouchable, the relatively harmless maned rat (it does have a strong bite) is assured of similar immunity from most would-be assailants. If, however, it does fail to convince, it can actually exude a very toxic glandular secretion that is sufficiently potent to kill a dog if swallowed.

This ShukerNature post is an excerpt from my book Extraordinary Animals Revisited: From Singing Dogs To Serpent Kings (CFZ Press: Bideford, 2007). 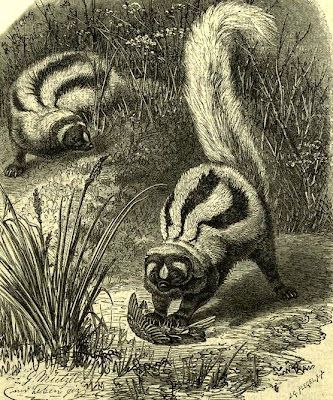