WHAT MAY BE A HITHERTO-UNDOCUMENTED SIGHTING OF THE LOCH NESS MONSTER, GIVEN TO ME BY TIM DINSDALE ON 25 JULY 1987

The first Nessie book that I ever read was this one, by Tim Dinsdale, purchased for me as a child by my mother

Back in 1986, veteran Loch Ness monster researcher Tim Dinsdale (1924-1987) had corresponded with me in relation to a very different but equally intriguing water monster that formed the basis of my first major cryptozoological investigation – Gambo, the Gambian sea serpent. Consequently, when I attended the International Society of Cryptozoology's two-day symposium held at the Royal Museum of Scotland in Edinburgh on 25-26 July 1987, Day 1 of which was devoted to Nessie and at which Tim was one of the speakers (click here to read my reporting of this symposium), I lost no time in introducing myself to him so that I could thank him directly for his kind interest and encouragement in my own fledgling cryptozoological researches. 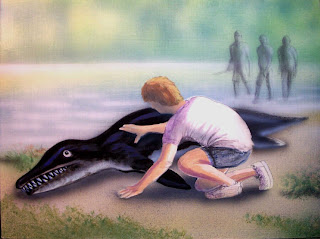 
In response, Tim gave me a copy of a most interesting Nessie sighting that an eyewitness had recently sent to him. He didn't provide me with the eyewitness's name, because he no doubt intended to publish an exclusive report of it in some future publication. Tragically, however, only a few months after the ISC symposium, on 14 December 1987 Tim suffered a fatal heart attack.

Recently, I came upon the copy of this sighting that Tim had given me all those years ago, and as I am unsure whether it was ever made public, I am now doing so, by including here on ShukerNature the sketches of what the eyewitness claimed to have seen (click image to enlarge it), together with the sparse details concerning it that I have on file, in case this may be of benefit to other Nessie researchers. 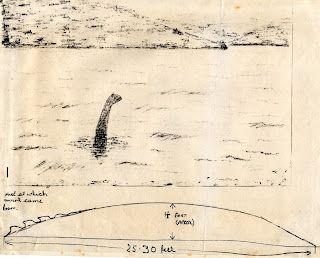 The eyewitness observed a typical 'periscope' shape projecting up through the water surface, yielding an outline reminiscent of the object in the controversial Surgeon's Photo. He/she also saw a very long hump visible above the water surface, approximately 25-30 ft in length and approximately 1.5 ft high, with what looked like distinct backward-pointing serrations running along the posterior portion of its upper surface.

If anyone has any further knowledge concerning this Nessie sighting, I'd be delighted to receive details here on ShukerNature. 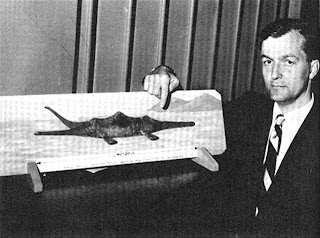