As many of you know, I've always been interested in the more unusual, enigmatic members of the animal kingdom, those that rarely attract such widespread attention as the giant pandas and great white sharks of this world.

And one creature that certainly embodies 'unusual' and 'enigmatic' is the nandinia Nandinia binotata, which was formally named and described by British zoologist John Edward Gray in 1830 (and originally split into two separate species - one West African and one East African). I first learnt of this cat-sized arboreal creature's existence when, as a child, my mother bought for me a huge lavishly-illustrated book, almost as big as me (or at least it seemed to me to be at the time!), entitled Animals of Africa. Authored by Robert Wolff, it contained dozens of spectacular full-colour paintings by Robert Dallet, including one of the nandinia.

Even its name, 'nandinia', intrigued me, because it sounded so unlike any other animal name I'd ever heard, to the extent that even though I subsequently learnt that this species was also referred to as the African palm civet or two-spotted palm civet, as far as I'm concerned it has been and always will be the nandinia. It is derived, incidentally, from 'nandinie' – a local West African name for this species. 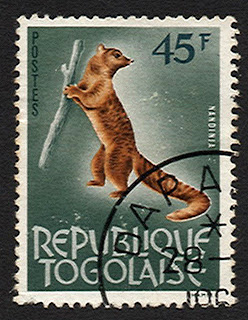 The nandinia depicted upon a Togo postage stamp issued in 1965

Looking at its picture in Animals of Africa, which also opens this present ShukerNature blog post, the nandinia seemed to me to be a curious combination of cat and civet, with an attractive spotted coat and an exceptionally long tail, yet also indefinably different from anything else I'd ever seen. This proved to be quite a prescient assessment on my part, particularly at such a tender age, because although for many years the nandinia has been classed as a viverrid, i.e. a relative of civets and genets, in recent times it has experienced a very dramatic recategorisation.

Genetic studies have suggested that during the evolution of the carnivorans (i.e. those species belonging to the mammalian order Carnivora), the nandinia split off from the lineage leading to cats and viverrids before these latter two taxonomic families split from each other. As a result, it has been assigned to a taxonomic family of its own, Nandiniidae, of which it is the only member. As it is therefore an ex-palm civet now, this renders its alternative name of nandinia taxonomically unambiguous and thus much more desirable for use – another childhood impression of mine that has since proved prophetic.

An engraving of the nandinia from Rev. J.G. Wood's three-volume animal encyclopaedia The Illustrated Natural History (1859-63)

But that was not the only surprise that the fascinating little nandinia had in store for me. While researching gliding vertebrates for a chapter in my book Extraordinary Animals Worldwide (1991), which reappeared in expanded form within its updated edition, Extraordinary Animals Revisited (2007), I accidentally discovered that the nandinia possessed a truly extraordinary but hitherto scarcely-publicised talent. 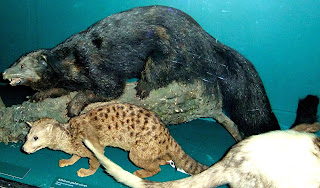 Resembling a portly, round-headed genet with very dense, woolly brown fur dappled with small black spots, and an extremely long, barred tail, but without any form of gliding membrane or other device for achieving aeronautical success, the nandinia is the most unexpected and least known of all mammals with gliding prowess. Indeed, I learnt of its surprising capability quite by accident myself. While flipping through some African Wild Life issues from 1958 in search of an account on a totally different subject, serendipity brought to my attention a fascinating letter by G.V. Thorneycroft. 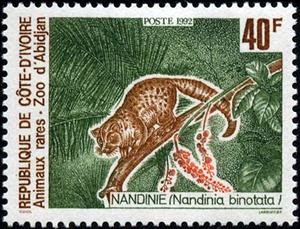 In his letter, Thorneycroft recalled seeing two nandinias high up in a tree one morning on his farm at Zomba, Nyasaland (now Malawi). One became frightened by his dogs, standing at the foot of the tree barking loudly, and as a result it chose to exit the tree in a quite astonishing manner. As noted by Thorneycroft, the nandinia:

"...made a leap from a high branch and volplaned to the ground with legs and tail outstretched. It made a perfect landing on the bare ground, ran to another tree from which it again volplaned and repeated the action."

The mechanism responsible for this highly unexpected capability from as bulky and unlikely a gliding animal as the nandinia was revealed by Thorneycroft as follows:

"What struck me was the graceful way it planed or almost floated to the ground at an angle greater than half a right-angle so that it landed at a considerable distance from the tree it was in. Its tail was extended straight behind, the long hair at the base seeming to be ‘on end’ and its legs stretched out as far as possible. On each occasion it made a perfect four-point landing."

In short, the nandinia provided a surprising but nonetheless wholly corresponding verification of naturalist H.B. Cott’s classic findings with gliding frogs back in 1926 – namely, that a fully outstretched body and limbs (with or without the possession of a gliding membrane) is very important for successful aerial accomplishment.

I have never seen any further reports of parachuting ex-palm civets, but the nandinia has a very wide distribution across tropical Africa and has even been described as probably the most common small species of forest-dwelling carnivoran there. So unless this instance of volplaning was unique behaviour exhibiting only by the single specimen observed by Thorneycroft, other occurrences must surely have been spied. Perhaps one day, therefore, some additional cases will be documented, substantiating the nandinia's claim to be the world's only species of temporarily-airborne carnivoran as opposed to merely being dismissed as a furry flight of fancy, in every sense.

One further nandinian controversy. Four nandinia subspecies are currently recognised (namely: Nandinia binotata arborea, N. b. binotata, N. b. gerrardi, and N. b. intensa), but in earlier days a much more mysterious form, nowadays relegated to a mere synonym of Nandinia binotata, was also recognised. This was Paradoxurus hamiltonii, Hamilton's palm civet, formally named and described by John Edward Gray in 1832. The only image of P. hamiltonii that I have seen is the following one, drawn by the eminent natural history artist Benjamin Waterhouse Hawkins in 1833-4:

Although a very elegant image, it does not appear to be a particularly accurate depiction of a nandinia (which is itself surprising for an artist of Hawkins's renown), but there may be good reason for this, inasmuch as the creature so depicted might not actually be a nandinia! Why I am so curious about it is the fact that the book in which Hawkins's painting originally appeared is the second volume of a major work authored by Thomas Hardwicke, entitled Illustrations of Indian Zoology.

Yet whereas all other palm civets are indeed Asian, the nandinia has always been an oddity among such civets zoogeographically, in that it is exclusively African. So if P. hamiltonii and N. binotata are truly nothing more than two different names for one and the same species, how can we explain the presence of an illustration of P. hamiltonii in a book devoted to the mammals of India?

As far as I am aware, the aptly-named Paradoxurus hamiltonii remains a paradox today, but one that has long been forgotten. If anyone out there can shed any light on this anomaly, I'd be very happy to receive details.

The nandinia depicted upon a Liberian postage stamp issued in 1918