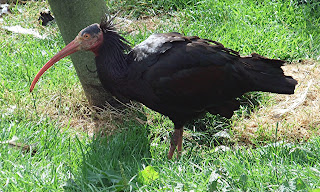 The famous Greek legend featuring Heracles and the dreaded Stymphalian birds. A non-existent forest raven native to the lofty peaks of the Swiss Alps. The epic biblical story of Noah and the Great Flood. What conceivable connection could exist between such ostensibly disparate subjects as these? The answer is a genuine rara avis called Geronticus - a baffling bird encompassed by all manner of myths and mysteries, drawn together from the dreams of the past. 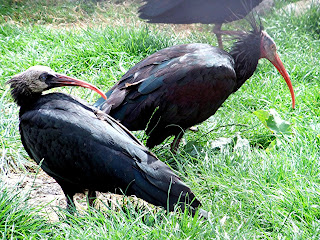 A young waldrapp (on left) and an adult (Dr Karl Shuker)

One of the twelve great labours imposed upon the mighty Greek hero Heracles by the cowardly King Eurystheus of Argolis was to vanquish the Stymphalides - a flock of brass-winged, crane-sized, ibis-like birds with crests and a craving for human flesh, which frequented the Stymphalian marshes in Arcadia. With the aid of a loudly resonating pair of brass rattles forged by the fire god Hephaestus and loaned to him by the war goddess Athena, however, Heracles was able to scare the birds out of their marshy domain and into flight. Once they were airborne, wheeling overhead in a frenzy of fright engendered by the ear-splitting cacophony of the rattles, he then proceeded to fire volley after volley of arrows into their soft, unprotected bellies, killing some and sending the remainder flying far away towards the Black Sea, never to return to Arcadia.

These fearful bird-monsters were originally thought to constitute an imaginative personification of marsh fever, but in 1987 Swiss ornithologist Michael Desfayes proposed that they may actually have been based upon a real (albeit smaller, harmless) bird. 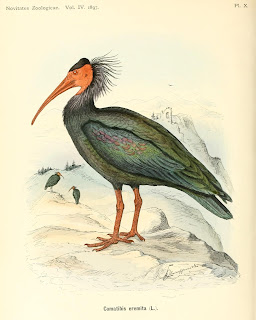 Also called the hermit ibis, the waldrapp Geronticus eremita is a very rare relative of the more familiar sacred ibis of Egypt and South America's scarlet ibis, and sports a crest, a long red beak, and bronze-coloured wings. It is nowadays restricted to a scattering of sites in Morocco, Algeria, Syria, and one notable locality in Turkey; it has also been reintroduced into Spain and Austria. However, it was once much more widespread, known from as far west as Germany, Austria, and Switzerland (see below). Moreover, after comparing its morphology with classic descriptions of the Stymphalides, Desfayes opined that they were one and the same species, and that Greece should thus be added to the waldrapp's former distribution range.

Not everyone agrees with his opinion - one researcher suggested that the real identity of the Stymphalides was the sacred ibis Threskiornis aethiopicus, which did once exist in Greece. However, this identity was based upon the evidence of a single depiction of the Stymphalides as black and white birds, whereas there are many others depicting them in other forms, so this particular identification is by definition highly selective. Perhaps the strangest and most distinctive portrayal of the Stymphalides appears in a painting from c.1500 by Albrecht Dürer in which they are represented with the heads and upper torsos (including arms and breasts) of women, and long mermaid-like fishtails! 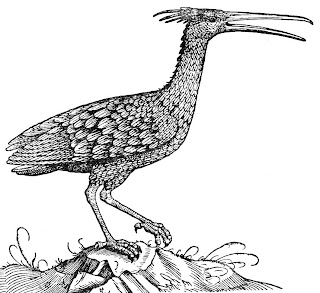 Another longstanding mystery bird from Europe was the Swiss forest raven, described and portrayed by Zurich scholar Conrad Gesner in his Historiae Animalium, published in 1555. Later writers dismissed this bird as imaginary, because it seemed to resemble a crested ibis rather than a raven, and there was no ibis-like bird known from Switzerland. Not until 1941 was the mystery finally resolved, when geologically Recent remains of waldrapps were excavated from the Glarus Alps and sites near Solothurn. 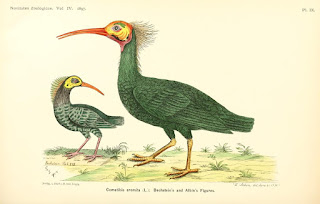 This distinctive bird corresponds perfectly with Gesner's description and depiction of his perplexing 'forest raven', and it is now known that way back in 1504 the waldrapp (whose name translates from German as 'wood crow') was formally designated a protected species in the Alps by Archbishop Leonard of Salzburg. Tragically, however, his decree was largely ignored, and the waldrapp's nestlings were hunted mercilessly as prized culinary delicacies. Less than a century later it had become extinct here, swiftly fading from memory and ultimately transforming into an apparently mythical, non-existent bird known only from a medieval bestiary. 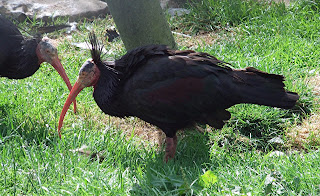 It is likely that the waldrapp would have become extinct in Turkey too, but here it has been saved not only by modern conservationist zeal but also by traditional religious belief. According to ancient Turkish lore, the waldrapp was one of the birds released by Noah after the Great Flood, and symbolises fertility - giving the people of Birecik, site of this species' only notable Turkish colony, an added incentive for perpetuating its tenuous survival here. 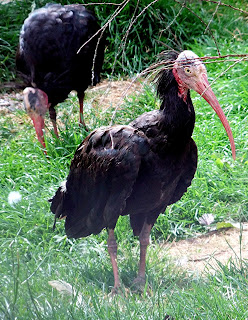