PRESENTING THE TSMOK STATUE AT LAKE LEPEL IN BELARUS - AN AQUATIC DRAGON, A FLIPPERED WATER-DEER, OR A LONG-NECKED SEAL? 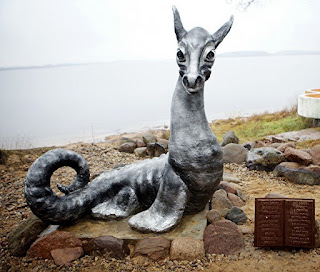 Earlier this month, on 8 August 2015, the city of Lepel in Belarus's Vitebsk Province hosted an international festival of mythology entitled 'On a Visit to Lepel Tsmok' (click here to access its full programme of events). Among the varied array of subjects featured in this festival's talks and presentations was Lepel's very own legendary monster, one that was once virtually unknown to the outside world. Thanks to a wonderful statue here, however, all that is now changing, rapidly. But, as they say, to begin at the beginning… 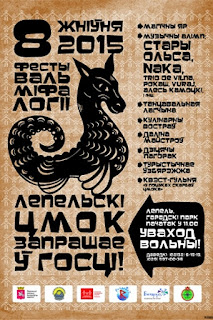 On 14 September 2013, Lepel celebrated its 574th birthday – and as part of those celebrations, a specially-commissioned statue was officially installed on the shores of Lake Lepel, a large body of freshwater that has always been a popular sight and attraction among visitors and locals alike here, and bordered today by Tract Tsmok, the city's park. Now, however, it is even more special, thanks to this remarkable, unique statue – which, following its ceremonial unveiling on 9 November 2013, swiftly become a veritable magnet for photo opportunities, its success in attracting tourists eager to see it and be photographed alongside it exceeding even the already high expectations held by the city's ruling council when originally sanctioning its creation.

For not only is the Lake Lepel statue both spectacular and highly photogenic, but in addition its subject is certainly no ordinary one. What it portrays is a tsmok – a legendary medieval water dragon of a type scarcely known outside Belarus and Lithuania (until 1793, Lepel was part of Lithuania, lying directly to the west of Belarus), but a few of which are said still to inhabit this lake's mysterious depths, at least according to traditional Lepel lore. 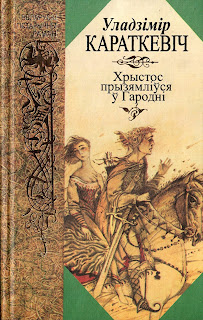 The idea for the statue, which has been formally dubbed Lepel Tsmok, came from ethnographer Vladimir Shushkevich – aka 'Valatsuga' (Valadar) – whose home city is Lepel, where he has lived for many years, and who has a longstanding interest in the mythology of its fabled water beasts. Fellow Belarusian ethnographer Nikolai Nikiforovsky has also written about tsmoks, and they were mentioned by Slavic culture researcher Alexander Afanasyev too.

In particular, however, Shushkevich is well-acquainted with esteemed Belarusian author Vladzimir Karatkievich's historical novel Hrystos Pryzyamlіўsya ¢ Garodnі: Evangelle Іudy Hell ('Christ Has Landed in Grodno: The Gospel of Judas'), published in 1990, which in its first section, 'The Fall of the Fiery Serpent', draws upon Lepel folklore chronicling how 40 tsmoks were allegedly killed overnight in Lake Lepel during the Middle Ages. It also describes their morphological appearance, referring to them as behemoths with the head of a deer or snake and the body of a seal.

After Shushkevich conceived and publicised at various cultural and tourist festivals his proposed project of producing this tsmok statue, it was formally approved by an international jury from the European Union, as were nine other initiatives, all of which focused upon promoting sustainable rural tourism in Russia and Belarus. However, it was Shushkevich's statue project that received the largest EU grant – 2900 euros. 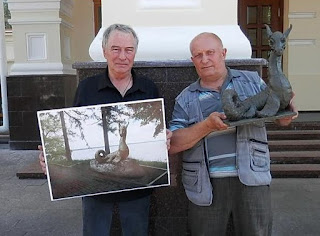 The sculptor selected by the Arts Council in the Regional Executive Committee to produce Lepel Tsmok was Leo Oganov (sometimes spelt Aganov) from Minsk, Belarus's capital, who had already received plaudits for a sculpture honouring a Grand Duchy of Lithuania leader that he had presented to Lepel in 2010, and which stands in the city's main square. (There is also a mermaid statue in Lepel, produced by Igor Golubev a year earlier.) Oganov prepared plasticine scale models of several different reconstructions of the tsmok, one of which resembled a typical fire-breathing, winged, non-aquatic dragon, but after much debate the eventual choice was very different, much more interesting, and extremely eyecatching.

The material that Oganov's Lepel Tsmok would be made from also became an important subject for debate. It was felt that bronze would prove too expensive, but other, more viable options included cast iron or silumin (a silicon-aluminium alloy). Cast iron was the final choice, bestowing upon it a silvery sheen reminiscent of shining fish scales, an appropriate look for an aquatic creature. When the statue was complete, it weighed just over 1 ton, and was 5.5 ft tall. 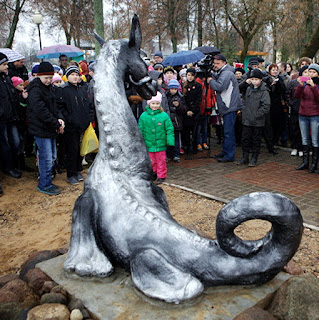 Oganov drew inspiration for Lepel Tsmok's morphology from traditional, folkloric descriptions of this water monster, including those contained in Karatkievich's above-cited novel, but certain potentially fragile and therefore breakable features present in his original model of it needed to be amended or omitted entirely, in order to avoid the risk of subsequent damage to the statue once installed. These included a 'moustache' of catfish-like barbels around its mouth (omitted), a crest upon its head (reduced to a bare minimum), and a mane upon its neck (omitted). It was also made more people-friendly than the original tsmok dragons of lore (as well as less expensive to produce) by excluding wings, plus any suggestion of fire-breathing, human-devouring, and general offensiveness, but adding an amiable, friendly expression to its face.

The result is one of the most distinctive cryptid/legendary monster representations that I have ever seen (albeit only online so far). Overall,  Lepel Tsmok resembles a fascinating composite of aquatic dragon, female (antler-lacking) water-deer, and long-necked seal. For whereas the long curling scaly tail is definitely dragonesque, its face and large ears are decidedly cervine (or even equine if its mane had been retained), but its overall body shape and flippers instantly recall those of a seal, particularly a long-necked one (as documented in detail by me here and here on ShukerNature). 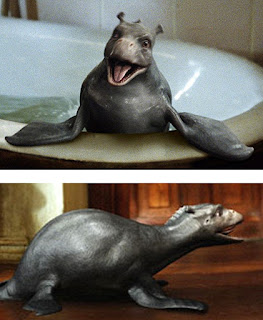 Two stills from the 2007 movie The Water Horse: Legend of the Deep, showing this fictional cryptid in its small, juvenile stage (© Columbia Pictures / inclusion here strictly on Fair Use/non-commercial basis only)

It also reminds me a little of the juvenile stage of the eponymous fictional cryptid in the wonderful 2007 fantasy movie The Water Horse: Legend of the Deep, which was based upon British author Dick King-Smith's children's novel The Water Horse (1990).

But just to confirm that Oganov's silvery tsmok is indeed true if not to life then at least to lore, placed alongside its statue in its installed form as an incorporated part of the complete sculpture is a representation in cast iron of an open book, upon whose pages is carved a written description of the tsmok's appearance as excerpted directly from Karatkievich's novel. 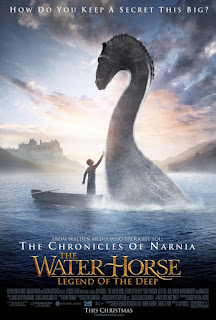 Publicity poster for the 2007 movie The Water Horse: Legend of the Deep (© Columbia Pictures / inclusion here strictly on Fair Use/non-commercial basis only)

Today, almost two years on from its ceremonial unveiling, Oganov's Lepel Tsmok is inordinately popular, a veritable Nessie of the East has been born, with souvenirs and other likenesses of it sold nearby, and photos of visitors posing alongside it contained in numerous holiday albums and shared countless times online in social networking sites.

It is especially favoured by visitors about to be wed or newly-wed, however, because according to Lepel legend yet again, if offerings of food and drink from a wedding feast are brought to a tsmok's watery abode and left there, for it to consume at its leisure, the monster will bless the marriage and bestow good fortune upon the bride and groom. Today, such tributes are not normally brought to the tsmok statue, but newly-weds nonetheless derive great joy from posing alongside it, if only on the off-chance that doing so will in itself be sufficient for the magical, elusive creature that this statue portrays to look upon their union benevolently and grant them future happiness together.

From an obscure provincial monster of (very) local fable and fame, the tsmok seems set to acquire international celebrity status before much longer. And when it does, remember that, at least in English, you read it here first! 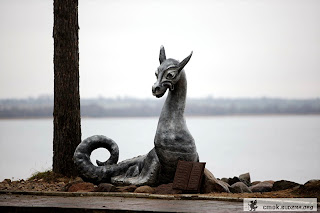 Finally: Poland's traditional folklore contains a dragon-related tale that features the similar-sounding Smok. This was the dragon of Wawel Hill in Krakow, Poland, which had terrorised the city until Skuba, a canny cobbler's apprentice, stuffed a baited lamb with sulphur. After eating it, Smok was consumed with such a fiery thirst that he drank without pause from a nearby stream until finally the sulphur reacting with the vast quantity of imbibed water caused the doomed dragon to explode.

Incidentally, in 2011 a very large species of Polish carnivorous archosaurian reptile from the late Triassic Period 205-200 million years that may constitute a species of theropod dinosaur was officially christened Smok wawelski, in honour of this Polish dragon. 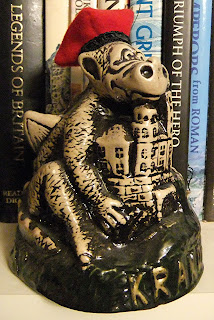 A souvenir ornament of Krakow's Smok, obtained from a friend several years ago (© Dr Karl Shuker)

Until my present ShukerNature blog article, virtually no information about the Belarusian tsmok existed in English, so I have relied very extensively upon translations of various Belarusian and Russian accounts as my primary sources. Of these, a detailed online news report in Cyrillic script by Tatiana Matveeva, posted on 15 June 2013, was particularly beneficial to my researches – click here to access it directly.

And to read all about plenty of other unusual and unexpected dragon varieties from around the world, be sure to check out my recent book Dragons in Zoology, Cryptozoology, and Culture. 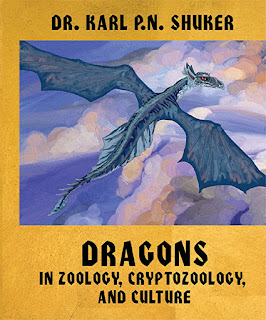