CRYPTO-SELFIES! IN THE PICTURE WITH SOME SERIOUSLY WEIRD – BUT WONDERFUL – WILDLIFE 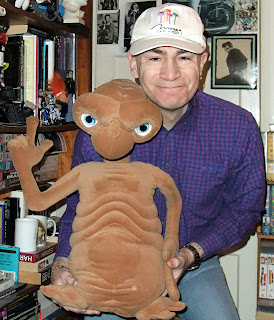 With E.T. – how could I not take pity on this errant extraterrestrial and bring him back home with me? In any case, he must be happy here – he hasn't phoned home once, which is just as well, bearing in mind the cost of intergalactic telephone calls these days! (© Dr Karl Shuker)

Over the years, I've found myself sharing space in photographs – selfies, as they'd be called nowadays – with some exceedingly strange entities (and those are just my friends!). But seriously, browsing through my albums recently I came upon a considerable number featuring me alongside some truly weird – but indisputably wonderful – wildlife. So here, as one of my more light-hearted ShukerNature contributions, and the first of an occasional series, is a dozen of my most memorable crypto-selfies, annotated with a bountiful abundance of decidedly (ir)relevant information… 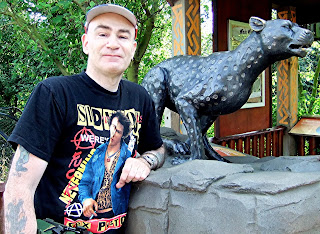 Alongside a black cheetah statue at Colchester Zoo, in Essex, England, which I visited in 2013; as noted in my books Mystery Cats of the World and Cats of Magic, Mythology, and Mystery, a few records of all-black (melanistic) cheetahs are indeed on file, including a specimen spied in the company of a normal cheetah by Lesley D.E.F. Vesey-Fitzgerald in Zambia during the first half of the 20th Century, and another one sighted in Kenya's Trans-Nzoia District by H.F. Stoneham in 1925 (© Dr Karl Shuker) 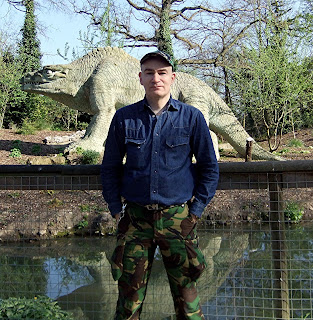 With one of the famous 19th-Century dinosaur statues at Crystal Palace Park in Bromley, London, which I visited in 2009; created by famous sculptor Benjamin Waterhouse Hawkins (1807-1894) and totally outdated now, this one is meant to be a Megalosaurus, but its reconstruction was guided by the popular yet erroneous belief current at that time that dinosaurs resembled giant lizards (© Dr Karl Shuker) 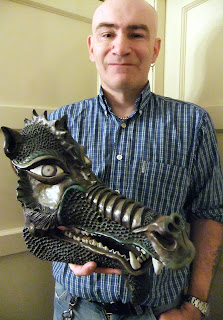 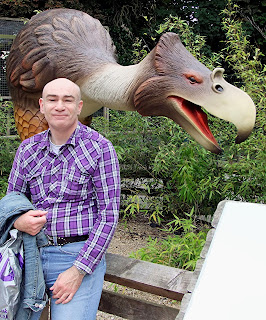 At Drayton Manor Park and Zoo, in Staffordshire, England, standing somewhat warily alongside a disconcertingly life-like, life-sized replica of North America's late Pliocene/early Pleistocene terror bird Titanis walleri, which may have stood up to 8 ft tall – check out my book The Menagerie of Marvels for an extensive chapter documenting the history of these flightless but fleet-footed and sometimes truly gargantuan carnivorous birds (© Dr Karl Shuker) 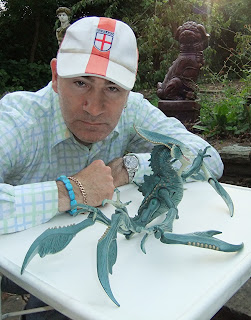 With an acklay – when I purchased this model at a market a few years ago, I had no idea what the creature was that it represented, but thanks to some knowledgeable sci-fi enthusiast friends on Facebook I soon learnt that it was an acklay, a huge non-sentient carnivore up to 11.5 ft tall, hailing from the planet Vendaxa in the Star Wars canon's universe (© Dr Karl Shuker) 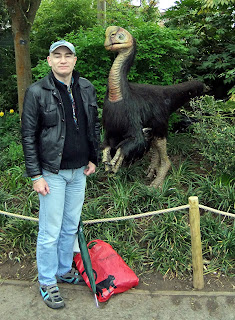 Alongside a life-sized animatronic model of the feathered dinosaur Citipati at Bristol Zoo, England, in 2013; an oviraptorid theropod from Mongolia's Late Cretaceous period, Citipati was named after a pair of murdered meditating monks from Tibetan Buddhist folklore, it possessed a large toothless beak, and it stood as large as a present-day emu; in this particular reconstruction, it looks decidedly cassowary-like (© Dr Karl Shuker) 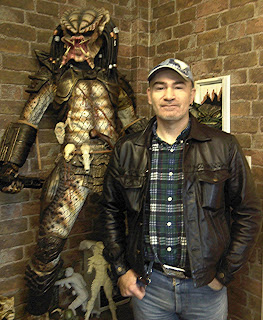 There I was, minding my own business walking round the small West Midlands, England, town of Cradley Heath, when, happening to step inside a sci-fi/comic shop, who should I encounter there but the Predator! I can only assume that my trusty leather biker jacket helped to conceal me from its thermal imaging capability long enough for me to get this photo snapped of me alongside it; if you're wondering why the photo is a little blurry, it's because the (ex) person taking it for me suddenly realised that unlike me he wasn't wearing anything to cloak his thermal image – I won't tell you what happened to him next, as I don't want to give you nightmares – suffice it to say that at least it kept the Predator occupied long enough for me to make my excuses and exit stage right! (© Dr Karl Shuker) 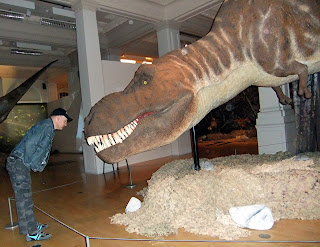 Face to face with a life-sized Tyrannosaurus rex model at a dedicated T. rex exhibition held at Birmingham Museum & Art Gallery in the West Midlands, England, during 2010 – it's not often that you get the chance to stare down a T. rex, although in this particular instance the only thing that I seemed to be staring down was its nostrils; Jurassic Park claimed that as long as you stood perfectly still, a T. rex would be unable to detect you, so what better time to put this claim to the test?? © Dr Karl Shuker) 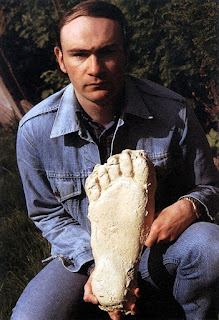 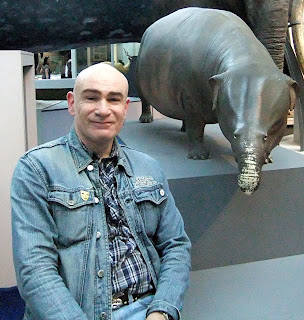 Sharing some quality time with a life-sized Moeritherium statue at London's Natural History Museum in 2014; this was a very early genus of proboscidean living during the Eocene epoch 37-35 million years ago in northern and western Africa, but dying out without giving rise to any modern-day elephant lineage; initially I was very puzzled that this statue's trunk seemed to have been rubbed so vigorously that much of its surface had lost its colour – why would this have happened? Then Facebook friend Adam Naworal reminded me that it was traditional to rub elephant statues for good luck, so that may well explain the otherwise anomalous case of the mutilated Moeritherium; fortunately, however, this doesn't seem to have traumatised him, as he seemed happy enough to be with me (© Dr Karl Shuker) 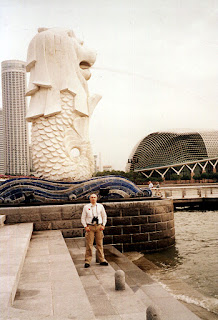 Alongside Singapore's iconic merlion fountain-statue in 2005; the merlion is a legendary lion-headed fish known worldwide as a symbol of Singapore, and it is epitomised by this magnificent 28-ft-tall statue created by sculptor Lim Nang Seng during 1971-1972, and relocated in 2002 to a promontory in Singapore's Merlion Park (© Dr Karl Shuker)

I hope that you've enjoyed this inaugural meander through my collection of crypto-selfies. Look out for further selections in future ShukerNature posts! 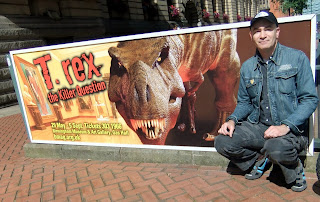