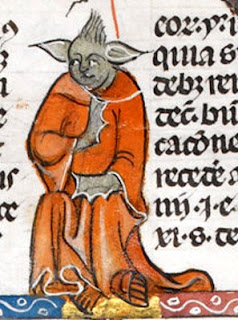 The Yoda lookalike figure from the Smithfield Decretals (public domain)

The long-awaited latest Star Wars film – Episode VII: The Force Awakens – was released this week, so it seems timely to upload onto ShukerNature the following article of mine that I wrote a while back after purchasing the book Medieval Monsters but never got around to doing anything with, until now…

Long ago, in a galaxy far far away – or, more precisely, in March 2015 on p. 5 of a then newly-published book entitled Medieval Monsters, written by medieval historian Damien Kempf and art historian Maria L. Gilbert – an extraordinary illustration appeared that swiftly attracted considerable media attention, spawning all manner of newspaper and online articles during mid-April. The illustration in question was a figure from an illuminated manuscript dating from the 14th Century – a figure reproduced at the beginning of this ShukerNature blog article and which, as noted by those numerous media articles, just so happened to bear a striking resemblance to none other than Yoda, the venerable Jedi Grand Master from the Star Wars movie franchise! 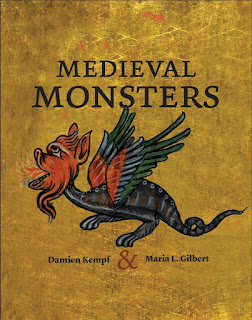 Yoda first appeared as a (relatively) sprightly 900-year-old in The Empire Strikes Back – produced by Lucasfilm Ltd, released in 1980 and constituting the second film in the ongoing Star Wars series. In contrast, his Middle Ages doppelgänger appeared over 600 years earlier, in the Smithfield Decretals (a colloquial name deriving from its earliest known provenance, the Augustinian priory of St Bartholomew's at Smithfield, its official title being the Decretals of Gregory IX with glossa ordinaria [i.e. commentary] of Bernard of Parma). This is a parchment codex in Latin, which dates from c.1300-1340, and can be found in the British Library listed as Royal MS 10 E IV (with the mystery figure appearing on f. 30v). Written in southern France (probably Toulouse), the original manuscript arrived in London during the early 1300s where numerous marginal illustrations were added. It was presented to the British Museum in 1757 by King George II as part of the Old Royal Library.

The likeness of the strange entity in this early historical manuscript to Yoda was not actually commented upon in Medieval Monsters, but was highlighted by British Library curator Julian Harrison in his blog Medieval Manuscripts on 17 December 2015 (in a guest post on this same blog for 14 April 2015, the authors of Medieval Monsters had briefly alluded to it in a whimsical poem about their book's contents). Looking at this enigmatic figure, there is unquestionably a similarity, from its monk-like attire, and long ears sticking out at right angles from its head, to its spiky hands, greenish skin, and facial expression. Consequently, once the various media articles aired online, it was not long before fevered speculation arose as to whether Yoda was indeed based upon the enigmatic image from the Smithfield Decretals. 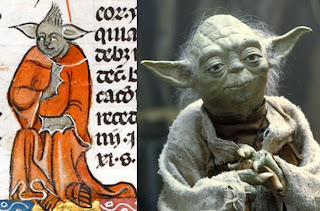 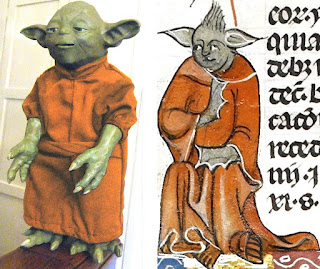 However, the designer of Yoda's distinctive appearance, the late Stuart Freeborn (d. 2013), a British motion picture make-up artist, always stated that the character's face was based upon his own, and that his eyes were inspired by those of Einstein in order to give them a wise but kindly look. Moreover, it seems highly unlikely to say the least that back in the pre-internet years of the 1970s when he was creating Yoda's character, Freeborn was even aware of this exceedingly obscure centuries-old French manuscript, let alone had access to a copy of it.

So if not a prototype for Yoda, what exactly was that medieval manuscript-featured monk with the big ears meant to represent? Some articles erroneously claimed that this orange-robed figure appeared in a retelling of the biblical story of Samson present within the Smithfield Decretals, but in reality the latter manuscript is a collection of canon law composed during the 13th Century that served as an addition to the Decree of Gratian, the main collection of canon law composed during the 12th Century. (Decretals are actually collections of papal letters that compile decrees on church law.) Consequently, as postulated on the Auckland Theology & Religious Studies blog, the Yoda impersonator was quite possibly intended to represent the devil attired as a demonic doctor of canon law, signifying that some clerics charged to uphold the law were actually corrupt and exploitative of their flock. The only link, conversely, to Samson is a series of illustrations concerning his life that run along the bottom edge of certain folios of the Smithfield Decretals (including the folio containing the Yoda image in the main text), but which have no connection whatsoever with the subject of the main text. 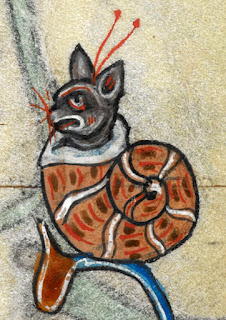 However, it is conceivable that this controversial figure may have no religious significance at all, but was merely inserted as a joke by one of the manuscript's illuminators. The creation of non-existent entities by illuminators as sly subversive humour or merely to relieve the tedium of the lengthy task at hand when copying or illustrating such manuscripts is well known, and has even resulted in the recurrent appearance of certain well-defined but entirely fictitious creatures, such as the snail-cat, for instance, as documented by me in a previous ShukerNature article (click here).

Consequently, 'Yoda of the Smithfield Decretals' may well be nothing more than a medieval doodle, whose similarity to the Star Wars character is actually only a superficial one, but which has been blown out of all proportion by the shared monk attire. During the 9 months since Medieval Monsters was published, all manner of other explanations for the ostensible correspondence between the two figures have been aired online, ranging from the sober to the surreal. However, my personal favourite is one alleging that perhaps a time traveller viewed a Star Wars film featuring Yoda, then went back in time to the creation of the Smithfield Decretals and somehow succeeded in surreptitiously including a depiction of Yoda within its text. 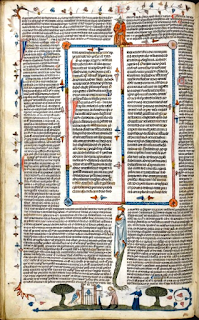