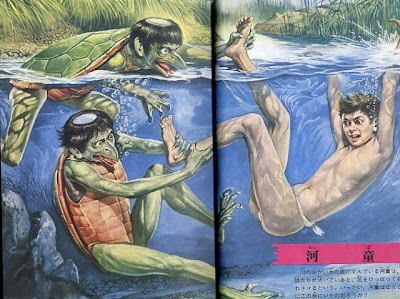 Not long ago, graphics artist Andy Paciorek alerted me to a truly extraordinary Japanese book on the subject of yokai - the traditional monsters of Japanese legend and folklore. Published in 1972, it was authored by Sato Arifumi, and its title, Nihon Youkai Zukan (日本妖怪図鑑), translates into English as Illustrated Book of Japanese Monsters. Yet although it was ostensibly written for children, its extremely dramatic full-colour and half-tone pictures, drawn by celebrated Manga artist Gojin Ishihara, are often so terrifying and grotesque that I can only assume that kids in Japan are made of very stern stuff indeed!
Nevertheless, slotted among the bloodcurdling images of horrific female entities with hyperextensible necks, maniacally-grinning strangler demons, bizarre ceiling-dwelling scare-ghouls, and numerous other equally macabre monstrosities in human or semi-human form, are representations of various animal yokai too. Some of these mythological creatures are fairly well known outside Japan, but many of them are not.
So here is a concise account from me for each in a brief but diverse selection of examples that appear within Arifumi’s remarkable book (which, sadly, is now long since out of print), together with Ishihara’s original, unforgettable illustrations (collected online by Pink Tentacle at: http://pinktentacle.com/2010/07/macabre-kids-book-art-by-gojin-ishihara/).
THE KAPPA
As pictured in the Ishihara illustration opening this present ShukerNature blog article, the kappa is a freshwater sprite generally likened to a bipedal humanoid frog the size of a child but bearing a tortoise’s shell on its back, and, most striking of all, an open water-containing cavity (shaped like a lily pad) on top of its head. Probably the most internationally famous representative of Japan’s vast array of animal yokai, the kappa is usually considered to be merely mischievous, but it can be much more malicious, pulling humans underwater to rape or even drown them.
Yet in spite of this dark side to its nature, the kappa is, incongruously, well known for being inordinately polite – a weakness that humans often capitalise upon if confronted by one of these web-footed, scaly-skinned, carapace-bearing man-frogs. Its magical powers emanate from its head’s cavity, which contains water obtained from its own home river or lake. Consequently, if a human encounters a kappa, he should perform with great ostentation a very deep, respectful bow. Not wishing to seem disrespectful, the kappa will return the bow, with equal ostentation – but as it does so the water in its head cavity will of course pour out, thereby rendering the kappa powerless until it can refill it. If, however, the human scoops up some water from the kappa’s aquatic domain and refills its cavity before it has chance to do so itself, from then on the kappa must serve the human faithfully for all eternity.
THE BAKU
My own particular favourite animal yokai (though it actually originated in Chinese folklore before becoming part of Japan’s pantheon of monsters), the baku looks quite ferocious - combining the tail of an ox and the body and paws of a tiger with the eyes of a rhinoceros and the head, trunk, and tusks of an elephant (as well as, occasionally, the wings of a dragon). Although it is sometimes referred to colloquially as a goblin elephant, this extraordinary mammalian composite is a very benevolent beast (unlike most yokai), and performs an extremely useful service to humans. For when it appears at night, it devours a person’s bad dreams, before they have chance to transform into fully-fledged nightmares. 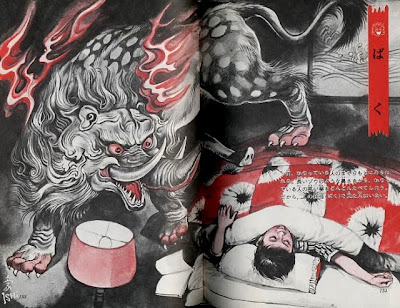 In modern times, depictions of the baku have gradually changed, so that nowadays it is no longer portrayed as a chimaera sporting features drawn from several different beasts, but instead as a recognisable tapir - one species of which, the Malayan tapir Tapirus indicus, is already a well known creature in Asia.
THE WAIRA
Another veritable chimaera among Japan’s heterogeneous array of animal yokai is the waira. This mountain-frequenting monster has the head of a ferocious dog, an ursine body the size of a cow, a pair of very large feathered eagle wings as well as impressively-clawed eagle-like feet, and a long bushy-tipped tail. 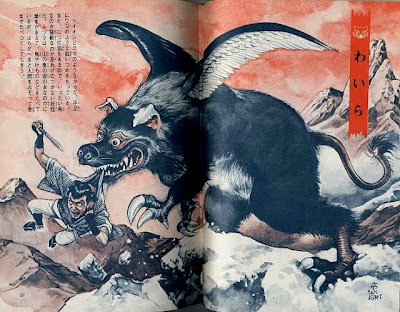 The male waira’s dense hairy pelage is usually very dark in colour, whereas the female’s is reddish. It generally uses its scythe-shaped claws to dig up rodents and other earth-dwelling creatures that it feeds upon, but will not hesitate to attack and devour any human mountaineer unfortunate enough to encounter it.
THE NEKOMATA
If a domestic cat attains a venerable age, or grows above a certain size, or its tail attains too great a length, it may transform into a nekomata. This formidable animal yokai still superficially resembles a domestic cat (albeit one the size of a leopard), but is instantly distinguished from all normal cats by its tail, which has split longitudinally into two completely separate tails, and also by its ability to walk upright on its hind legs. 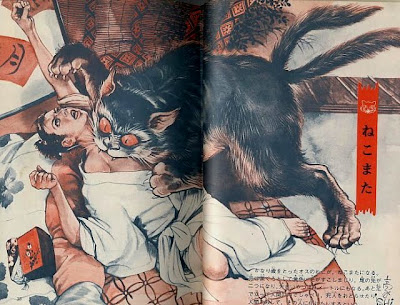 Other strange but highly undesirable talents of this feline monster include the capability to reanimate and take control of fresh human corpses merely by leaping over them, to generate fireballs inside the house in which it dwells, and even to kill its owner and then shape-shift into their likeness in order to replace them. Not surprisingly, perhaps, in earlier times many Japanese cat-owners would have their cat’s tail docked, in order to prevent it from splitting into two and their cat thereby becoming a nekomata.
THE ONMORAKI
This demonic bird with glowing eyes and the ability to spurt flames from its beak is believed to be the transformed soul of a newly-dead person, and is commonly depicted as a black crane-like entity – though as seen here, Ishihara has chosen to portray it as a hairy-headed eagle. 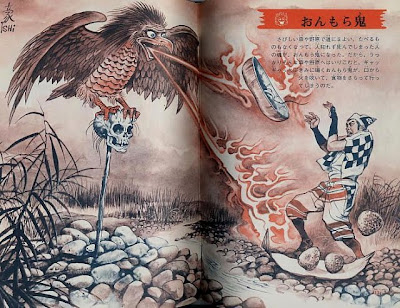 Yet despite its seemingly-malevolent form, the onmoraki is actually an upholder of religious propriety, chastising with loud shrieks of abuse anyone that it finds sleeping inside the sermon hall of a temple, or any priest who fails to read his sutras.
THE NURE-ONNA
Often encountered on a wild expanse of coastline combing her long black hair and submerged from the waist down in the sea, seen like this the nure-onna resembles a beautiful naked young woman. And placed beside her is a bundle wrapped in rags that a human observer is likely to mistake for a baby. But if the human offers to hold this ‘baby’, and the nure-onna hands it over, the human will soon discover that it is nothing more than a very large stone, which instantly becomes so heavy that the human is rooted to the spot. 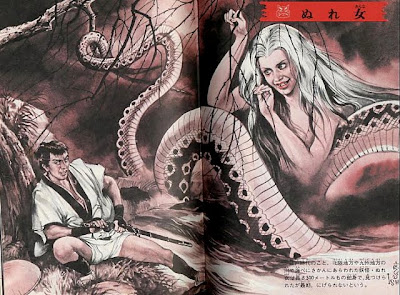 As soon as the nure-onna sees this, she rises up out of the water, revealing that in reality she is an enormous snake-woman, with her body from the waist down consisting of an almost limitless extent of scaly serpentine coils, measuring up to 1000 ft long. And as the trapped human gazes helplessly into her lidless ophidian eyes, the nure-onna opens her jaws, her long scarlet tongue flicks out, enwrapping her victim, and proceeds to suck every last drop of blood from the human’s body, until all that is left is a shrivelled, etiolated corpse.
THE JOROGUMO
Perhaps the most dangerous and evil animal yokai of any documented here is the jorogumo. This foul shape-shifting entity appears at night in the guise of a beautiful maiden, seeking to entice an unsuspecting man into some lonely, secluded location where rescue or escape is unlikely. As soon as she has trapped him there, often by hypnotising him with seductive music played by her on a type of Japanese lute known as a biwa, the jorogumo transforms into its real form – that of an enormous bloodthirsty spider. 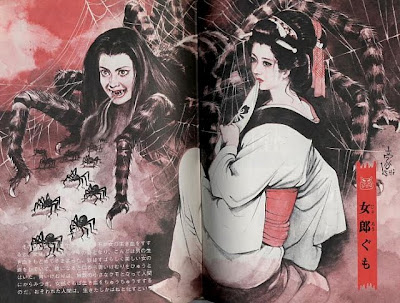 This hideous monster swiftly ensnares and enshrouds its helpless human victim with thick strands of gossamer as strong as cords of steel, before injecting his web-trussed body with potent venom, and then devouring his paralysed form while he is still alive. If, however, he is carrying a weapon, suspects quickly that the maiden luring him away is in fact a jorogumo, and can mortally wound her, she will betray her true were-spider identity by transforming into her arachnid alter-ego before dying.
Much as I am intrigued and quite fascinated by them as an adult, I am nonetheless grateful that, whereas children in Japan are seemingly brought up quite routinely on stories featuring their nation’s multifarious and quite frequently murderous assemblage of yokai, as a child in England I was reared on the decidedly less bloodthirsty exploits of Doctor Dolittle!
Posted by Dr Karl Shuker at 04:25