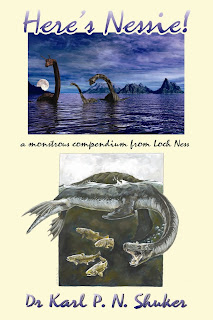 It is all thanks to my mother Mary Shuker taking me as a child to the town of Walsall in the West Midlands, England, one afternoon during the late 1960s that I first learnt of the Loch Ness monster (LNM). For it was while we were browsing together that day in Walsall's branch of the books and stationery shop W.H. Smith that Mom bought me a thoroughly amazing, captivating book entitled Stranger Than People.

Published in 1968, it was packed with lavishly-illustrated spreads documenting mysteries from the real world, the world of myths and legends, and the world of fiction (which included some wonderful, specially-written short stories). It is within the pages of this momentous, life-changing volume, one that profoundly influenced and nurtured what has become my lifelong interest in mysterious phenomena (especially of the cryptozoological and zoomythological kinds), that I first read about such diverse but fascinating subjects as the yeti, the colossus of Rhodes, Edgar Cayce and telepathy, werewolves and vampires, the kraken, giants, the minotaur, Von Kempelen's chess player, mermaids, witches and witchcraft, 'deathless' warriors, aliens, trolls, zombies, leprechauns, feral children, Herne the hunter, Moby Dick – and, of course, Nessie, the Loch Ness monster (LNM). 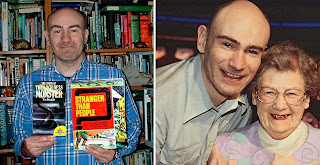 A few years later, moreover, during a visit to the Warwickshire, England, town of Stratford-upon-Avon (birthplace of William Shakespeare), Mom bought me my first LNM book, Tim Dinsdale's The Story of the Loch Ness Monster (1973). An enthralling account of this Scottish mystery beast's remarkable history, it was justifiably lauded as a Commended Title in the prestigious Times Educational Supplement Information Book Awards during that same year.

Needless to say, I was hooked - and have been in relation to this long-necked aquatic cryptid ever since – unlike Nessie, conversely, which continues to be just as evasive today as way back then, over 40 years ago now, but, equally, remains just as thought-provoking and enigmatic too. 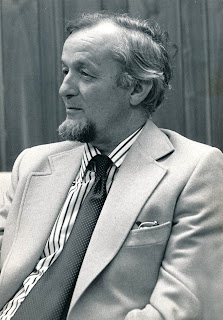 Tim Dinsdale, to whom my book is dedicated (© Prof. Henry H. Bauer)

Indeed, the LNM is not only the premier mystery beast of the United Kingdom, it also vies with the bigfoot or sasquatch as the most famous one anywhere in the world. Little wonder, therefore, that during my many years as a cryptozoological researcher and writer I should have documented it and all manner of aspects relating to it in a wide range of publications.

Now, however, for the very first time and in direct response to popular demand, the vast majority of these previously disparate Nessie-themed writings of mine have finally been brought together, and in expanded, updated form whenever possible too, to yield my newly-published LNM compendium, covering a fascinating, extremely broad spectrum of pertinent topics. 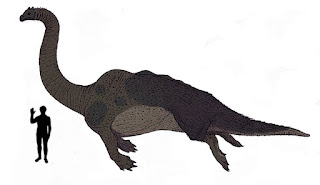 Nessie, is this really you? Artistic reconstruction of what the LNM may look like, always assuming of course that such an entity actually exists! (© Connor Lachmanec)

The first two chapters set the scene by offering a comprehensive review of the history and controversies associated with this most contentious of aquatic cryptids. The others that follow them investigate such subjects as some of the most – and least – plausible taxonomic identities that have been proposed for it; the closely-linked traditional Scottish folklore of kelpies and other water-horses; a look at various Nessie-related hoaxes; an extensive survey of less familiar water monsters reported from other Highland lochs; some reviews of Nessie-related material; a hitherto-unpublished LNM sighting given to me by none other than leading Nessie researcher and eyewitness Tim Dinsdale shortly before his untimely death (and to whom my book is dedicated); Nessie and the noble hobby of philately; a retrospective devoted to the historic LNM conference staged by the International Society of Cryptozoology at Edinburgh's Royal Museum of Scotland in 1987; the abiding paradox of the mystifying Pictish beast as intricately carved upon numerous ancient symbol stones by Scotland's early 'painted people' the Picts; my very own tribute in verse to Nessie; an annotated, YouTube-linked listing of Nessie-themed songs and music videos; and much more too!

Supplementing these diverse subjects is an equally eclectic selection of illustrations - a dedicated Nessie gallery containing a dazzling array of spectacular full-colour LNM artwork, including a number of specially-commissioned, previously-unpublished examples - plus a wide range of text images, a delightful foreword by veteran Nessie researcher Prof. Henry H. Bauer, very comprehensive bibliography of non-fiction LNM books, a listing of current Nessie-themed websites, and a detailed index. 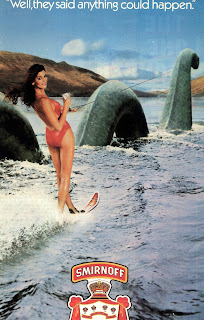 Smirnoff's famous, fondly-remembered Nessie-themed magazine advertisement from the 1980s (© Smirnoff – reproduced here on a strictly non-commercial Fair Use basis only)

So without further ado, I hope that you enjoy my latest, 24th book, welcoming you to the sometimes decidedly weird yet always totally wonderful world of Nessie - the mystifying but ever-memorable monster of Loch Ness.

My book is available here on Amazon USA, and here on Amazon UK (the 'temporarily unavailable' notice on the latter site merely relates to its need to order more stock of it), as well as directly from the publisher, CFZ Press, here. 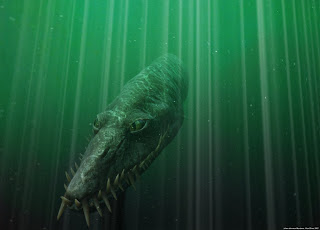