WHEN BIGFOOT CELEBRATED THANKSGIVING WITH THE PILGRIM FATHERS? A SHUKERNATURE PICTURE OF THE DAY 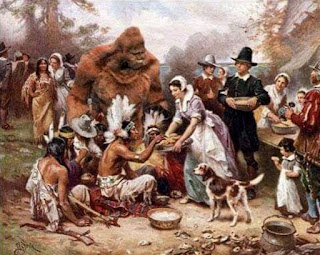 Painting of a Pilgrim Fathers Thanksgiving feast seemingly attended by a sasquatch! (Public domain image digitally photo-manipulated by person/s unknown to me)

It's been a while since I posted a ShukerNature Picture of the Day, but I recently saw online an eyecatching illustration that seemed ready-made for this purpose, so here it is, presented above.

Moreover, this nothing-if-not-memorable image has lately been reposted far and wide on social media sites and beyond, and has attracted much speculation as to whether it and the extraordinary event depicted by it might actually be real – so naturally I had to find out, and this is what I found.

As can be seen, it appears to be a painting of a very early American Thanksgiving celebration, featuring Pilgrim Father figures with their families, friends, and some visiting Native American representatives…plus one highly unexpected, additional attendee. Occupying centre stage, right at the heart of all of the activities and, judging from its expression, taking a keen, intelligent interest in everything, is a bigfoot (sasquatch), albeit one with somewhat orangutan-hued fur.

Needless to say, if this painting were genuine, dated back to some far-gone period in American history, and depicted a real incident, it would constitute an astonishing piece of evidence in support of the bigfoot's reality. However, being only too aware from my investigations of numerous previous examples of supposed visual proof for cryptid existence of how readily images can be digitally photo-manipulated using Photoshop and other such programs, I had little (if any) doubt that this was yet another such case, with the bigfoot image having been digitally added to some genuine pre-existing artwork. But to confirm my suspicions, I needed to uncover that artwork.

Happily, this task took very little time to accomplish, thanks to a successful Google Image-driven online search duly conducted by me. Consequently, I was soon gazing on my computer screen at that original, unmodified, and conspicuously bigfoot-lacking painting – and here it is: 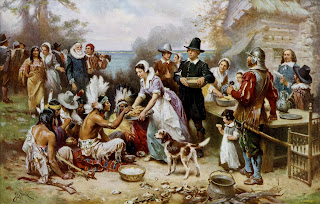 As captioned above, the painting in question is entitled 'The First Thanksgiving 1621', and had been produced sometime between c.1912 and c.1915 by Philadelphia-born American painter Jean Leon Gerome Ferris (1863-1930), who was best known for his series of 78 paintings depicting scenes from American history entitled 'The Pageant of a Nation'.

This is currently the largest series of American historical paintings produced by an artist working alone, rather than with assistants or as part of a collaborative artist group. The above painting is part of that series, and as confirmed by its title it portrays the very first Thanksgiving celebration to have taken place in North America, which occurred in 1621. This was a major three-day event that was held during the end of September or early October, and in the painting Ferris depicted the Pilgrim Fathers and their families sharing their feast with (un?)invited members from the Native American Wampanoag nation.

However, this famous artwork has attracted various criticisms concerning inaccuracies of depiction in it by Ferris relating to both the Pilgrim Father colonists and the Wampanoag figures. Apparently, the black costumes worn by the colonists in this painting are incorrect, inasmuch as back in 1621 the colonists would have been wearing brightly-coloured costumes, but without buckles, because those accoutrements did not come into fashion until much later during that century.

Equally, the Wampanoag did not wear elaborate feathered head-dresses like those that they are portrayed wearing here by Ferris, nor would they have sat on the ground, and there would have been more of them present at the feast than colonists, because they are known to have outnumbered the colonists 2:1.

Perhaps it is just as well, therefore, that the bigfoot's presence in this painting as seen in the version of it circulating online and investigated here on ShukerNature is due entirely to photo-manipulated fraudulence (and by person/s unknown) rather than in any way to Ferris – otherwise, painting purists may well have suffered a serious bout of collective, convulsive apoplexy! 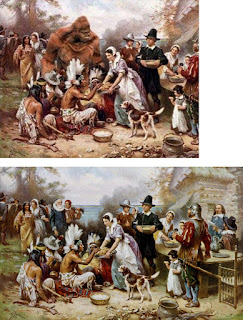