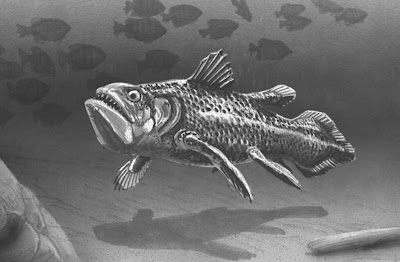 I've made this request for info before, but to no avail. However, I don't give up easily, so here we go again!
In 1996, French crypto-correspondent Michel Raynal sent me details of a remarkable Spanish goblet described to him (and also sketched) by one of his own contacts. The goblet in question is supposed to date from the 17th Century and depicts a strange fish that greatly resembles the modern-day coelacanth Latimeria chalumnae, which remained undiscovered by science until December 1938, and has never been caught off European waters - only off South Africa, Mozambique, Madagascar, and (mostly) the Comoro Islands. (A second, closely-related species was captured off Sulawesi, Indonesia, during the late 1990s.)
Does the goblet provide evidence, therefore, for an unknown Latimeria population existing in the seas around Spain, or even Mexico - if the goblet was of Mexican origin but was brought back to Spain at a later date?
Michel's correspondent stated that the mystifying goblet was on display in the Carnegie Museum of Natural History at Pittsburgh, and that, emphasising the similarity of its portrayed fish to Latimeria, a specimen of Latimeria preserved in formaldehyde was exhibited alongside the goblet, with a caption asking whether there could indeed be coelacanths in the Atlantic still undiscovered by science. Greatly intrigued by this, on 30 April I wrote to the museum to request further details concerning the goblet - its origin, previous ownership, opinions from the museum's zoologists, whether any photos of it could be made available to me - and on 9 May I received a kind but very unexpected reply from Elizabeth A. Hill, Collection Manager of the museum's Section of Vertebrate Paleontology.
According to Ms Hill, the goblet was not on display there, and she could find no information that the museum had ever possessed such an item! Moreover, its Recent (i.e. modern-day) fish collection was disposed of many years ago to another museum, which meant that it does not exhibit any fish in formaldehyde. As a further check, Hill contacted the museum's Anthropology Division, which holds a collection of glassware, just in case the goblet was here instead, but it was not - nor did its records have any listing of anything fitting its description that had arrived there on long-term loan from another museum.
Indeed, the only remotely similar item on display in the Carnegie Museum of Natural History proved to be a small blue and white Wedgwood plate with Latimeria itself in the centre - according to its label, this plate was presented to the museum by the Buten Museum of Wedgwood in Merion, Pennsylvania.
I can only assume that if the story of the goblet is genuine, Michel's correspondent was mistaken as to which museum was displaying it - which is where you, gentle readers, come in! If anyone out there has seen this goblet while visiting a museum in the U.S.A. (or anywhere else, for that matter), I would greatly welcome details. Who knows - we may even have another 'quest for the thunderbird photo' in the makings here!
Posted by Dr Karl Shuker at 02:12