THE WONDERFUL THING ABOUT TIGUARS! 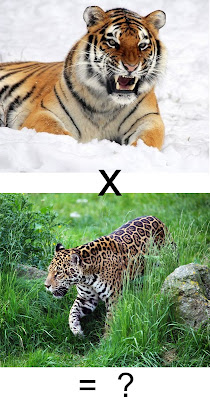 Of especial interest, however, because he is quite possibly unique, is a big cat hybrid called Mickey. Born in June 2009 at Altiplano Zoo in San Pablo Apetatlan, Mexico, Mickey is a bona fide tiguar. His father is a Siberian tiger and his mother a jaguar originating from the southern Chiapas jungle. But what does Mickey look like? Despite an extensive online search during the completion of my next book - Cats of Magic, Mythology, and Mystery, due out in autumn 2012 - I have been unable to locate a single description of him.

However, there may be at least one online colour photograph depicting Mickey. Reproduced below, this photo was kindly brought to my attention yesterday by mystery cat researcher Mark Fraser from BCIB (Big Cats In Britain) and cryptozoological enthusiast Ian C. Thomas. As can be seen here, it shows a very impressive, predominantly ginger-brown big cat, stocky in build, with an unmistakeably tigerine face, plus a white chin and mouth, but only very faint, greatly-reduced body striping. 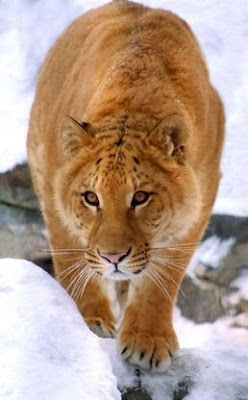 Alleged photo of Mickey the tiguar of Altiplano Zoo as an adult (credit: http://www.taringa.net/comunidades/tkaffee/945148/Felinos-Hibridos.html)

Worryingly, however, on a few other sites this same photograph is labelled not as showing a tiguar but a liger (lion x tigress hybrid) instead. Moreover, the cat is surrounded by snow, which is not what one would expect from the subtropical region of Mexico where Altiplano Zoo is located. Having said that, as pointed out to me by fellow investigator Paul Willison, meteorological records show that during the winter period this region's temperature has sometimes fallen to only a degree or so above freezing point. So perhaps the presence of snow here is not so implausible after all.

In addition, I have discovered what I feel sure is a fleeting glimpse of Mickey as a 2-month-old cub in a video shot at Altiplano Zoo and uploaded by someone with the user name mvzxim onto YouTube on 9 August 2009. View it at:
http://www.youtube.com/watch?v=jyv8HtA1w6M&feature=related 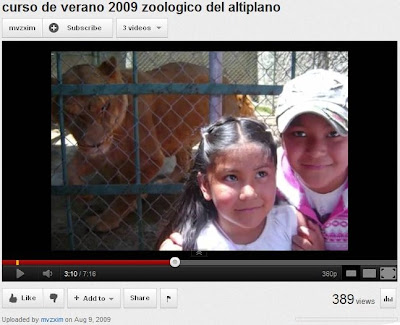 A still from the above video of Altiplano Zoo showing a mysterious cub that may well be Mickey the tiguar (video credit: mvzxim)

Certainly, whereas not resembling that of any familiar big cat, such as a lion, tiger, leopard, or jaguar, the cub (visible in the section of the video spanning 3.10 minutes to 3.14 minutes, and captured here in this still photograph) very closely resembles the above-noted alleged photo of the adult Mickey, complete with ginger fur, faint body striping, and white chin/mouth. Furthermore, unlike the photograph, there is no question that this video was indeed shot in Altiplano Zoo.

I am continuing to investigate the mysterious Mickey, in the hope of obtaining a verified photo of him as an adult plus any additional information concerning him that may be available, so any assistance would be greatly appreciated.
Posted by Dr Karl Shuker at 00:26