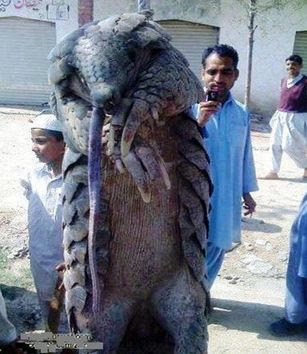 The gorgakh - a depiction of deception (photo owner unknown to me)

I've always had an especial interest in lesser-known mystery beasts, and a couple of my favourites hail from Indonesia.

One of these, which, sadly, I did not learn about in time to include within my book Mystery Cats of the World (Robert Hale: London, 1989) is a very peculiar cat said to inhabit the Lesser Sunda islands of Alor and Solor. According to orang pendek investigator Debbie Martyr, who wrote to me concerning this cryptid, it is only the size of an ordinary domestic cat, but is instantly distinguished from all felids, domestic or otherwise, by the pair of noticeable knob-like structures projecting from its brow, which resemble short stubby horns!

Another member of the Lesser Sundas island group is Rintja, which is reputedly home to a scaly mystery beast known as the veo. It is described by the island's native hunters and other eyewitnesses as measuring at least 10 ft long, with an armour of large overlapping scales covering much of its body, but with hair on its head, throat, belly, inner limbs, and tail tip. Its head is long, its feet are armed with very large claws, and if threatened it will rear up onto its haunches and slash out with the razor-sharp claws on its forepaws. The veo apparently spends its days up in the mountains, but comes down to the coast at night, where it feeds upon termites and ants, as well as any small animals left stranded on the beach by the outgoing tide. Except for its massive size, the veo's description very closely corresponds with that of the pangolins or scaly anteaters, some species of which do inhabit Asia, though none attains its size. However, during the Pleistocene epoch, ending 10,000 years ago, a giant species of pangolin, Manis palaeojavanicus, existed on Java and Borneo. Is it possible, therefore, that it, or a related species, lingers undiscovered by science on Rintja?

Today, I encountered a rash of online reports concerning a mysterious creature called a gorgakh that had lately been killed by villagers in Swabi, Pakistan, and was said to dig up newly-buried humans from their graves and devour them. It included the following striking photograph of the creature's carcase held upright for the camera:

The gorgakh photograph (photo's owner is unknown to me)

This picture has also been posted on YouTube (click here). As can readily be seen, however, the gorgakh is merely a dead pangolin, and as suggested in some of the reports, it appears far bigger than it actually is due to the fact that it is positioned much closer to the camera than are the various people featured in this same photograph - a classic case of forced perspective. Moreover, because pangolins are exclusively insectivorous, lack teeth, and are incapable even of chewing, we can swiftly discount the lurid claims about its corpse-consuming proclivities too. Exit the gorgakh as a valid cryptid.

One final point that needs to be made, however, is that despite some online reports inferring that pangolins are restricted to Africa, they do occur in Asia too, and one species, the Indian pangolin Manis crassicaudata, is native to parts of Pakistan. Consequently, there is no mystery as to this deceased specimen's procurement here either. 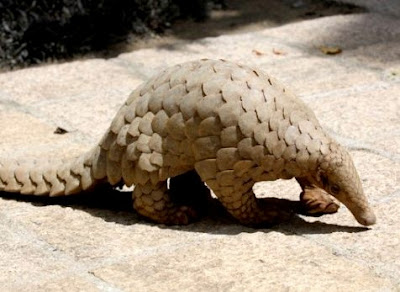