CHRISTOPHER COLUMBUS AND THE SKINNED 'SERPENT' 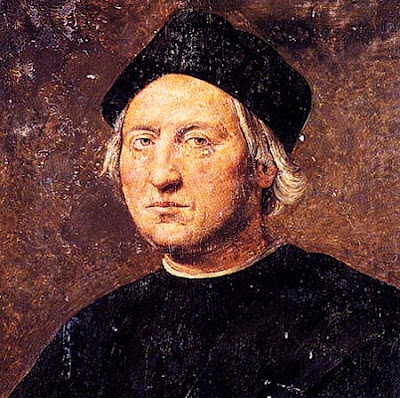 What's in a name? Not a lot, it would seem, at least as far as cryptozoological reports are concerned. Take, for instance, the intriguing yet lately-forgotten controversy surrounding the mysterious 'serpent' killed by Christopher Columbus during his first voyage to the New World.

In his diary entry for 21 October 1492, Columbus reported killing and skinning a 'serpent' measuring almost 5 ft long that he had seen entering a lake on the Bahamian island which he later dubbed Isabela. Another of these 'serpents', of similar size, was killed at a different lake on that same island a day later, this time by Martin Alonso Pinzon - the captain of one of Columbus's ships, the Pinta.

Regrettably, the skin of Columbus's serpent does not appear to have been preserved, which is a great pity, bearing in mind that zoologists have never been able to identify its species. Indeed, for a long time the prevailing opinion was that the creature was not a snake at all, but was instead a giant iguana. Unfortunately, however, as pointed out by Florida State Museum's assistant curator, Bill Keegan, in a fascinating Schenectady Gazette report (12 October 1987) concerning this cryptozoological conundrum, the iguana identity is far from satisfactory.

Iguanas do not tend to enter lakes as a rule, and there was no fossil evidence for the erstwhile existence of such creatures on this island. Also, in his diary Columbus used the word 'lagartos' when referring to lizards, and 'culebra' for a snake, whereas he called the type of beast that he and Pinzon killed a 'sierpe' or serpent.

In bygone days, the word 'serpent' had a much broader meaning than its more limited present-day usage as an alternative name for a snake. Indeed, it was often utilised as a general term for anything large and reptilian - including big snakes, lizards...and crocodiles. However, the reason why a crocodile had never been offered as a candidate for the identity of Columbus's 'serpent' was that no physical evidence existed to suggest such animals had ever inhabited the Bahamas - until 1987, that is.

When Keegan led an archaeological expedition that year to Isabela, they examined the ruins of a village believed to have been visited by Columbus - and there they unearthed the left femur (thigh bone) of a crocodile. The bone was 3.5 in long, indicating that the entire crocodile had measured around 4 ft long. So despite the fact that there are no crocodiles here today, it would seem that in Columbus's time these reptiles did indeed exist on Isabela - and that one such creature had suffered a grim fate at the hands of this now-famous explorer.
Posted by Dr Karl Shuker at 21:07