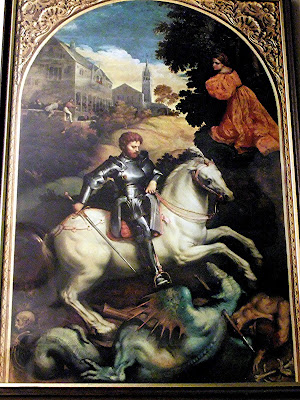 St George and the Dragon, painted as a wyvern-like creature by Paris Bordon (Dr Karl Shuker)


Today, 23 April, is St George's Day. So here, by way of celebration, is the never-before-seen unedited version of my retelling of the famous legend of St George and the Dragon that appeared in my book Dragons: A Natural History (1995). Interestingly, as seen from the illustrations included here, down through the ages artists have visualised St George's reptilian foe in an unparalleled diversity of shapes, sizes, colours, and forms – everything, in fact, from a serpent dragon and lindorm to a wyvern and both wingless and winged classical dragons. Verily, a polymorphic dragon forsooth! 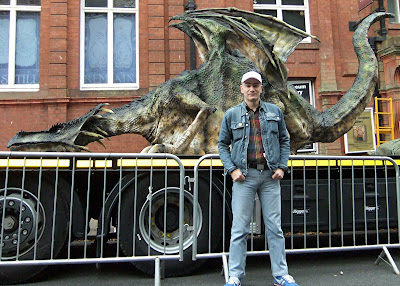 
ST GEORGE AND THE DRAGON OF SILENE

It was the dawn of the 3rd Century AD - and now it was also the dawn of the doom-laden day that the king of Silene, in Libya, had long been awaiting with icy dread. For today, his beloved, only daughter would be sacrificed to the marsh-dwelling monster that had been terrorising his land for what seemed like an eternity of hope-enveloping horror. 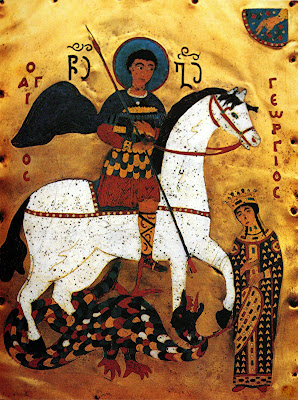 He could still recall with painful clarity this baleful beast's first appearance - a huge winged dragon with long, spiralling tail and olive-green, crocodilian scales, venturing forth from Silene's vast, unpenetrated swamplands many months ago, and choking the countryside with stifling, stench-laden clouds of poisonous vapour that blighted everything it embraced. 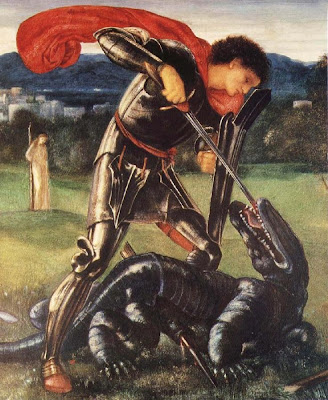 In an attempt to quell its venomous violation of Silene, the local farmers had fed the monster with two sheep each day - a strategy that succeeded until the day came when there were no more sheep, whereupon the reptilian tyrant recommenced its own strategy, of devastation by asphyxiation. That was when, with heavy heart and mortified soul, the king had finally agreed to the daily sacrifice of a child, in the hope of assuaging the dragon's wrath long enough for some miracle to deliver Silene from this animate abomination. 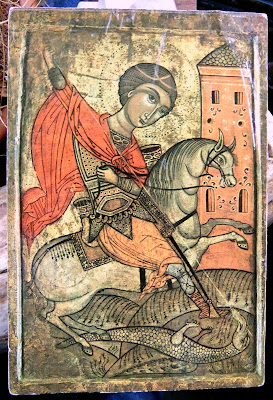 A rare beast indeed – this early depiction of St George and the dragon by an artist unknown (at least to me!) depicts the dragon as a winged lindorm!

The days, and the weeks, had fled by, and no miracle had appeared - until at last, the morning had come when it was now the turn of the king's own daughter, the fair princess Alcyone, to be tied to a stark wooden stake at the swamp's perimeter and surrendered to the loathsome creature concealed within it. No-one suspected that the miracle for which the king and everyone else in Silene had prayed so earnestly and for so long was about to occur. 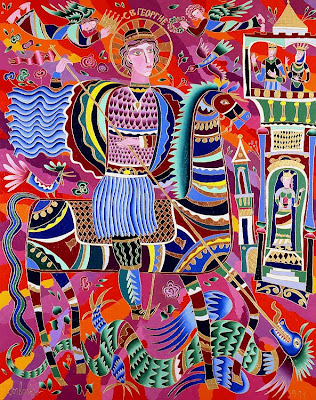 Bound upright to the stake, the princess had been standing there for only a few moments when her face grew ashen with fear, for she had heard the sounds of thunderous footsteps approaching ever nearer - assuredly the herald of her impending doom. Suddenly, however, she realised that the sounds were emanating not from the swamp ahead, but from the plains directly behind her, so she craned her neck back to discover what, or who, was responsible - and saw a tall knight, ensheathed in silver-grey armour with a breast-plate of white, upon which was emblazoned a scarlet cross. He had just dismounted from a cream-coated charger, and was carrying a long lance and a white shield, adorned once again with a cross of scarlet, as he walked briskly towards the tethered maiden. 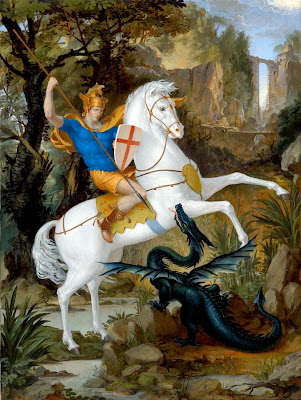 Leonard Porter's beautiful portrayal of the popular, romanticised image of St George and the dragon, with the latter as a small but archetypal winged classical dragon

It did not require much explanation from the princess to acquaint the knight fully with the situation - and he in turn wasted little time in lengthy accounts concerning himself. His name was George, he had grown up in Cappadocia, eastern Turkey, and had been a soldier in the Roman army before becoming converted to Christianity. Now he served under no-one but God, spreading the Lord's word wherever he journeyed. 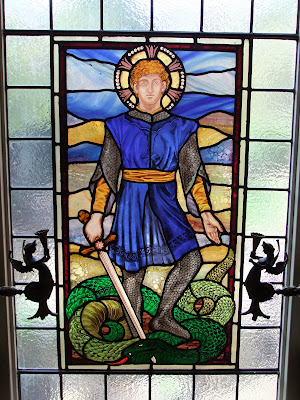 A corporeal manifestation of evil, the dragon embodied everything that George had pledged to confront and conquer - and so, heedless of her pleas to save himself while there was still time, George untied the princess and stood in her stead, valiantly prepared for battle with her monstrous foe. He did not have to wait long. Without warning, the dense reed beds fronting a steaming quagmire close by were thrust apart, as a great reptilian head borne upon a powerful neck forced its way through them, followed by a massive body supported on four muscular limbs, and a lithe tail twisting furiously like a living corkscrew.

During his travels through many strange lands, George had seen all manner of vile, misbegotten apparitions, but nothing prepared him for the wave of nauseous revulsion that swept over him as he beheld the dragon of Silene. Dripping with bilious, stinking slime that emphasised the livid hue of its scales, the hideous creature resembled a misshapen, obscene pile of rotting meat - green with putrefaction, oozing with decay, and reeking of death. 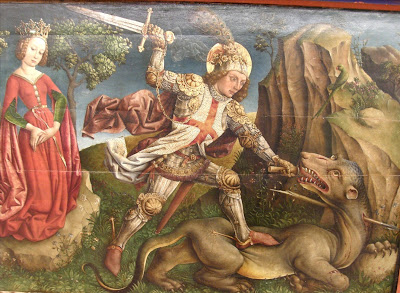 Portrayed here by Jost Haller, the dragon is disconcertingly mammalian in form - so much so, in fact, that I find myself feeling a distinct pang or two of unease when viewing its demise

Longing to avert his eyes and nose from such a sickening presence but intent upon vanquishing it from the face of the earth, George raised his right arm, and was just about to plunge his lance into the monster's head when two shapeless lumps flanking its neck's broad base suddenly burst into life - and to his bewilderment, George found himself surrounded by a flurry of blazing eyes. Everywhere he looked, they glowed and dazzled him, hypnotising him with their terrible allure - until he raised his arm again, and hurled the lance with all his might into the very heart of this spellbinding vista of unblinking, dancing orbs. 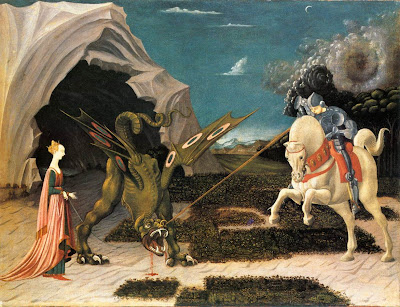 St George and the Dragon, painted as an ocellate-winged wyvern by Paolo Uccello

A terrible scream rent the air, and the eyes vanished. No longer mesmerised by their movement, the knight looked down - and there lay the dragon, still alive but mortally wounded, his great lance protruding through its upper jaw and into its throat. And over its body, like an ornate shroud, lay its immense wings - whose bright ocellated markings, resembling an array of brilliant eyes, had so effectively bewitched George's vision. 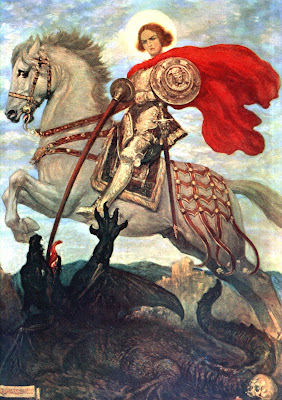 George, by George! - St George and a classical winged dragon, as painted by George Scott

Running to him in delight came the princess Alcyone, and once they had tied the girdle of her dress around the subdued dragon's neck they returned on horseback to her father's castle, leading the monster alongside George's mighty steed. There, in return for the knight's promise to slay the dragon, the overjoyed king and subjects of Silene willingly agreed to be baptized by him and thus be converted to the Christian faith. True to his word, George beheaded their onetime oppressor forthwith, and after bidding farewell to Alcyone her valorous deliverer rode away, into a future that would shortly transform him into a Christian martyr, and, many centuries later, into a certain race of medieval Crusaders' patron saint - thereafter to be known forever as St George of England. 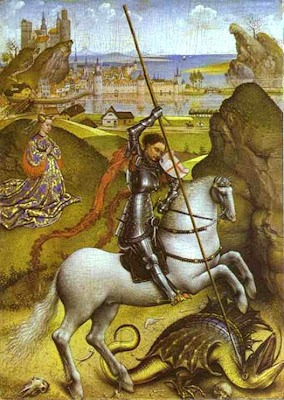 Of course, if you're wondering how I could have just stood by and allowed such a cryptozoologically-priceless specimen as a dragon be cruelly slain by St George, the answer is that I didn't - and here's the evidence! Cute little guy, isn't he? ;-) 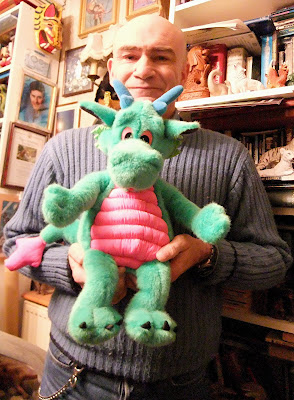