THE BLACK PUMA THAT NEVER WAS - A CASE OF MELANISTIC MISIDENTIFICATION 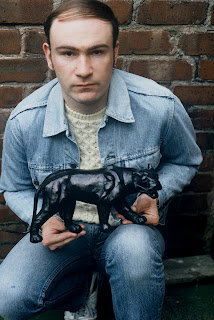 Holding a model of a black (melanistic) leopard, aka a black panther (Dr Karl Shuker)

At the beginning of February 2013, I came upon a very remarkable online photograph of a captive cat. According to the several websites that included it in their accounts, it was either a black puma or an extremely dark brown one. For all the reasons that I give here (in what is the most extensive investigation of the black puma scenario ever published, and which is also included in my book Cats of Magic, Mythology, and Mystery, 2012), however, bona fide black pumas are all but non-existent even in the wild state, and not a single confirmed specimen is known to be in captivity anywhere in the world at this present time. (Several years ago, conversely, I discovered a colour engraving from the 1800s that apparently portrayed a black puma exhibited at London Zoo during the 19th Century - again, click here for more details and sight of that engraving.)

Moreover, to my eyes this snarling/yawning cat looked far more like a black (melanistic) leopard than any puma (black or otherwise), especially in relation to the large size of its upper canines (even though they were partly obscured by the cat's upper lip).

Interested to learn more, I attempted to trace this intriguing photo's origin, and I eventually discovered that it had been snapped on 1 July 2009 by photographer Leo Druker at the Kisma Preserve in Trenton, Maine, USA, during a trip to Maine that year. He included the photo on one of the pages of his Flickr photostream site (click here for direct access to that page), and here is the photograph itself:

As can be seen from its Flickr page, this photo has been entitled 'Puma'. However, the first three tags that Mr Druker has applied to the photo are 'puma', 'panther', and 'black panther'. This immediately suggested to me an explanation for what until now had seemed an extraordinarily perplexing situation – after all, had this cat truly been a black puma, its extreme rarity would have ensured its being exceedingly famous worldwide, surely?

However, the tags suggested otherwise. In the UK and mainland Europe, the term 'black panther' (indeed, often simply 'panther' alone too, nowadays) is applied almost exclusively to the melanistic or so-called black (in reality, extremely dark brown) morph of the leopard Panthera pardus. In North America, conversely, it can also be applied to melanistic specimens of the jaguar P. onca and to putative (albeit currently unverified) melanistic specimens of the puma Puma concolor. Even the term 'panther' is in North America an alternative term for the puma (as too are 'painter', 'cougar', 'catamount', and 'mountain lion').

Could it simply be, therefore, that this cat had been labelled a 'black panther' at the Preserve, and that the photographer had been wrongly informed or had mistakenly assumed that it was therefore a black puma – when in reality it was merely a black leopard?

I posted enquiries concerning the photo on Facebook, and received many suggestions from a number of FB friends, some of whom even attempted to contact the Preserve directly via phone using the phone number on its website, but the number was not currently in use, and there is no email contact address either. Its website's information does include mention of normal pumas maintained there, but nothing whatsoever about any black or dark puma, which, as already noted, would certainly be expected if so rare and exotic a felid as that were truly present there.

I also emailed Mr Druker via his Flickr photostream site, on 2 February 2013, requesting more information concerning the photograph and the cat that it depicts, but I have not received any reply to date.*

And then I noticed that on its Flickr page, Leo Druker's photo of the melanistic mystery cat was visible to view at several different magnifications, including 3079 x 2045, the largest of all, and which was far larger than the 640 x 425 version that I'd previously been viewing. So I switched to this largest size (click here), and immediately noticed at its much-increased magnification that the left side of the cat's face (as seen in the photograph) bore a number of cryptic rosettes. No puma, not even a spotted cub, has facial rosettes. And nor does any jaguarundi. But a black leopard does! (So too does a black jaguar, but the photographed cat's face does not seem sufficiently burly to be a jaguar.)

The photographed cat seen at highest magnification, revealing its facial rosettes - click photo to enlarge it and see them (© Leo Druker)

There could no longer be any doubt. The black/dark puma in the photograph was a puma no longer, but merely a black leopard – the unsuspecting victim of a melanistic misidentification caused by an ambiguous term, 'black panther'.

NB – The photograph of the erstwhile melanistic mystery cat snapped by Leo Druker is included here on a strictly fair usage basis, for review purposes only, not for any commercial gain whatsoever; and it is copyrighted to Mr Druker.

My thanks to Loren Coleman, Raven Meindel, BCIB, and all of the many other Facebook friends who so kindly volunteered information, opinions, and assistance in relation to my investigation of this photograph.

Today I received the following interesting and informative email from Leo Druker:

"Dr. Shuker,
Sorry it's taken me a while to respond - I very rarely check my mails here on Flickr.
I'm almost positive that this was, as you inferred, a black leopard. I have no reason to think that the Kisma Preserve would have a black puma, especially one that is as rare as you have said, without the world at large knowing all about it.
Hope this helps!
Cheers,
Leo"

This noteworthy email from the photo's own photographer - many thanks indeed, Leo, for kindly responding to my enquiry - is surely enough for the case of the black puma that never was to be firmly put to rest for good.


For more information regarding black pumas, check out my latest book, Cats of Magic, Mythology, and Mystery (CFZ Press: Bideford, 2012).