THE DRAGONS OF OCEANIA

Dragons belonging to the wingless but quadrupedal classical category are most closely associated with Europe, but some have been reported far away from that continent. Among the most fascinating yet least-known of these remotely-located classical dragons were those of Oceania.

Australia was home to several very different forms. One of them was a freshwater version known as the kurreah, which inhabited Boobera Lagoon's deep lakes and underground springs in New South Wales. Thanks to its crocodilian jaws, it was sometimes assumed by Westerners to be nothing more than a real crocodile, but was much more than that. Not only was its body very elongate and snake-like, its extremely lengthy, slender tail was prehensile, able to grip anything that it wrapped its tip around. Its feet were broadly webbed, it sometimes sported exotic frills around its neck, was of colossal size, covered in thick scales, and occurred in several different colours, including green and orange. If a kurreah spied anyone swimming in its abode, it would not hesitate to seize the hapless human in its huge jaws and haul him underwater, to drown and then devour him. 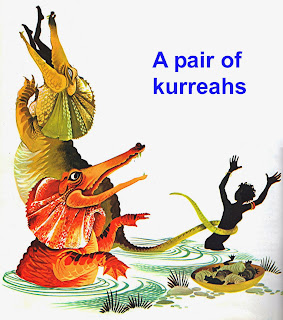 Even more ferocious than the kurreah, however, was the burrunjor, a huge wingless dragon named after a remote expanse of Arnhem Land in northern Australia called Burrunjor where it allegedly roamed – and still does today, at least according to local aboriginal testimony. Whereas most classical dragons were quadrupeds, the burrunjor was bipedal, striding purposefully along upon its hind limbs like a carnivorous theropod dinosaur from prehistory, and aboriginal cave art portraying a creature fitting this description still exists in the Burrunjor region. Similar monsters also exist in the folklore of several tribes inhabiting Papua New Guinea. 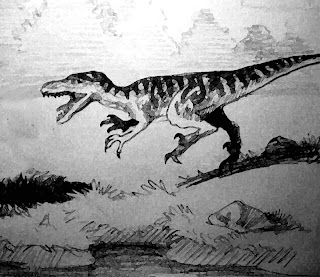 Another bipedal dragon Down Under was the gauarge or gowargay. Resembling a featherless emu, this pitiless monster frequented water holes. If anyone were foolish enough to bathe in a gauarge's water hole, it would whip it up into a mighty whirlpool and drag the unfortunate bather down into its swirling depths to drown him. 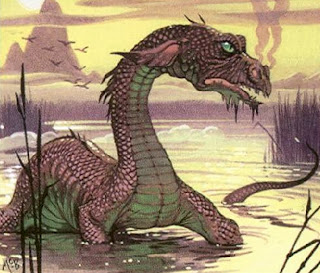 The most famous freshwater dragon in Australia, however, was definitely the bunyip. Although modern reports of mysterious creatures reputed to be bunyips are often likened to dog-headed mammalian creatures, the traditional bunyip of aboriginal lore was a huge aquatic wingless dragon, whose fearsome presence was readily made apparent by its spine-chilling, ear-splitting bellow.

Bunyips were fiercely protective of their young, and one famous myth tells of how a whole tribe was transformed into black swans when one of their hunters abducted a young bunyip from its lake and was relentlessly pursued by its enraged mother, in whose wake the entire lake was drawn up, completely submerging the tribe's village. 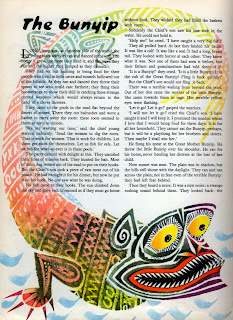 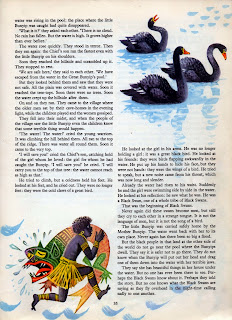 The mindi was a very specialised form of bunyip, very serpentine in body form, so was sometimes referred to as a bunyip-snake and deemed to be a rainbow dragon too. Of immense size, and possessing magical powers according to the ancient lore of the Yarra Yarra aboriginal people, it could readily poison any would-be attacker and also spread disease.

Yet another water dragon of Australia was the oorundoo, native to the Murray River. According to aboriginal legends, this enormous aquatic beast created Lakes Victoria and Albert.

New Zealand's native dragons were (or are?) the taniwha. Looking somewhat like gigantic gecko lizards or colossal tuataras (the tuatara being a unique, primitive reptile surviving only in New Zealand), but bearing a row of long sharp spines along the centre of their back, taniwha are still seriously believed in even today by the Maori people, and are said to have formidable supernatural powers.

In 2002, a major highway in New Zealand had to be rerouted because of Maori claims that it would otherwise intrude upon the abode of a taniwha. And as recently as 2012, a similar objection arose in relation to the planned $2.6 billion construction of a tunnel in Auckland, with protestors claiming that this would disturb a taniwha that lived under the city.

Auckland notwithstanding, these formidable dragons normally inhabited dark, secluded localities on land, as well as in large freshwater pools, and sometimes in the sea too, and were reputedly able to tunnel directly through the earth, often causing floods or landslides as a result. Each taniwha was allied to a specific Maori tribe that it protected as long as it received a fitting level of respect and veneration, but it would often attack and devour members of other tribes.

Also present in Maori traditions are the ngarara – giant lizard-like land dragons seemingly resembling monitor lizards (even though these are not known to be native to New Zealand). Various ngarara could assume the form of a beautiful young woman (as could some taniwha). 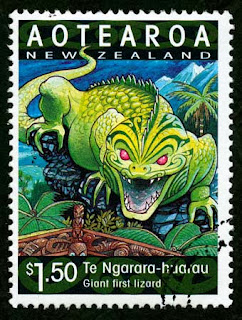 Very prevalent in traditional Hawaiian mythology is an enormous shiny-black wingless dragon of infamously mercurial temperament known as the moho or mo'o. Like certain dragons of New Zealand but otherwise unlike most dragons elsewhere in the world outside the Orient, the moho was a skilled shape-shifter, normally measuring 10-30 ft long but able to transform instantly if need be into a tiny, inconspicuous gecko-like lizard, as well as a beautiful seductive woman.

Invariably associated with water, the moho was predominantly a guardian spirit deity, protecting individuals or entire families, as well as districts, and specific localities such as fishponds – which if deep enough were frequently inhabited by these dragon deities. Although they would often remain hidden beneath the water, consuming in ecstasy the intoxicating kava root, their presence in such ponds was betrayed if there was foam upon the surface, or if fishes caught there tasted bitter.

Similar dragons were reported from other Pacific Ocean islands or island groups too, including Tahiti and Tonga. Indeed, they were actively worshipped on Tahiti by the royal Oropa'a family. And on Tonga, lizard-like or crocodile-like dragons of prodigious size and lake-dwelling propensity, reputedly sent by the gods, would seize unwary bathers or women washing items in their lakes, and promptly plunge down into the water with them, drowning their unfortunate victims beneath the surface.

This ShukerNature blog is an exclusive excerpt from my latest, newly-published book, Dragons in Zoology, Cryptozoology, and Culture (Coachwhip Publications: Greenville, 2013).