Tim Morris's excellent reconstruction of the con rit as a giant marine crustacean, based upon my proposed identity for it in my 1995 book In Search of Prehistoric Survivors (© Tim Morris)

When it debuted in his classic tome In the Wake of the Sea-Serpents (1968), Dr Bernard Heuvelmans's bold classification of sea serpents into no less than nine well-defined types was widely hailed within the cryptozoological community as a milestone in cryptid research, and it is still widely referred to today. However, the validity of certain of those sea serpent types has subsequently been challenged by various other researchers, due to revelations that cast doubt upon or totally discredit those types' proposed taxonomic identities.

Perhaps the most controversial of Heuvelmans's nine sea serpent types is his many-finned sea serpent Cetioscolopendra aeliani, for which he nominated a living species of armoured, scaly archaeocete as its identity. Unfortunately, however, long before he had even categorised his types, palaeontologists had already revealed that scales found in association with certain specimens of fossil archaeocete (a primitive group of prehistoric cetaceans) did not originate from them (as had initially been assumed following their discovery, and which had inspired Heuvelmans's identification of the many-finned as an armoured, scaly archaeocete), but belonged instead to various other creatures. In other words, there are no verified specimens of armoured archaeocete in the fossil record, thereby greatly reducing the likelihood of any modern-day species existing.

But if many-finned sea serpents truly exist, what else could they be? In my 1995 book, In Search of Prehistoric Survivors, I proposed a very different identity, one that I still consider plausible, but regarding which, sadly, certain incorrect claims have been made in various subsequent online and hard-copy sources of cryptozoological data. Consequently, I felt that it was high time to refute these erroneous claims once and for all, by revealing online precisely what I did propose regarding this sea serpent type's identity in my Prehistoric Survivors book. So here is the relevant section, quoted below in full:

Another mystery beast that has been linked to the concept of surviving eurypterids [the section of my book immediately preceding this one had presented various cryptids that had been proposed by some investigators as living eurypterids – sea scorpions] is the so-called 'sea millipede'. In 1883, the headless, putrefying carcass of a remarkable, armour-plated sea monster was found washed ashore at Hongay in Vietnam's Along Bay. It was observed by several local Annamites, including an 18-year-old youth called Tran Van Con, who actually touched the body. Thirty-eight years later, he recalled this incident to Dr A. Krempf, Director of Indochina's Oceanographic and Fisheries Service.

The carcase was 60 ft long and 3 ft wide, and was composed of numerous identical segments - so hard in texture that they rang like sheet metal when one of the locals hit them with a stick. Each segment was dark-brown dorsally, light-yellow ventrally, measured 2 ft long and 3 ft wide, and bore a pair of 2 ft 4 in lateral spines. The terminal segment bore two additional spines, directed backwards like a pair of spiny tails. The stench from the decomposing carcass was so intense that the locals soon towed it out to sea where it sank, and they referred to the creature itself as con rit - 'millipede'.

When contemplating this animal's possible identity in his book In the Wake of the Sea-Serpents (1968), Heuvelmans briefly considered and rejected the sea scorpions as a candidate, together with crustaceans - favouring instead a hypothetical, highly-specialized form of evolved armoured archaeocete, which he dubbed Cetioscolopendra aeliani ('Aelian's centipede whale'), the many-finned sea serpent. A number of sightings are on file describing elongate sea monsters seemingly bearing numerous lateral fins or projections, which the ancient writer Aelian referred to as marine centipedes. I agree entirely with Heuvelmans that the con rit is unrelated to the sea scorpions, but I also have grave doubts that it is an archaeocete.

As already noted, the concept of armoured archaeocetes is no longer in favour [I had included in an earlier section of my book the pertinent revelation that I refer to at the beginning of this ShukerNature post]; and in any case, even within his own selection of 'many-fins' Heuvelmans includes examples that simply cannot be mammalian. The most prominent of these is the 150-ft-long monster spied for about 30 minutes by a number of sailors on deck aboard HMS Narcissus on 21 May 1899, after the ship had rounded Algeria's Cape Falcon. In an interview concerning their sighting, a signal man made the following telling statement:

"The monster seemed to be propelled by an immense number of fins. You could see the fins propelling it along at about the same rate as the ship was going. The fins were on both sides, and appeared to be turning over and over. There were fins right down to the tail. Another curious thing was that it spouted up water like a whale, only the spouts were very small and came from various parts of the body."

Unless the numerous fins are in reality a pair of undulating lateral membranes extending the entire length of the creature's body - which does not seem likely from the above description - then the Narcissus sea serpent is neither a mammal nor any other form of vertebrate. Clearly, its fins were locomotory organs (creating by their propulsive movements the spouts of water noted by the signal man), not rigid spines like those reported from the carcass of the con rit. Consequently, my own feeling is that, in life, each pair of the con rit's spines had sheltered a pair of soft-bodied limbs beneath - but which, together with the remainder of this beast's soft tissues, had rotted away during decomposition, leaving behind only the hard dorsal cuticle. All of which is totally in accord with what one would expect from a crustacean: multiple locomotory limbs, hard dorsal armour that does not rot once the creature has died, and a soft body that very rapidly (and odiferously!) rots upon death.

The only major problem is the con rit's immense length - far beyond anything recorded so far by science from a known modern-day (or fossil) crustacean. It is well-known that the spiracular system of respiration utilized by insects (involving a vast internal ramification of minute breathing tubes) prevents them from attaining the gigantic proportions beloved by directors of science-fiction movies. However, crustaceans breathe via gills, and their bodies are buoyed by the surrounding water. Hence the evolution of a giant aquatic crustacean is not wholly beyond the realms of possibility and, to my mind, offers the only remotely feasible explanation to Vietnam's anomalous con rit or sea millipede.

Many years ago, in a report describing a new 3-ft-long species of Mixopterus sea scorpion, Norwegian palaeontologist Professor Johan Kiaer recalled the thrill of its discovery:

"I shall never forget the moment when the first excellently preserved specimen of the new giant eurypterid was found. My workmen had lifted up a large slab, and when they turned it over, we suddenly saw the huge animal, with its marvelously shaped feet, stretched out in natural position. There was something so lifelike about it, gleaming darkly in the stone, that we almost expected to see it slowly rise from the bed where it had rested in peace for millions of years and crawl down to the lake that glittered close below us."

No doubt cryptozoologists share a similarly dramatic dream - to haul up a living eurypterid from the depths of the oceans or even from the muddy bottom of a large freshwater lake. And somewhere out there, perhaps there really are some post-Permian, present-day sea scorpions, indolently lurking in scientific anonymity. Based upon the evidence offered up so far, however, this prospect seems no more likely than the resurrection of Kiaer's fossilized specimen from its rocky bed of Silurian sandstone.

It is perfectly clear from my above account that 'sea millipede' and 'sea centipede' are merely colloquial, non-taxonomic names for this cryptid, and that the identity for the con rit that I proposed in my Prehistoric Survivors book was a crustacean - and NOT either a marine centipede (as wrongly claimed re my book in a number of websites), or a marine millipede (as wrongly claimed re my book in some other websites, as well as in a recent book, The Cryptozoologicon, Volume 1, co-authored by Dr Darren Naish and published in 2013 – Darren has promised to include a correction in the book's planned second volume).

To my mind, the con rit is one of the most fascinating if enigmatic marine cryptids on record, but with no modern-day sightings on file (at least not to my knowledge), whether it still does – or indeed ever did – exist remains as much a mystery today as the creature itself. 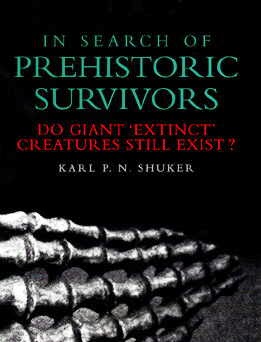