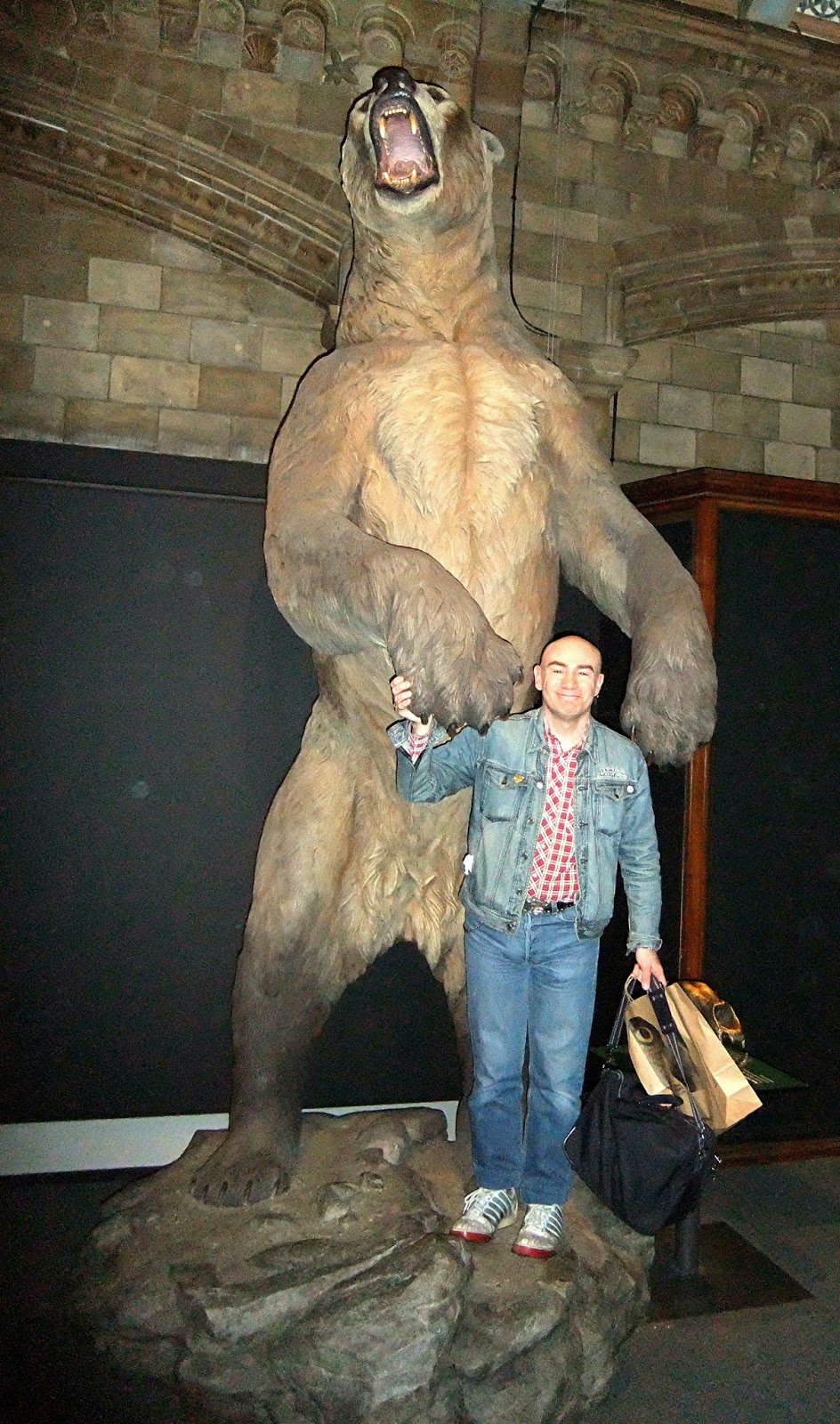 In spring 1987, amid the far northeastern Kamchatka peninsula region of what was then the Soviet Union but is now Russia, hunter Rodion Sivolobov obtained the skin of a giant white bear. To most eyes, it might simply look like the pelt of an oversized polar bear, but according to Sivolobov, and the area's local reindeer breeders, it is something very different - and very special. They believe it to be from a huge and extremely distinctive species of bear still awaiting official scientific discovery - a formidable, highly ferocious creature known as the irkuiem (aka irquiem).

For 10 years, Sivolobov had been collecting reports of this creature, much rarer and twice as big as Kamchatka's notably large brown bears, with a height at the withers of 4.5 ft and weighing as much as 1.5 tons. According to local testimony, the irkuiem has a relatively small head, short back legs, and a highly unusual running gait - throwing down its forepaws and heaving the back ones up to meet them, almost like a caterpillar! As for its luxuriant, snow-white fur, when Sivolobov succeeded in obtaining a skin of one of these bizarre-sounding 'caterpillar bears' he promptly sent samples from it, together with a photograph of the entire pelt, to a number of zoologists in Moscow and St Petersburg for their opinions. Inevitably, however, the general consensus was that dental and cranial samples would also be needed in order to attempt a conclusive identification of its species, so Sivolobov hopes to set forth and successfully procure these necessary specimens one day – but surely the very considerable advancements in DNA analyses that have taken place since then would yield some significant results now too?

In the meantime, he may have good reason for remaining optimistic that the irkuiem's eventual discovery will prove to be a major cryptozoological triumph - for according to no less august an authority than internationally-esteemed Russian zoologist Prof. Nikolai K. Vereshchagin (d. 2008), this elusive creature could prove to be a surviving representative of one of the Pleistocene's most impressive mammalian carnivores, the short-faced bear Arctodus simus. 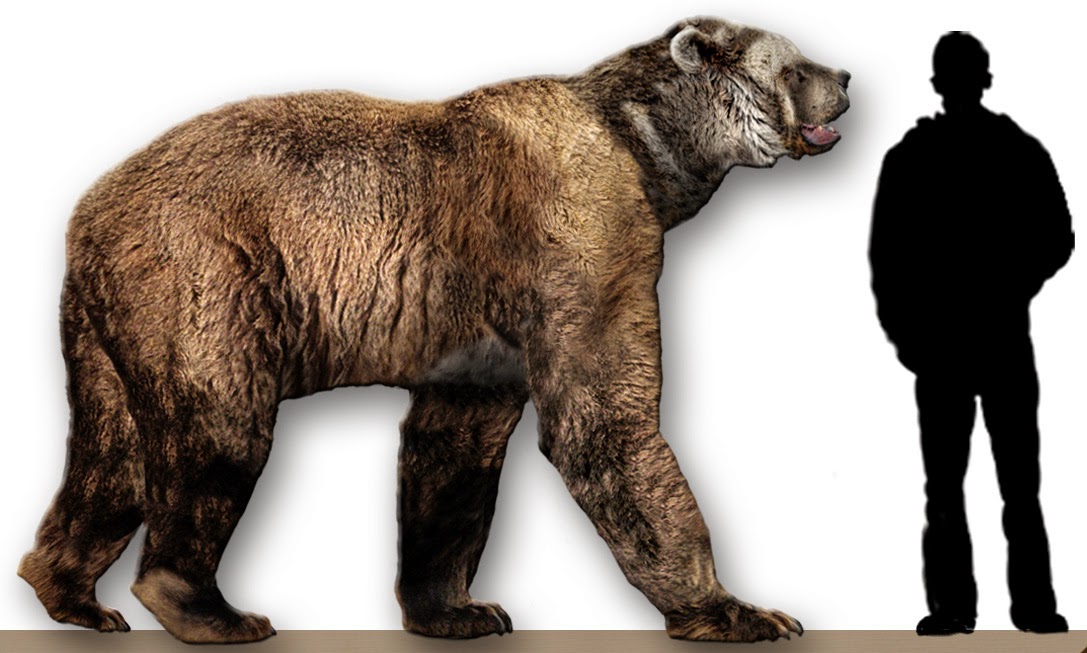 Up to 6 ft high at the shoulder, up to 12 ft tall when standing erect on its hind legs, boasting a 14-ft vertical arm reach, and weighing as much as 2 tons, this monstrously huge bear, one of the largest of all mammalian land carnivores, was distributed from Alaska down as far as California (where it was particularly common) on the North American continent. (A second, less-famous, smaller species, A. pristinus, was confined to the southern US states - especially Florida - and also Mexico.)

Also termed the bulldog bear, Arctodus was characterised not only by its squat-looking face (actually an optical illusion engendered by its short nasal regions and deep snout), but also by its relatively short body and very long legs. The result was an uncommonly gracile bear wholly unlike any species known today – so much so, in fact, that the true nature of its hunting mode remains a subject for much debate.

Its gracility argues against Arctodus being able to use sheer physical strength to overcome its prey, and yet its great bulk equally argues against it being able to use its lengthy limbs to chase after prey in a fleet-footed, flexible, cheetah-like manner. Consequently, a popular theory is that this giant bear was a kleptoparasite – i.e. using its formidable size and undoubted aggression to frighten away smaller carnivores from their kill and then steal it from them. 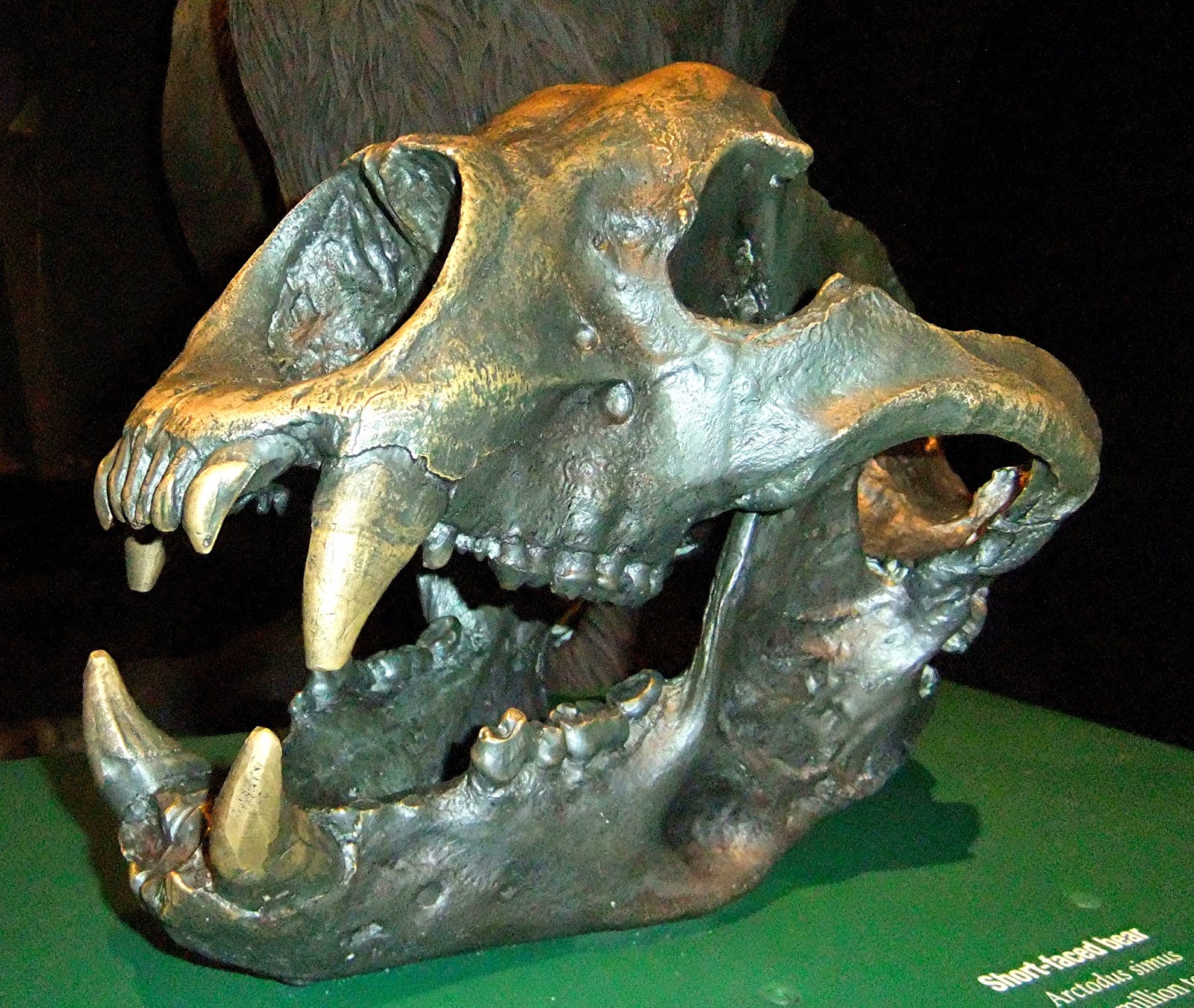 Yet regardless of which modus operandi it employed in obtaining prey, Arctodus was undoubtedly successful at doing so for some considerable time, having originated around 800,000 years ago during the mid-Pleistocene epoch and persisting throughout the remainder of this geological time period. Nevertheless, the eventual extinction of the American mammoths, mastodonts, camels, horses, and other herbivorous megafauna upon which it preyed, changing climatic conditions, and encroaching competition from the smaller but highly resourceful brown bear Ursus arctos all played a part in its own gradual demise, so that by the end of the Pleistocene, the short-faced bear had supposedly died out - but had it?

During the latter part of the Pleistocene until around 15,500 BP, Alaska was joined via the Bering land-bridge to Siberia. In 1988, Calgary University zoologist Valerius Geist suggested that the brutal belligerence of Arctodus might actually have impeded primitive man's passage from the Old World into the New World via the land-bridge. However, that self-same continental connection might also have featured prominently in this bear's own movements. Could Arctodus have migrated across it from northern North America into eastern Asia, subsequently dying out in its original New World homeland, but persisting undetected by science amid Kamchatka's remote, harsh terrain?

If so, continued evolution may even have modified its limbs, reducing their length to yield a body shape more comparable to its chief competitor, the brown bear, but retaining its greater body size as a further means of combating the brown bear's ecological rivalry - thus yielding the irkuiem described by the Kamchatkan reindeer breeders. Having said that, the 'caterpillar bear' locomotory aspect of the irkuiem remains an enigma, to say the least, but we shall see – or not, as the case may be – should supplementary information be forthcoming one say. 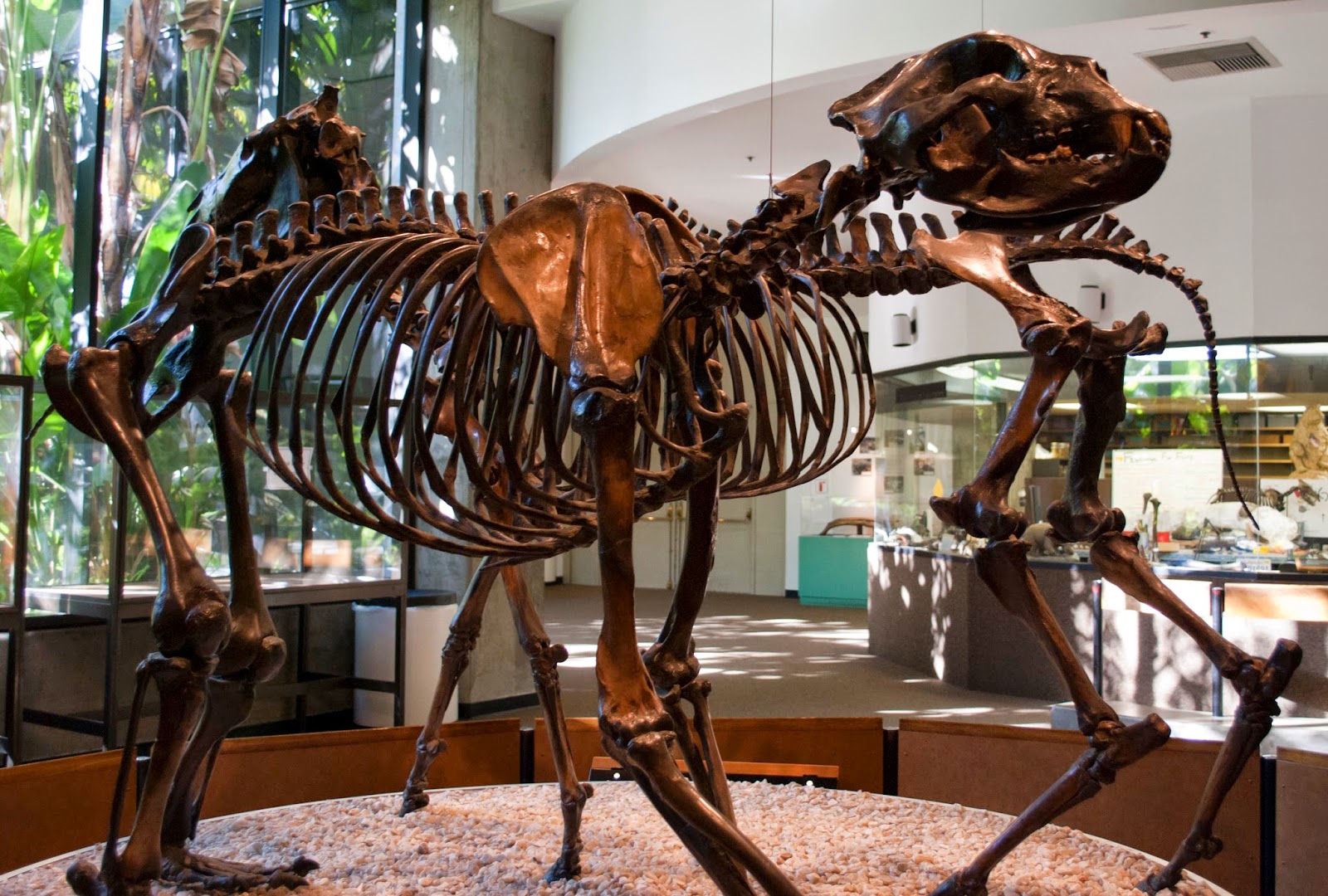 Interestingly, certain findings show that even in North America the short-faced bear survived to a more recent date than traditionally believed. In March 1992, Utah palaeontologists Drs David D. Gillette and David B. Madsen documented their excavation four years earlier at central Utah's Huntington Reservoir of a partial cranium and isolated rib belonging to a short-faced bear that dated less than 11,400 BP (Before Present day) - i.e. over a thousand years more recent than the previous record for the youngest remains of this species. Moreover, they speculate that relict populations may have persisted until 10,000 years BP, or even later - beyond the Pleistocene, into historic times.

Whereas cryptozoological sceptics condemn attempts to reconcile the irkuiem with Arctodus simus, or a modified version of it, as little more than wishful thinking, Prof. Vereshchagin remained convinced that the prospect holds promise:

"I personally do not in any way exclude the possibility that there is an eighth species of bear in the world today. The theory that it could be a close relative of an extinct Ice Age bear does not seem so far-fetched either."

Perhaps a future expedition by Sivolobov or some other intrepid investigator will vindicate the late Prof. Vereshchagin's opinion? 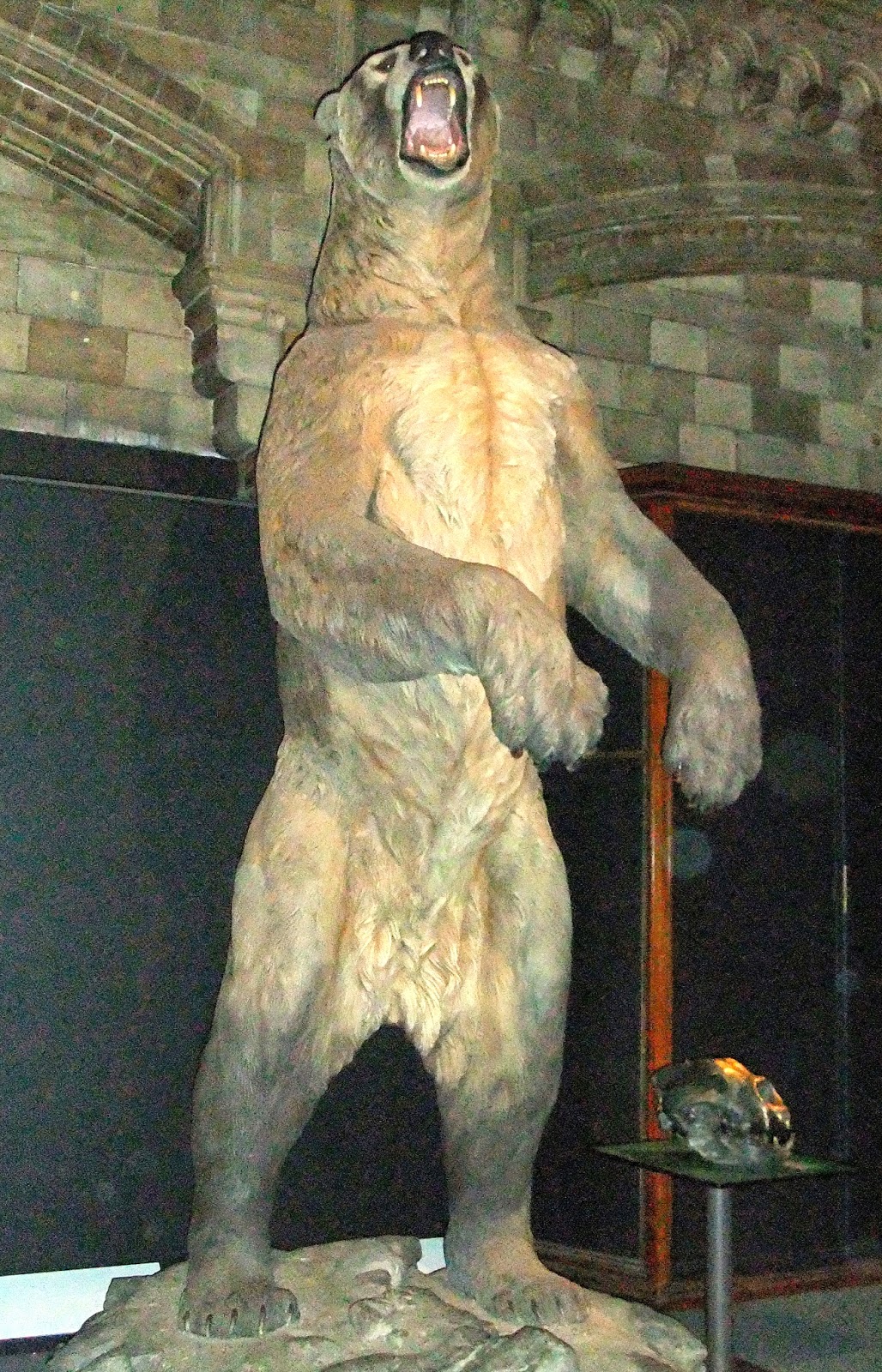 Incidentally, 'irkuiem' is not the only name that has been applied to this particular cryptid. It has been referred to as the god bear too, which is somewhat confusing, however, because this moniker has also been used in relation to a second type of huge (yet very different) ursine mystery beast of Kamchatka, one that is instantly distinguished from the irkuiem by virtue of its jet-black fur.

Long before the irkuiem became news, the forested peninsula of Kamchatka was already noted for very large bears, though these were long-haired brown bears, which in 1851 were dubbed Ursus arctos beringianus, the Kamchatka brown bear - the largest Eurasian subspecies of brown bear. Officially, the mighty Kodiak bear U. a. middendorffi of southwestern Alaska's Kodiak Archipelago, sporting an average total length of 8 ft and shoulder height of 4.33 ft in the male, is the largest subspecies of brown bear alive today anywhere. However, in 1936, Swedish scientist Dr Sten Bergman noted in a Journal of Mammalogy paper that Kamchatka may house a gigantic, short-furred, jet-black bear form that exceeds in size all other bears. 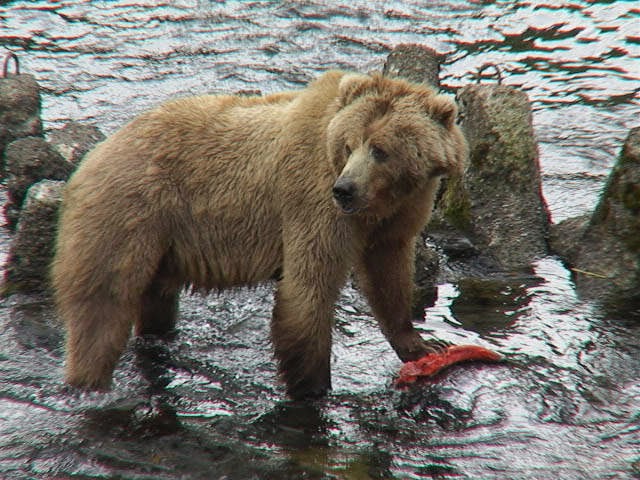 Dr Bergman had been shown the pelt of one of these mysterious out-sized beasts in autumn 1920 during a 1920-22 Swedish expedition there, and he also recorded an equally colossal skull allegedly from one such bear, plus an enormous bear paw print measuring just under 15 in long and 10 in wide. Both the skull and the paw print had been observed (and, in the case of the paw print, photographed) by fellow Swedish scientist René Malaise, during his nine-year inhabitation of Kamchatka.

The existence of such a bear form in this region has been supported to some extent by Russian sources, according to David Day, who noted in his book The Doomsday Book of Animals (1981) that weights of 2296 lb, 2227 lb, and 2311 lb have been recorded by Russian hunters from specimens here. But as the most recent records concerning such huge bears date back to the early 1920s, it must be assumed that they have since disappeared. (Incidentally, some researchers have erroneously assigned the taxonomic name U. a. piscator specifically to these ursine giants, but in reality this name had already been coined long before such creatures had become known to scientists, having originally been applied, albeit synonymously, to the Kamchatka brown bear in 1855.) Having said that, rumours persist that some specimens do still exist in certain remote Siberian localities closed off by the Soviet military during the Cold War, so who knows? Perhaps it may be premature to write off Bergman's black-furred mega-bear just yet. Nevertheless, the morphological variability of Ursus arctos is notoriously, infamously immense - inciting the description and naming at one time or another of no less than 96 different taxa of brown bear in North America alone, plus another 271 in the Old World!

All of which means that even if it does still survive, Kamchatka's giant short-furred mystery black bear is more likely to represent a mere (if spectacular) non-taxonomic variant than a discrete taxonomic form in its own right.  But until, if ever, some physical evidence can be made available for DNA analysis, its true zoological identity seems destined forever to bemuse and mystify in best cryptozoological fashion. 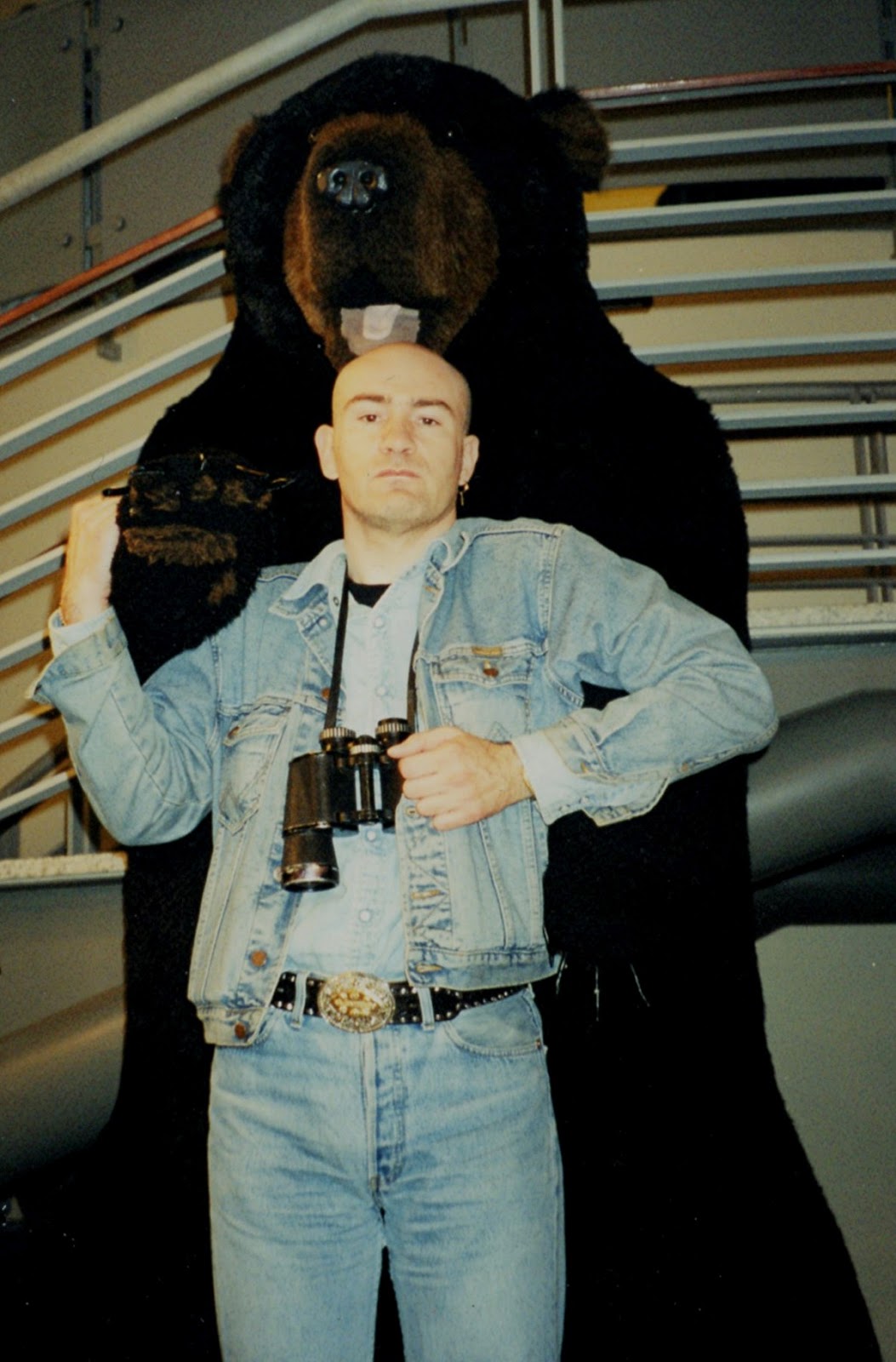 This ShukerNature article is excerpted and updated from extracts appearing in my books In Search of Prehistoric Survivors and From Flying Toads To Snakes With Wings. 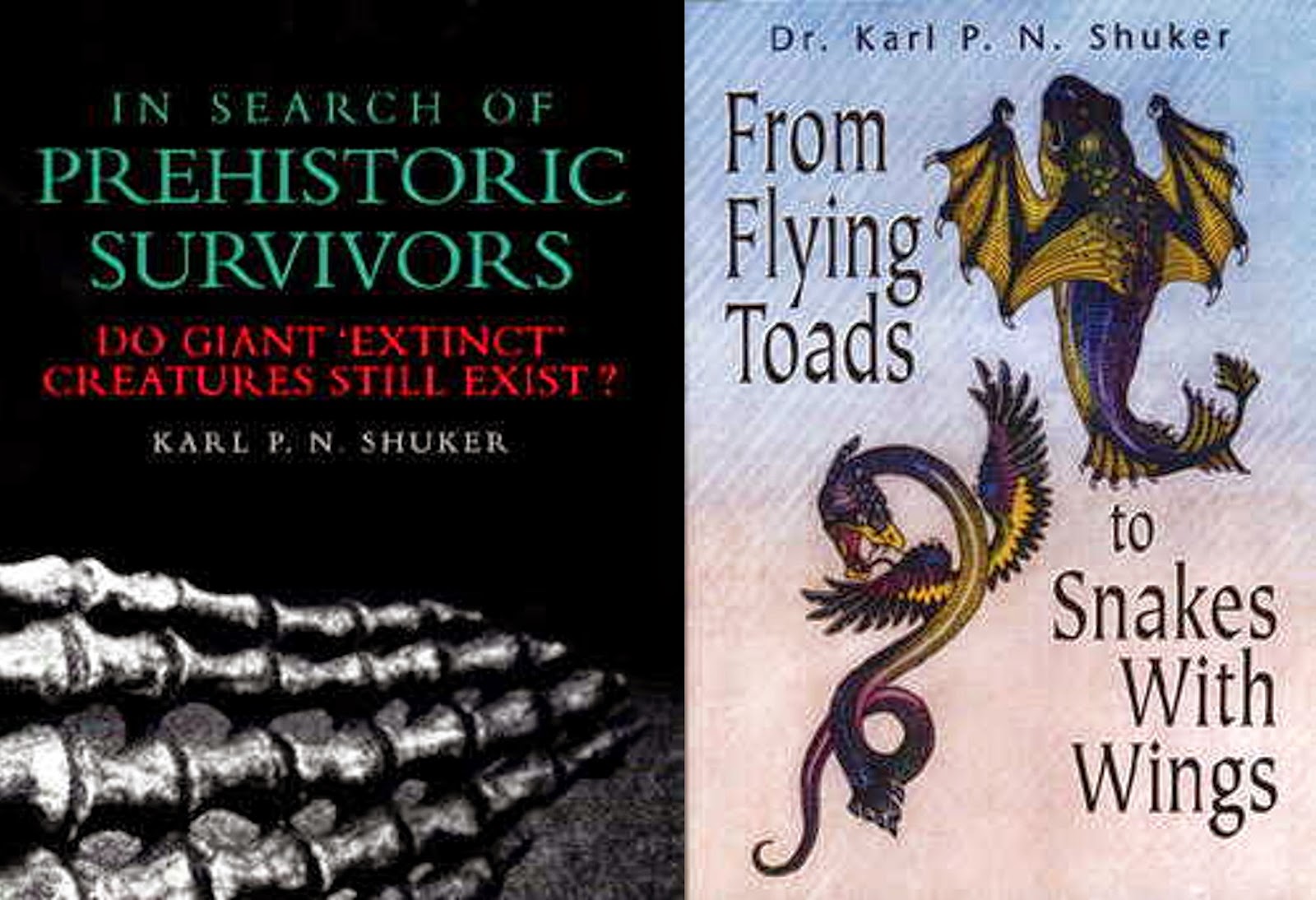