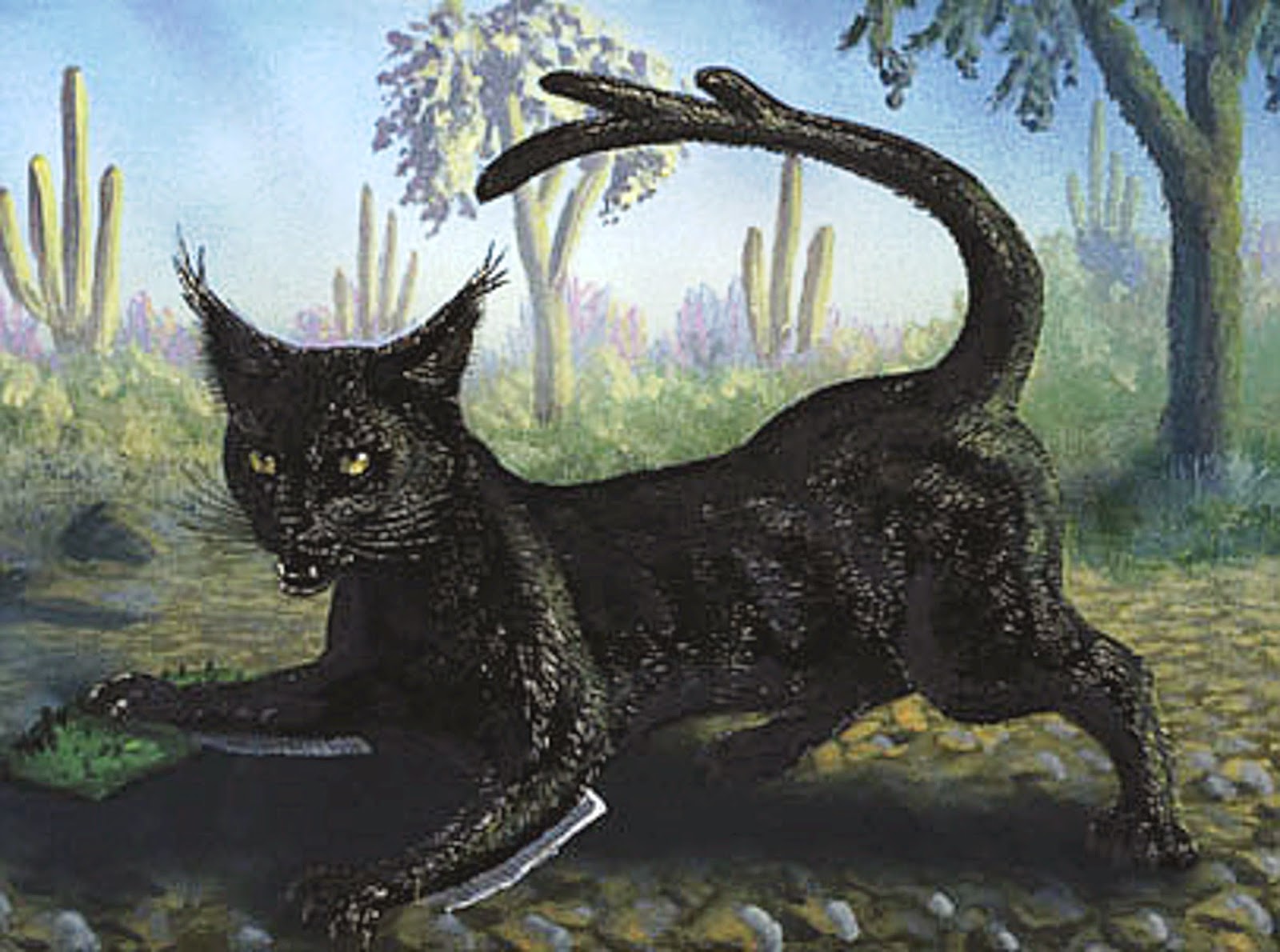 The lumberjacks, hillbillies, cowboys, and other frontier folk of the early American West created a fascinating, entirely original world of folklore, inhabited by all manner of extraordinary creatures, Collectively termed Fierce Critters, these included several overtly outrageous examples of the feline variety, as exemplified by the highly suspect but wickedly amusing trio presented here.

CAROUSING WITH THE CACTUS CAT

Surely the most memorable of all fictitious felids from the American West is the cactus cat of Arizona, New Mexico, and southern California. On first glance, it simply looks like a rather large but otherwise nondescript black domestic cat, standing about 2 ft at the shoulder and weighing around 30 lb - but look again. Then you will see that its ebony fur is strangely thorny or spiky, especially at the tips of its ears and tail, and also upon its brows. You will also observe that its long tail is branched at the end - but, most striking of all, you will perceive a thin blade of razor-sharp bone running along the edge of each of its two front legs. These blades serve a very important function.

The cactus cat earns its name from its passion for imbibing the sap of cacti, which it obtains by slashing their bases with its front legs' bony blades. Swiftly the sap begins to flow, but the cactus cat refrains from drinking this liquid until it has fermented into a potently alcoholic brew - whereupon it laps up the liquor in an unbridled fervour.

Inevitably, this demented felid becomes ever more intoxicated, until, when finally satiated, it staggers away, screeching and caterwauling uproariously in unabashed, drunken delight, very ready and only too willing to thrash unmercifully with its spiny, lashing tail anything, or anyone, approaching too closely - as many a cowboy, albeit while in a similar state of intoxication himself, has frequently testified. 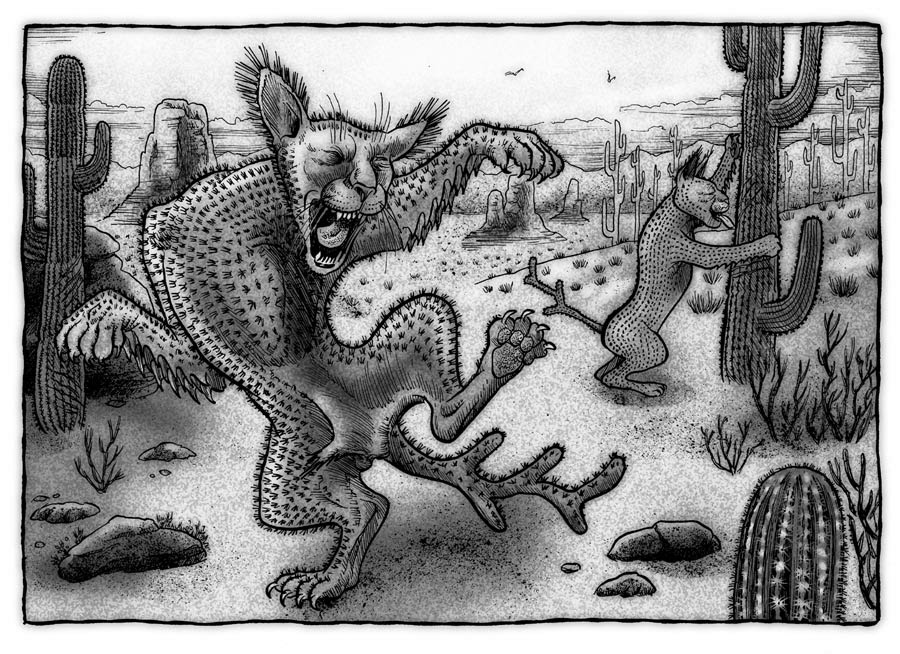 THE SPLINTER CAT – A FELINE BATTERING RAM, OR A MIAOWING RHINO!

The splinter cat must surely be evolution's answer in feline form to the rhinoceros. Feeding upon wild bees and raccoons, the splinter cat has developed a particularly violent means of flushing them out of their arboreal hideaway.

Like an animated battering ram, it charges head-first into a likely-looking tree, crashing its specially-reinforced forehead against the trunk with a thunderous collision. Not surprisingly, any raccoons or bees residing in the tree's branches flee in terror - right into the splinter cat's waiting jaws. 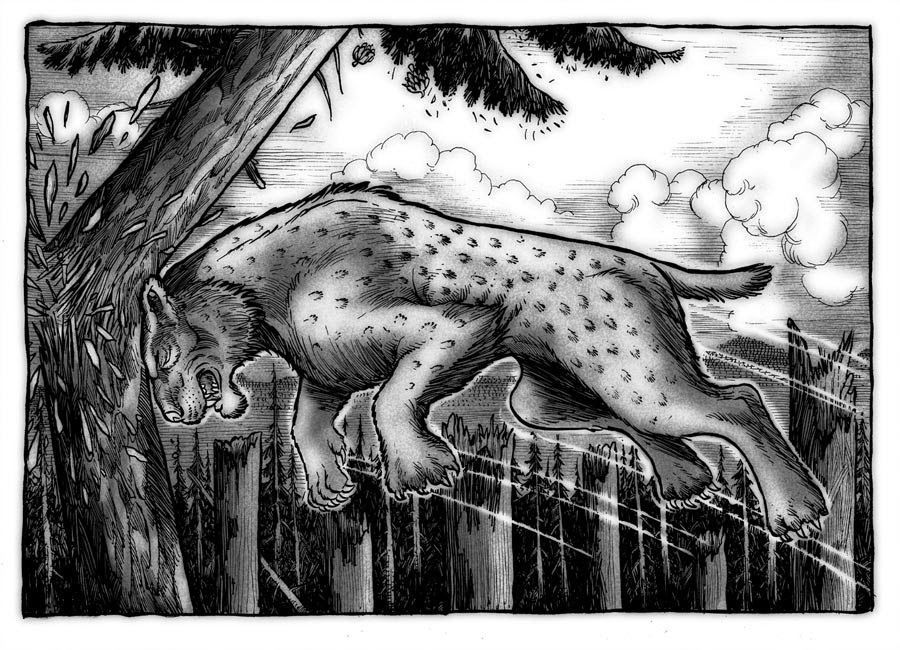 THE SMILE ON THE FACE OF THE SLIVER CAT

Rather more subtle, but no less successful, than that of the splinter cat is the ploy adopted by the sliver cat. Its prey is somewhat larger than the splinter cat's, for it is inordinately fond of lumberjacks. So much so, in fact, that it will spend many hours patiently lying in wait for one to pass by under the branch of a pine tree on which it is lying concealed.

And as soon as one does, the splinter cat smiles sweetly at him - before deftly rapping the hapless tree-feller on top of his head with the smooth side of the hard mace-like knob borne at the tip of its tail.

The other side of this mace is spiked, for good reason - because as soon as it has concussed its victim, the splinter cat uses the spiky side of its mace to hook into the lumberjack's clothing, before hauling his inert body up into the tree, for a close encounter of the fatal kind! 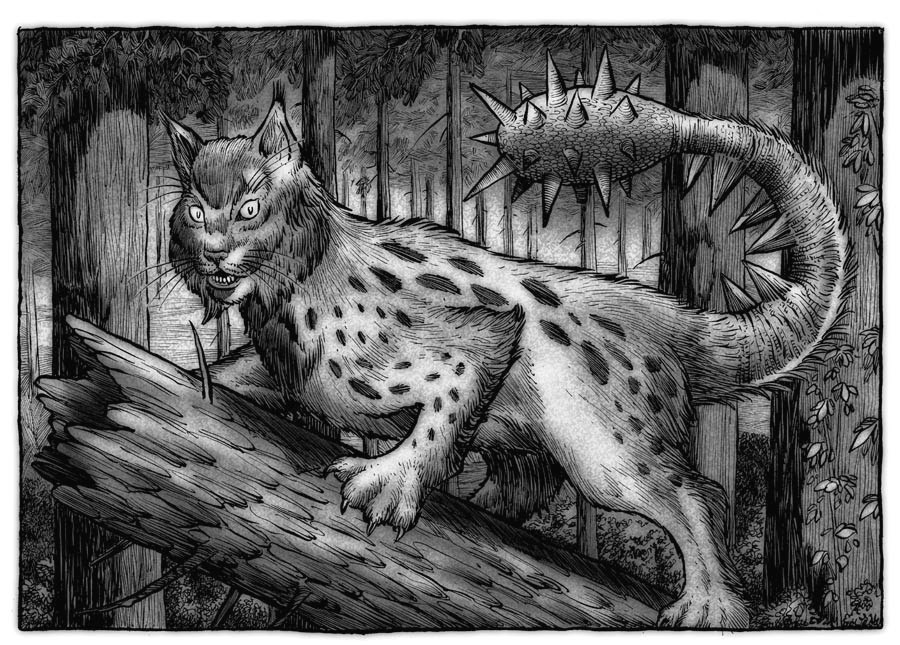 Further details concerning these and other fabulous felids from North American folklore can be found in my book Cats of Magic, Mythology, and Mystery (2012). 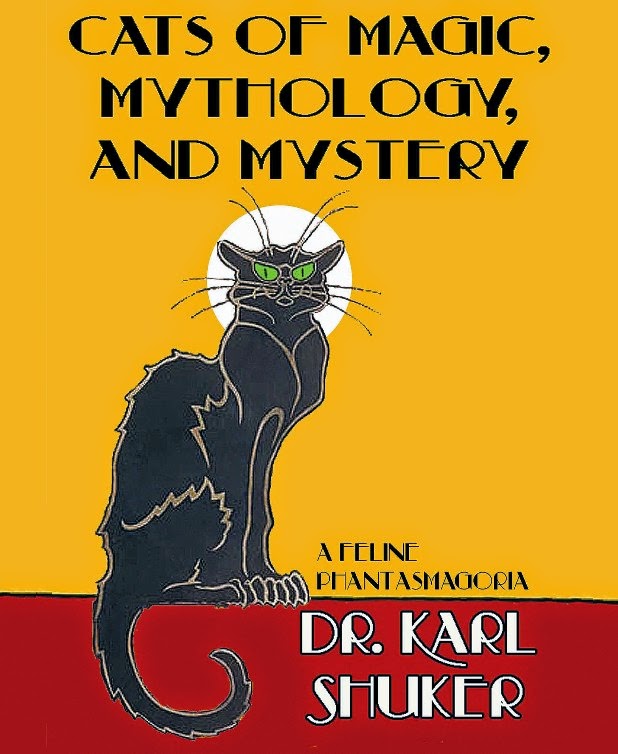