GIANT BLUE EELS OF THE GANGES - WORMING OUT A POSSIBLE EXPLANATION?

Reconstruction of the possible appearance of India's giant blue eels

The ancient chroniclers of natural history documented as factual a considerable number of extremely strange, mysterious creatures that are exceedingly implausible from a modern-day zoological standpoint.

Few of these, however, can surely be stranger, more mysterious, and certainly more implausible than the giant worm-like eels with vivid blue bodies that were soberly claimed by Ctesias, Solinus, Philostratus, Aelian, Pliny, and several other famous early scholars to dwell amid the dank riverbed ooze of the Ganges and other major rivers in India. 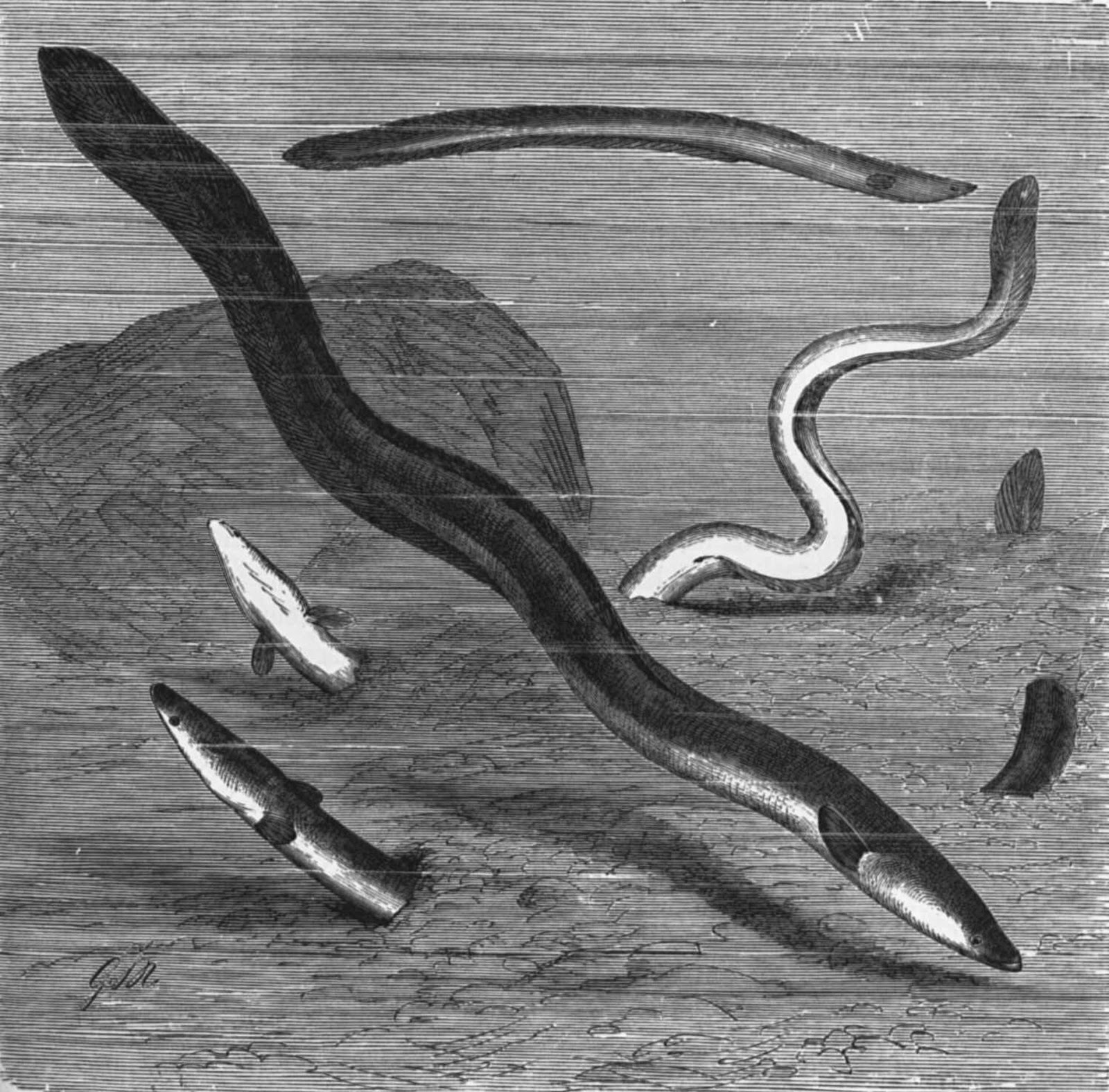 According to Gaius Iulius Solinus (a renowned Latin scholar and compiler who flourished during the 3rd Century AD), these amazing creatures were 30 ft long. However, their dimensions grew ever larger with repeated retellings by later writers, until they eventually acquired sufficient stature – up to 300 ft long now – to emerge from their muddy seclusion beneath the dark cloak of evening and prey upon oxen, camels, and even elephants!

Not surprisingly, this spectacular species of giant freshwater eel has never been brought to scientific attention. True, there are several species of very large sea-dwelling eels, including various morays, that are blue in colour. However, there are none known to science that are of comparable size and colour but which occur in rivers (interestingly, the longest moray of all, the slender giant moray Strophidon sathete, is known from the Ganges and is said to grow up to 13 ft long but is red-grey in colour, not blue). So unless the Ganges giant blue eel simply originated with sightings from Asia of sizeable blue marine eels whose correct provenance and dimensions were later documented incorrectly or confused by chroniclers in Europe, then in best angling traditions it is no doubt a classic case of "the one that got away"! 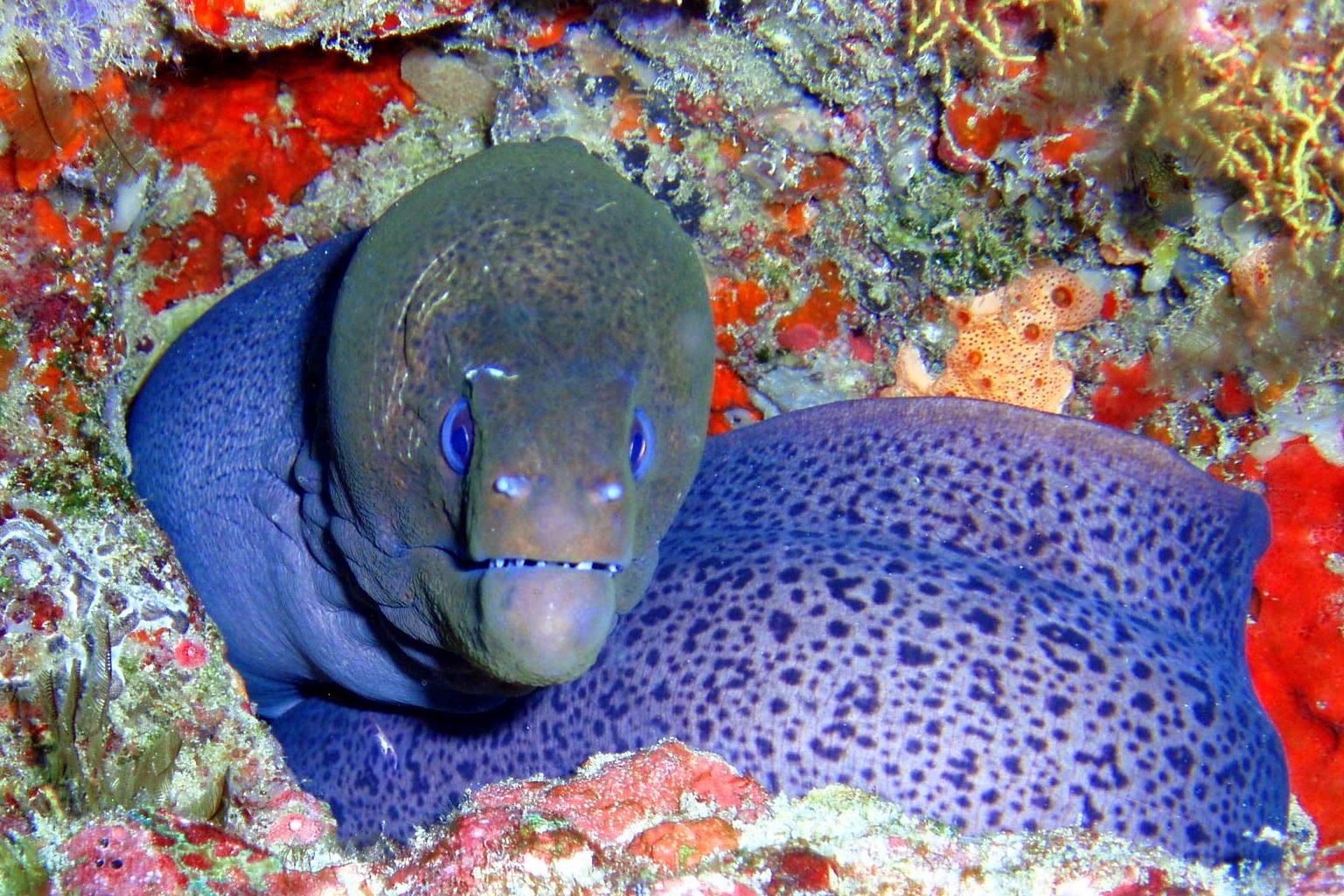 Having said that, however, in recent times I made an interesting discovery that may perhaps provide an alternative core of zoological truth from which the yarn of the giant blue, elephant-engulfing, worm-like Ganges eel was subsequently elaborated and exaggerated.

I discovered that Mount Kinabalu on the island of Borneo is home to a sizeable species of earthworm, measuring up to 28 in long when fully stretched out, which is iridescent blue in colour. Called the Kinabalu giant blue earthworm (but not confined to Borneo, as it also exists on several other nearby southeast Asian islands as well as New Guinea), it is known scientifically as Pheretima darnleiensis. 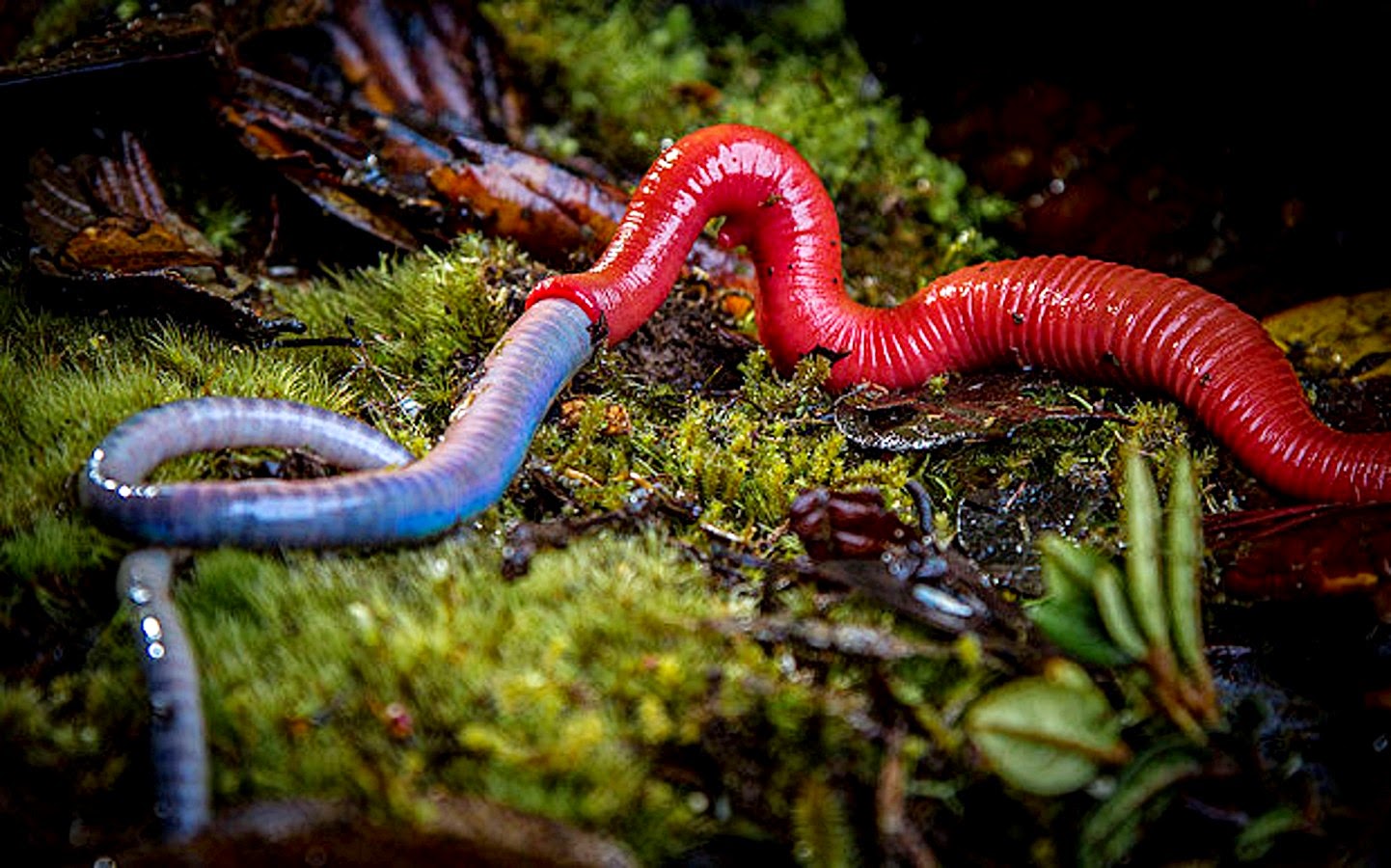 Moreover, it is such a familiar creature in this region of southern Asia that it is not beyond the realms of possibility that travellers journeying from here to India in bygone times mentioned this eyecatching worm there, and in so doing set the seeds for its transplanted mythification when chronicled in Europe.

Less likely but not impossible is that Asia once harboured a species of blue earthworm rivalling in size those famous giant species native respectively to South Africa and Australia. The largest in Australia is the Gippsland giant earthworm Megascolides australis, up to 10 ft long (occasionally more), with a blue-grey body, and to which Pheretima darnleiensis just so happens to be closely related. Moreover, Australia is also home to an extremely large species of bright Prussian-blue earthworm, Terriswalkeris terraereginae, which can grow up to 6.5 ft long, is native to the far north of Queensland, and secretes luminescent mucus. Consequently, sizeable blue earthworms existing in Australasia is by no means unprecedented. 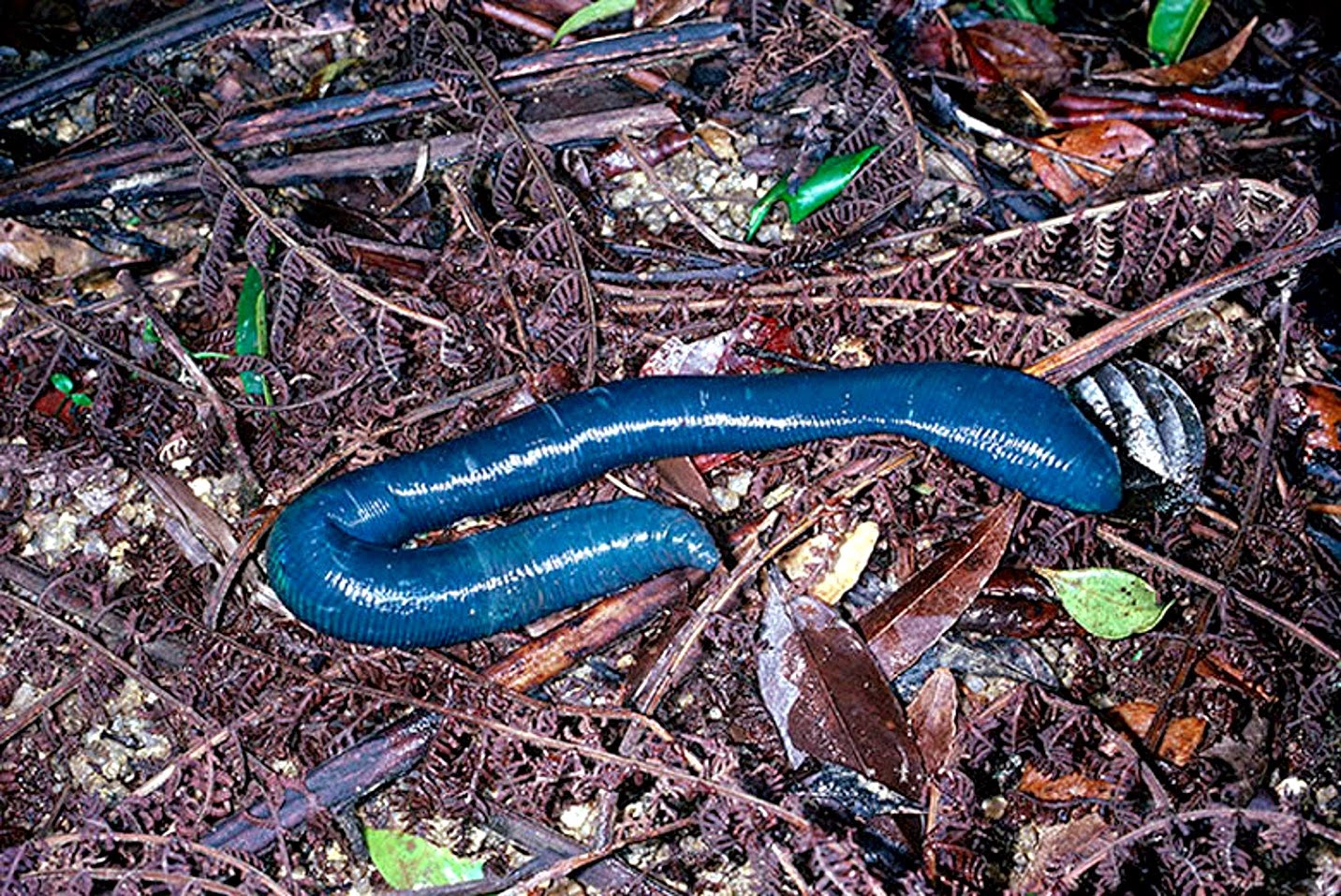 If recollections of a giant blue Asian earthworm or even the smaller Pheretima darnleiensis by travellers returning home in Europe became ever more embroidered and distorted with the passing of time, the result might well be a non-existent monster that was not so much a worm-like eel as just a worm, albeit one of unusual, memorable colouration and whose dimensions had become outrageously exaggerated down the generations of retellings. 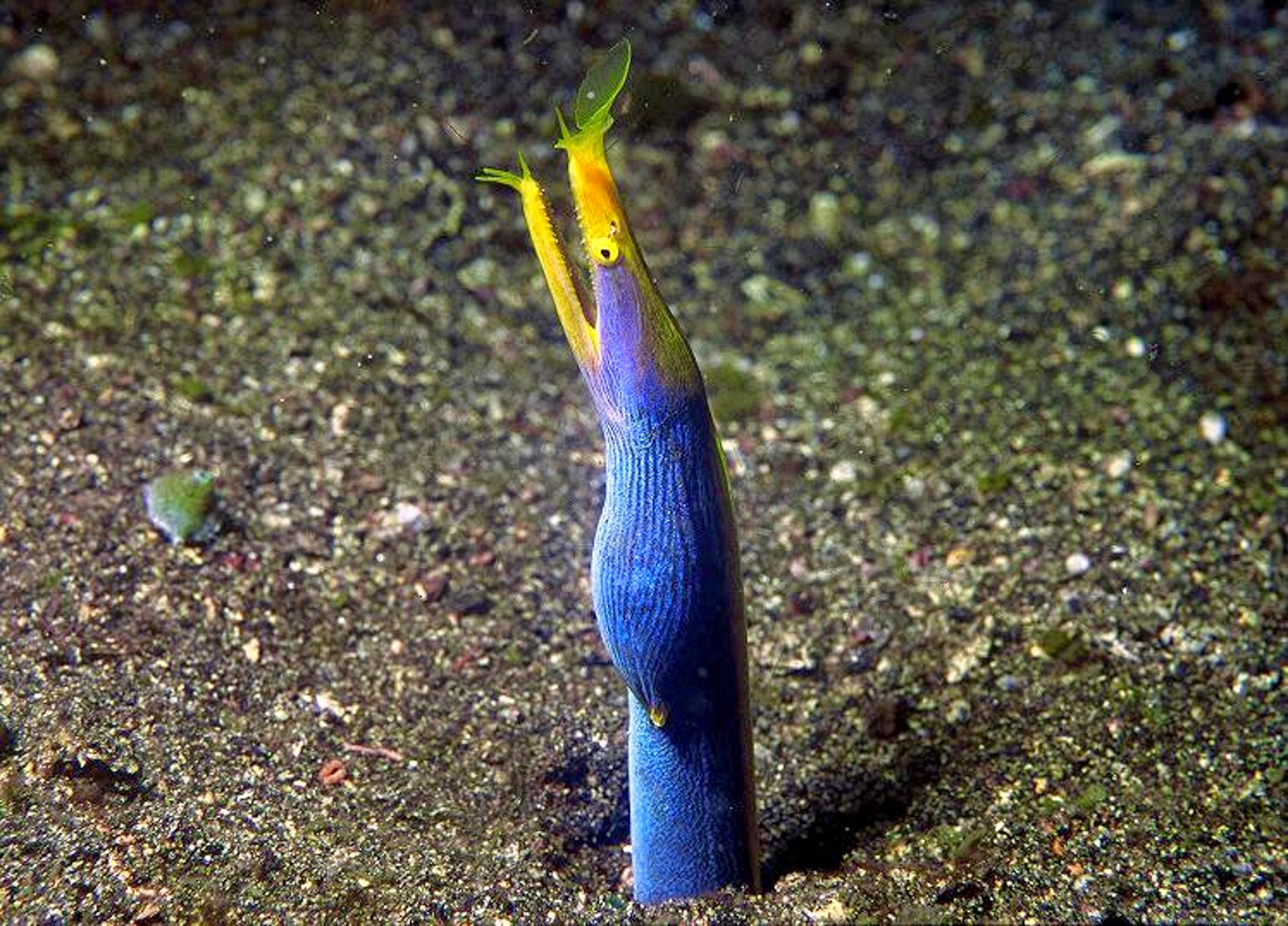