WAS A GOLDEN FRESHWATER OARFISH ENCOUNTERED DURING THE VIETNAM WAR? 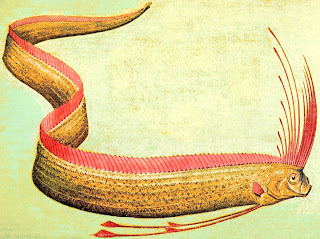 As I extensively documented in a previous ShukerNature blog article (click here), down through the years the giant oarfish Regalecus glesne has been variously proposed and deposed by conflicting cryptozoological opinion as a plausible identity for various serpentiform marine cryptids. Now, however, I present what has been claimed to be a giant oarfish – but one of exceedingly unusual appearance and activity, let alone location – as the identity of a Far Eastern serpentiform freshwater cryptid unexpectedly encountered during the Vietnam War.

In his book Very Crazy, G.I.: Strange But True Stories of the Vietnam War (2001), Vietnam combat veteran Kregg P.J. Jorgenson reported that in 1999 he learnt of a truly extraordinary encounter, allegedly made by Craig Thompson, who had served in Vietnam as a 20-year-old sergeant E-5 from Coeur d'Alene, Idaho, with Company B, 2d Battalion of the 503d Parachute Infantry Regiment, 173d Airborne Brigade. Thompson claimed that his platoon had been bathing one day in the Bong Son River, in Vietnam's Binh Dinh Province, when one of the soldiers caught sight of a large serpent-like creature swimming up the river towards them.

They estimated it to be at least 30 ft long, and 1-2-ft wide, covered in glistening gold scales. Of particular note was that its large square head bore a dark red plume that stood high out of the water as it swam, and its long undulating body trailed behind. Not surprisingly, Thompson and his men shouted to each another to get out of the water as they reached for their weapons; but before they had time to do so, the creature disappeared beneath the murky waters and was seen no more. 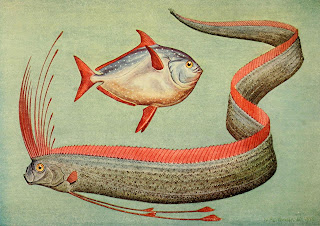 For a long time, Thompson remained perplexed as to the zoological identity of this 'golden dragon', until he learnt about the giant oarfish, which is what he now believes that he and his platoon saw – and certainly, this red-crested serpentiform species does indeed come to mind when reading his report.

Nevertheless, there are some notable discrepancies too, because giant oarfishes are normally silver in colour, not gold; they are marine and normally mesopelagic, not freshwater and surface-dwelling; and even in those very rare instances when they are seen swimming near the surface (click here to view a video of one such instance), they do not do so with their crest erect, standing high out of the water. So if Thompson's report is genuine, how can these anomalies be explained? 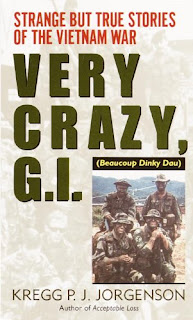 In his book, Jorgenson claimed that gold and brown versions of the giant oarfish have been found in Australia and also off Mexico, but I have not seen pictures of any such specimens. True, reflecting sunlight and/or river silt clinging to its scales may conceivably have rendered the creature golden in appearance, but in view of how closely and clearly it was seen (and by so many eyewitnesses, not just one), both options seem rather unlikely. Equally, I am not aware of any records of the giant oarfish turning up in rivers, nor indeed of it swimming anywhere at all with its red crest raised up above the water surface. Certain moray eels in the Far East do venture into freshwater, and have golden-brown scales, but they are far smaller than the dimensions offered for the Vietnam creature, and, crucially, they do not possess the latter's high red crest, which is a diagnostic characteristic of the giant oarfish. At present, therefore, Thompson's freshwater 'golden dragon' oarfish remains an unresolved enigma.

Yet if such a creature (or cryptid, as it assuredly must be) really does exist, and regardless of whether or not it actually is a giant oarfish, it may help to explain at least some of the ancient Far Eastern legends of golden freshwater dragons, and also of crested nagas with gilded scales - as regally portrayed, for instance, by various imposing statues at Bangkok's Royal Palaces in Thailand. 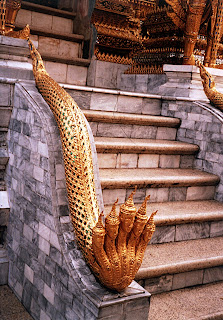 If anyone reading this ShukerNature article has come upon information regarding golden oarfishes, whether of freshwater or of marine occurrence, I'd welcome any details that you could post here – thanks very much!

Also, my thanks to Matt Bille for bringing to my attention Jorgenson's book containing Thompson's very intriguing report. 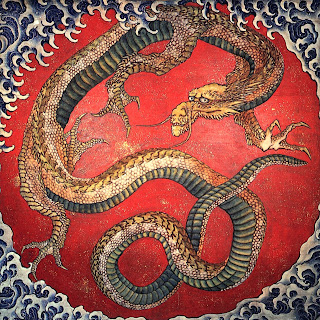