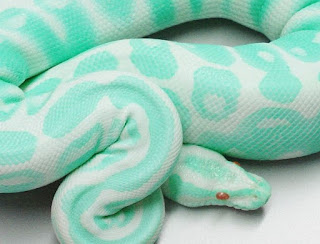 Photograph of a supposed green and white ball python, found by me on Pinterest (see below for © of original photograph)

Having a longstanding interest in animal colour morphs, I knew that something was very wrong – distinctly off-colour, in every sense – when, while browsing on the image-sharing/-hosting website Pinterest a couple of days ago in search of some unusual animal photographs to pin to my recently-created Pinterest board devoted to cryptozoology, animal mythology, and (un) natural history, I came upon the remarkable picture opening this present ShukerNature blog article. (Click here to view my Pinterest board - but you'll need to sign into Pinterest's site once you've clicked this link before it will let you see my board.)

For although I knew that a dazzling range and vast number of colour morphs have been developed for many snake species (including various pythons and boas) commonly sold in the pet trade (such selectively-bred forms being referred to as designer snakes), I felt pretty sure that these did not include a green and white variety for the African ball python Python regius (aka the royal python), regardless of what my eyes were seeing when looking at this particular photograph. (I know that a morph dubbed 'green' does exist, but in reality it is merely khaki, not grass-green like the specimen in this photo.) Anxious not to lose it, however, I swiftly pinned it to my Pinterest board, and then did what I always do as standard practice nowadays whenever confronted by a strange or unexpected animal picture – I conducted a Google image search for it online, in the hope of tracing its origin. 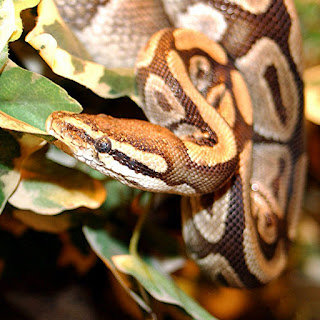 A normal, wild-type specimen of the ball python (public domain)

But all that I could find, pages and pages of them, were links to this self-same image on dozens of other Pinterest pages as well as many pages on other image-sharing/-hosting websites too, such as Tumblr and Flickr, yet with no clues whatsoever as to where it had originated. I didn't even come upon a single comment from any of these numerous image-sharers that queried whether these pythons of a very different colour were genuine. (Then again, if it's on the internet it must be true! lol)

Something that I did find, however, was that this photo of a green-and-white ball python was not one of a kind, because during my search I discovered two equally unlikely variations upon its crazy colour scheme. 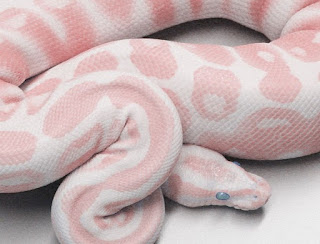 The same photograph as the one opening this ShukerNature blog article, and again common on image-sharing/-hosting websites, but in which the green hue has been replaced by a pink hue (see below for © of original photograph)

That is to say, I found some copies of exactly the same photo but in which the green hue had been replaced by pink, and some other copies in which it had been replaced by lilac – both of them once again being shared ad infinitum on Pinterest, Flickr, Tumbr, etc, but also once again with no clues as to where either of these variants had originated, and no challenges to their serpentine subjects' authenticity. 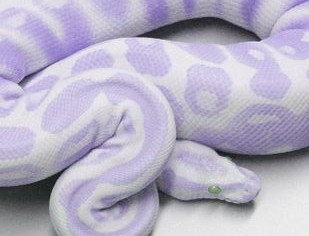 The same photograph as the one opening this ShukerNature blog article, and again common on image-sharing/-hosting websites, but in which the green hue has been replaced by a lilac hue (see below for © of original photograph)

The fact that I had now uncovered three different colour versions of the very same photograph meant either that two of these versions were fakes, photo-manipulated by person(s) unknown from the third, or that all three were fakes, photo-manipulated from a true-to-life original version that I had yet to locate online. I favoured the latter possibility, because, as already noted, I was not aware of any comparable yet genuine green, pink, or lilac colour morphs existing for the ball python, and after checking a number of websites devoted to ball python morphs I found no evidence whatsoever that any of the three did indeed exist. Clearly, therefore, there was a fourth, original, unmodified version of the photo out there somewhere, currently unseen by me, and which would prove to be the original version – but what might the snake in it look like, what would its true colouration be?

When I had first seen the green version, it had struck me straight away that, ignoring its markings' bizarre colouration and focusing instead upon their form and paleness, the snake recalled the ball python's very abundant golden colour morph. This particular colour morph has been developed by selective captive breeding in a number of other constrictor species too, perhaps most famously in the Burmese python P. bivittatus. Golden specimens of this latter species are exceptionally popular, very highly-prized pets due to the enhancement of their already beautiful appearance by way of the huge and extremely impressive body size for which this species is renowned (and which, again, is actively selected for when captive-bred by the pet trade). 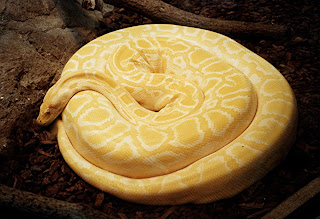 Genetically speaking, this golden morph is xanthistic, i.e. it occurs due to the expression of a certain specific mutant gene allele that causes a specimen possessing this allele to produce an excess of yellow pigmentation; sometimes the specimen's normal red pigment for its species is lacking and has been replaced entirely by yellow pigment. Despite this, however, in the pet trade xanthistic snake specimens are often confusingly called albinos (yet, genetically, this term should only be used to describe pure-white specimens with pink eyes, such specimens being caused by different gene alleles from those responsible for xanthism). The most sought-after xanthistic pythons of all are ones that lack both red and black pigmentation, resulting in exceptionally handsome specimens that seem almost to emit a golden glow when viewed under certain levels of illumination, and are known technically as amelanic xanthistic pythons.

Consequently, I decided to conduct another Google image search, but this time using the specific search phrase 'albino ball python' – and sure enough, after scouring through countless photos of such snakes, I finally came upon one that, except for the snake's colour in it, was identical to the green, pink, and lilac versions that I'd previously encountered online. There could be no doubt – this particular photograph of a normal, real-life golden ball python was the original that had been photo-manipulated very professionally if anonymously by agent(s) unknown. And here, as absolute proof, is that original, undoctored photograph. 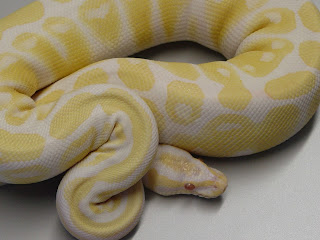 This photograph had been snapped without flash by American photographer Nat Turner on 22 May 2004, it depicts what Nat describes as a large female specimen, and it had been posted by him onto his Flickr site, which is where I found it. Moreover, it is one of several photos by Nat that seem to depict the same specimen, and which are all contained in an online Flickr album of his entitled 'Snakes'.

The quasi-coloured mock pythons beloved and believed in by so many online image sharers were no more – a trio of counterfeit serpents duly debunked and discarded, yet another case of photo-manipulation chicanery summarily expunged from the archives of valid zoological anomalies. 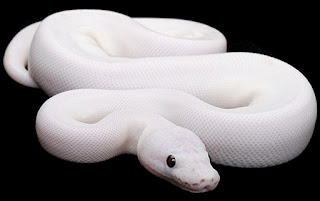 Incidentally, another very popular python morph that is sometimes termed albino in the pet trade, but which once again is very different genetically, is the snow python. For although it does possess the albino mutant gene allele, it also possesses the axanthic mutant gene allele, whose effect is the exact opposite of the xanthic version, because it does not increase yellow pigmentation but reduces it instead. The combined effect of these two alleles' expression is an ethereal-looking snake that is pure-white all over like a bona fide albino specimen, but has blue or black eyes, instead of pink ones like an albino.

Finally: it may seem scarcely believable but it is not unknown for park rangers and others to witness occasionally the astonishing spectacle of an enormous Burmese python locked in mortal combat with a mighty American alligator in the Florida Everglades. Such titanic battles occur because this huge non-native ophidian species has successfully established breeding populations here following pet specimens having escaped and/or been deliberately released during the 20th Century. And because both are top reptilian predators, whenever they encounter one another neither one of them is willing to back down. 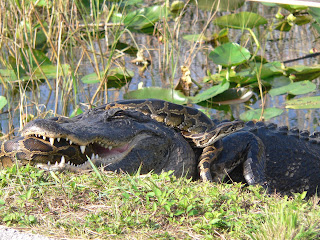