SHOOTING DOWN A PTERODACTYLIAN THUNDERBIRD – OR AT LEAST A SUPPOSED PHOTOGRAPH OF ONE! 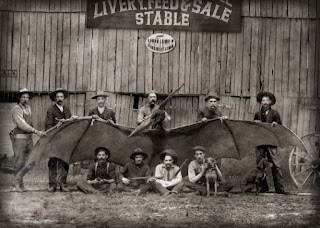 Sourced at last – this oft-posted online photograph of a supposed pterodactylian thunderbird shot by hunters (© Chris Smith, all rights reserved by him; NB – this picture is reproduced here on a strictly Fair Use non-commercial educational basis only)

The missing thunderbird photograph is among the most famous of all cryptozoological mysteries, and one that I have already documented in detail on ShukerNature (click here). As a result of its fame, over the years it has inspired the creation of many hoax photos purporting to be the real thing, and also many non-hoax pastiches of it – but unfortunately, when such photos appear online and become widely circulated there, it is not always apparent which is which, especially as all too many websites post such photos with credulous claims that they depict real creatures, thereby blurring further an already nebulous situation.

One supposed thunderbird photograph that has been circulated on numerous sites is the very striking illustration opening this present ShukerNature blog article, and which has intrigued me for some time. Looking at the pterosaur in it, it was evident to me that it was a model of a Pteranodon (but based upon a fruit bat's wings instead of a pterosaur's, hence the difference in finger count) that had been added via some form of photo-manipulation process to a possibly genuine, vintage photograph of hunters, thereby creating the oft-described scene that the real missing thunderbird photo allegedly depicts (always assuming, of course, that such a photo itself ever existed!).

Tracing this pterodactylian thunderbird photo from one website to another, the earliest appearances that I've been able to find for it online are from 2012 – but tonight, following yet another online search, inspired by having been alerted by a correspondent to its appearance in the newly-published December 2015 issue of the monthly magazine True West, I finally discovered both its origin and its creator! 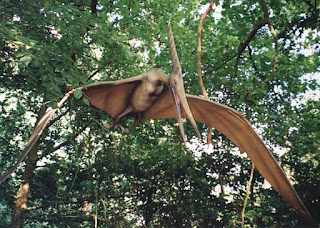 A model of Pteranodon in flight (© Dr Karl Shuker)

It turns out that the photo is not a hoax but rather an affectionate homage in pastiche form to the original missing thunderbird photograph, and once you know where to look online it is openly identified as having been created by highly-acclaimed digital illustration artist Chris Smith from Croydon in London, England, who has also created an equally wonderful digital image of a pair of mokele-mbembes encountered by some pygmies in the Congolese swamplands. Click here to view both of these excellent artworks, which were posted on the Vividvisuals website's blog by Chris on 15 April 2013, and where I discovered them tonight.

Also, an enlargement of his pterodactylian thunderbird photo can be viewed here on Chris's own Flickr page, which reveals that he created this spectacular image on 27 October 2010. I strongly recommend all fans of fantasy and science-fiction art to visit Chris's Flickr page (click here), because it contains some of the most spectacular digital artwork from these genres that I have ever seen, and even includes some awesome front-cover illustrations that he has prepared for Fortean Times.

Another cryptozoological case solved and closed!
UPDATE: 8 April 2021
A colourised version of this photograph, the colourisation having been carried out by Western author and illustrator Lorin Morgan-Richards, can be found here on his Instagram page, which contains many vintage Wild West photos beautifully colourised by him. From the accompanying description of it, however, Morgan-Richards seems unaware that the original b/w version of this particular photo is not a vintage picture but is instead a modern-day photo that was specially created by Chris Smith, and therefore is not the original thunderbird photo... Many thanks indeed to longstanding friend and fellow cryptozoological enthusiast Mike Playfair for kindly alerting me to this colourised version today. 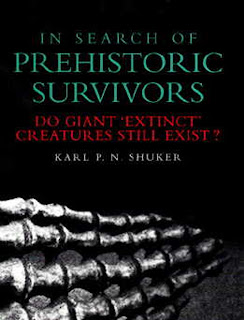