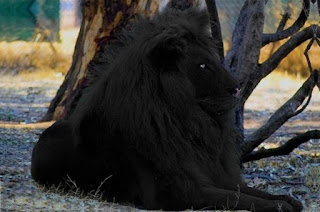 Yet another fake black lion photograph currently circulating online (© Bridges, reproduced here on a strictly non-commercial Fair Use basis only, exclusively for the purposes of education and review)

Several photographs purporting to be of genuine black lions (i.e. melanistic specimens) are presently doing the rounds on the internet, but as I exclusively revealed on ShukerNature quite some time ago (click here and here) they are all fakes, digitally produced from existing photos of normal lions or, in one instance, of a real white lion. Recently, however, I encountered online a black lion photo that I had not previously seen (and which opens this present ShukerNature blog article). So, just like before, I duly investigated it – and indeed, just like before, it duly turned out to be yet another photoshopped creation.

Using Google Image, I swiftly discovered that this photograph appeared in a sizeable number of websites, but in some of them the photo contained a small yet very telling inscription tucked away within its bottom left-hand corner – Worth1000.com – and, immediately, all became clear. For until it was incorporated within DesignCrowd.com's site, Worth1000.com had been a website long famous for its thematically-based competitions to produce first-class digitally-created images. The inscription present in this black lion photograph thereby confirmed that the latter image had been produced specifically for entering in one such competition, and therefore with no intention by its creator to deceive anyone. Unfortunately however, it has since been erroneously assumed by some websites to be a genuine photo of a genuine black lion. 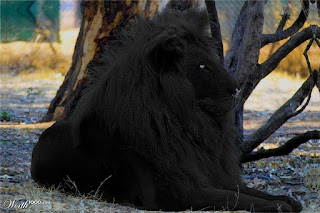 The same black lion photograph, but containing the Worth1000.com inscription, which had been removed from the version that I had first seen online (© Bridges, reproduced here on a strictly non-commercial Fair Use basis only, exclusively for the purposes of education and review)

The competition in question was entitled 'Color Blind 14' (click here to see all of the entries), and the username of the entrant who submitted this black lion photo was Bridges - my grateful thanks to Twitter colleague AI M for kindly supplying me with this information.

All that remained now, therefore, was to trace the original, non-modified lion photograph that had been used as the basis for the modified, black lion photo – and thanks once again to Google Image I was soon able to do this. Interestingly, as in one previous case involving the creation of black lion photos, it proved to be a photo not of a normal lion but of a rare white lion instead (such specimens are seemingly leucistic rather than albinistic, as they possess either blue eyes or normal-coloured golden eyes – click here for more details). The white lion in question was named Letsatsi, housed at the famous Lion and Safari Park in Gauteng, South Africa, and was photographed by Arno Meintjes on 24 September 2005. His photo appears on his Flickr site (click here), also on numerous other websites (including that of Project Noah – click here), and is included in the visual comparison below on a strictly non-commercial Fair Use basis only, exclusively for the purposes of education and review, alongside the fake black lion photo created from it by Bridges: 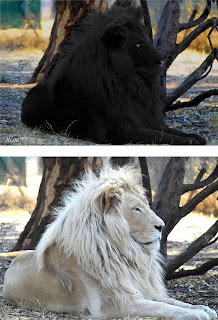 The fake black lion photo (top) alongside the original photo of a real white lion (bottom) (© Bridges / © Arno Meintjes – both photographs reproduced here on a strictly non-commercial Fair Use basis only, exclusively for the purposes of education and review)

More details concerning purported black lions, as well as white lions, spotted lions, striped lions, green lions, horned lions, winged lions, lion hybrids, and many other leonine anomalies, can be found in my books Mystery Cats of the World and Cats of Magic, Mythology, and Mystery. And to read a poem of mine inspired by the concept of a black lion, click here. 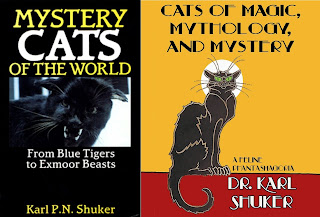