WATER CIVET VS AQUATIC GENET, OR MORPHOLOGY VS MOLECULAR BIOLOGY - A TALE OF TANGLED TAXONOMY 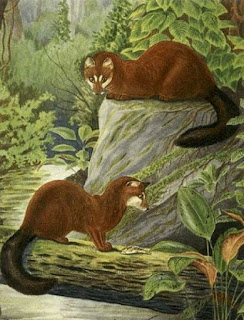 Originally a civet, nowadays a genet, unrecorded by science until 1913, never studied alive by scientists, and virtually unknown even to the local native people (a rare event indeed!), Genetta (=Osbornictis) piscivora is surely one of the world's most mystifying mammals.

Yet it is an exceedingly handsome, strikingly-coloured creature, with a densely-furred chestnut head and body, a black bushy tail (constituting almost half of the animal's total length of 3 ft), and white facial markings. The type specimen of this secretive viverrid was obtained on 1 December 1913 in a forest stream at Niapu, in what is now the northeastern portion of the Democratic Congo, by Drs James P. Chapin and Herbert Lang during the American Museum of Natural History's Congo Expedition. Six years later, its species was formally described by Dr Joel A. Allen from the museum, who named it Osbornictis piscivora, in honour of Prof. Henry Fairfield Osborn (who was greatly interested in the Congo Expedition), and recording its fish-eating proclivity. 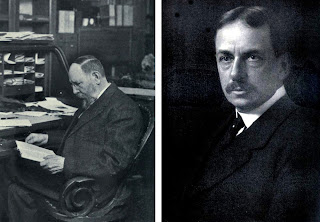 Although its anatomy suggests that it is most closely related to the genets, this anomalous species was long referred to as the water civet because it exhibits several features markedly at variance with typical genet morphology. Most obvious of these is its vulpine colouration, totally different from the black-and-white coat patterning of spots and bands synonymous with genets. In addition, the soles of its paws are unfurred, its teeth are much weaker and narrower than those of correspondingly-sized genets, its nose is somewhat smaller, its muzzle is shorter, and its overall size rivals that of the giant genet Genetta victoriae, the largest of the typical spotted Genetta species. Consequently, when formally describing and naming it, Allen assigned this novel viverrid to its very own genus, Osbornictis, in which it remained for many decades.

In 2004, however, a team of researchers who had been conducting a molecular-based comparison of several different viverrid genera, including Osbornictis and Genetta, published their findings in a Zoologica Scripta paper, in which they concluded that these two genera were sufficiently closely related for the water civet to be housed within Genetta, as Genetta piscivora. Since then, it has been known colloquially as the aquatic genet.

My model of this enigmatic species (© Dr Karl Shuker)

Most books state that the water civet (or aquatic genet) was totally unknown to the natives prior to its scientific discovery in 1913; this is not true. Along with the holotype, Lang and Chapin also obtained an incomplete specimen (lacking skull, tail, and feet) from a native; and in the local Kibila and Kipakombe languages, it has its own specific name - the esele.

Nevertheless, for the most part it is truly as much a mystery to them as it is to science, with virtually no information available concerning its natural history, and very few museum specimens. 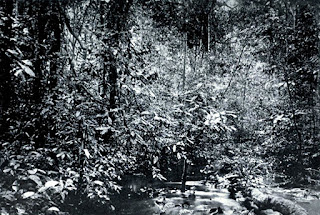 The type locality of this species (i.e. where its type specimen was obtained), a large forest brook at Niapu, photographed here at the height of the rainy season (public domain)

In 1996, however, a major new chapter was written in this species' sparse history, when veteran wildlife film-maker Alan Root announced that he had succeeded in filming a living specimen in its native Congolese habitat, hunting for fishes by gently tapping the water with its paws and then trailing its long white whiskers on the surface to detect any movements. This unique footage formed part of a special one-hour film of Congolese wildlife by Root entitled A Space in the Heart of Africa, which was first screened on British television within the long-running ITV Survival series in July 1996.

This ShukerNature blog article is adapted and updated from my book The Encyclopaedia of New and Rediscovered Animals, the most comprehensive book on this subject ever published. 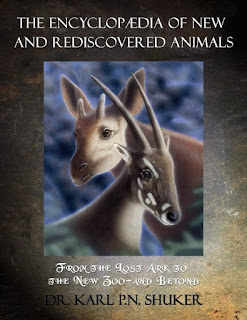