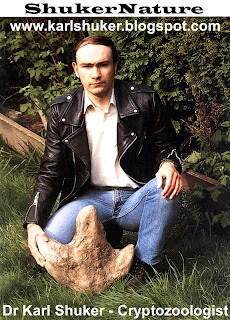 Publicity photograph of me with cast of a fossil dinosaur footprint, as featured in my X Factor interview (© Dr Karl Shuker)

Several years before a certain music talent show of the same name first appeared on British television (in 2004, to be exact) and subsequently elsewhere around the world, a superb full-colour partwork magazine published by Marshall Cavendish Limited and devoted to mysteries of many kinds (but particularly strong on cryptozoology) was appearing each fortnight in shops throughout the UK and beyond. Eventually running to 96 issues, this excellent magazine's title was The X Factor.

During its run, The X Factor published a number of cryptozoology-themed articles written by me, and also some interviews that I conducted with various fellow cryptozoologists and forteans. One of those interviews was with veteran British mystery cat investigator Trevor Beer (click here to read a transcript of it), another one was with mokele-mbembe seeker Prof. Roy Mackal (click here for a transcript). And in an enjoyable role-reversal, I was also interviewed myself for The X Factor, by CFZ founder Jonathan Downes, this interview subsequently appearing in issue #67. 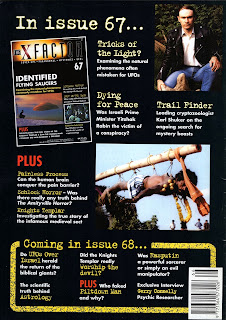 Back-cover X Factor advertisement for issue #67, which contained CFZ founder Jonathan Downes's interview with me - click picture to enlarge it for reading purposes (© Marshall Cavendish Limited – reproduced here on a strictly educational, non-commercial Fair Use basis for review purposes only)

The X Factor was a singularly authoritative, fact-filled publication, in many ways the natural successor to an equally significant, earlier partwork, The Unexplained, which was originally published during the early 1980s. Yet whereas the latter has been republished many times and in a number of different formats, The X Factor has never reappeared, tragically, in spite of its considerable popularity, so its contents are nowadays not as readily obtainable. As a result, I have been contacted on numerous occasions down through the years by correspondents and other readers lacking the X Factor issue in question (or the entire series), asking whether there was any possibility of reading Jon's interview with me that featured in issue #67, way back in 1999.

So now, finally, in answer to those many requests, I have scanned the full interview and am presenting the relevant three pages herewith – please click each one to expand it for reading purposes. NB – these pages are © Marshall Cavendish Limited/Jonathan Downes/Dr Karl Shuker, and are reproduced here on a strictly educational, non-commercial Fair Use basis for review purposes only. 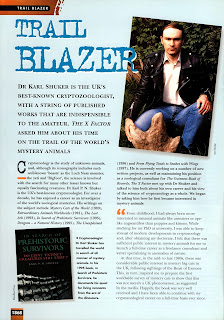 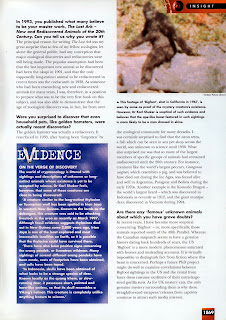 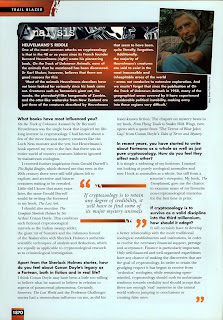 My three-page interview in issue #67 of The X Factor ( © Marshall Cavendish Limited/Jonathan Downes/Dr Karl Shuker, and are reproduced here on a strictly educational, non-commercial Fair Use basis for review purposes only)

Finally: Caveat lector – this interview was conducted back in 1999, since when I have read very extensively on the subject of the bigfoot in the USA, and have corresponded with many US bigfoot investigators and alleged observers, as a result of which I am nowadays far less sceptical than I previously was concerning this cryptid's reality there. 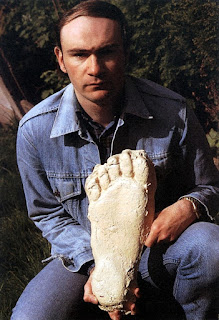 Holding the cast of a bigfoot print discovered in Washington State, USA, during the early 1980s, and sent to me by veteran bigfoot researcher Prof. Grover Krantz (© Dr Karl Shuker)