THE GIANT ANT GODS OF KLUMPOK, AND THE SPIDER MONSTER OF SUNDRA STRAIT - THEY REALLY WERE 'STRANGER THAN PEOPLE' ! 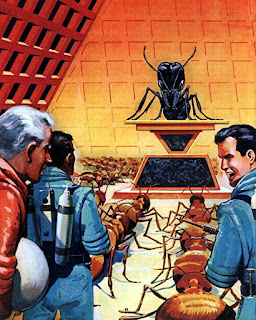 Stunning artwork from 'Klumpok' in Stranger Than People (© YWP – reproduced here on a strictly non-commercial, educational Fair Use basis for review purposes only)

It is always fascinating and often truly eye-opening to learn about and reflect upon books read by a person during their childhood that had such an impact upon them that these volumes subsequently influenced that person's entire future career. In my case, I owe a great deal to two very different but equally influential books, one of which is much better known than the other. The former is Dr Bernard Heuvelmans's classic cryptozoology tome On the Track of Unknown Animals, whose seismic impact upon my life I have already blogged about on ShukerNature (click here to read my account of how this came to be).

The second book, conversely, is a no-less-wonderful but sadly long-since-forgotten one. It is a compendium of famous true-life and fictitious mysteries entitled Stranger Than People – and here is what I wrote about it in the introduction to one of my own compendia of mysteries, Dr Shuker’s Casebook (2008):

It is well known that my passion for cryptozoology was ignited by the 1972 Paladin paperback reprint of Dr Bernard Heuvelmans’s classic tome On the Track of Unknown Animals, bought for me as a birthday present by my mother when I was around 13 years old. However, my interest in mysterious phenomena as a whole stemmed from an even earlier present – a copy of Stranger Than People, an enthralling compendium of mysteries from fact and fiction, published in 1968 by YWP, and aimed at older children and teenagers, which I saw one day in the Walsall branch of W.H. Smith when I was 8 or 9 years old, and was duly purchased for me as usual by my mother.

Within its informative, beautifully-illustrated pages I read with fascination – and fear – about Nessie and the kraken, vampires and werewolves, the Colossus of Rhodes and Von Kempelen’s mechanical chess player, dinosaurs and the minotaur, witches and zombies, yetis and mermaids, leprechauns and trolls, Herne the Hunter and Moby Dick, giants and the cyclops, feral children, the psychic powers of Edgar Cayce, and lots more. It even included two original – and quite superb - sci-fi short stories: ‘Klumpok’, about giant ant-like statues found on Mars and what happened when one of them was brought back to Earth; and ‘The Yellow Monster of Sundra Strait’, in which a giant transparent globe containing an enormous spider-like entity rises up out of the ocean; plus a thrilling (and chilling) fantasy tale, ‘Devil Tiger’, featuring a royal but malevolent weretiger that could only be killed with a golden bullet.

Needless to say, I re-read the poor book so many times that it quite literally fell apart, and was eventually discarded by my parents. After I discovered its loss, I spent many years scouring every bookshop for another copy, but none could be found. Not even Hay-on-Wye – world-famous as ‘The Town of Books’ with over 40 secondhand bookshops – could oblige. A few years ago, however, the Library Angel was clearly at work, because one Tuesday, walking into the bric-a-brac market held on that day each week in my home town of Wednesbury, on the very first stall that I approached I saw a near-pristine copy of Stranger Than People! Needless to say, I bought it, and to this day it remains the only copy that I have ever seen since my original one. 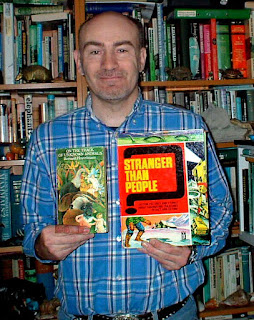 Holding the two books that sparked my lifelong interest in cryptozoology and other subjects of mystery – Stranger Than People, on the right, and the Paladin paperback edition of Dr Bernard Heuvelmans's On the Track of Unknown Animals, on the left (© Dr Karl Shuker)

Tragically, however, this superb book did not appear to have had a very large print run, was never reprinted, and as noted earlier it is nowadays long-forgotten and very scarce. Indeed, due to this book’s great rarity today, it occurred to me that few people will have been fortunate enough to have ever read those marvellous, original short science-fiction stories from it that I mentioned above, yet which remain among my own personal favourites within that genre. 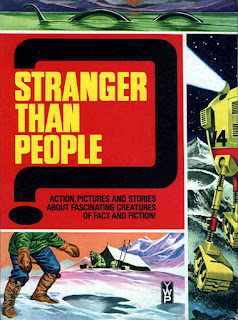 My much-treasured second copy of Stranger Than People (© YWP/Dr Karl Shuker – reproduced here on a strictly non-commercial, educational Fair Use basis for review purposes only)

Consequently, after almost 50 years and for the very first time anywhere on the internet, utilising the Fair Dealing/Fair Use convention I was delighted to be able to rectify this sad situation a while ago by presenting two of them on ShukerNature's sister blog, The Eclectarium of Doctor Shuker, in the context of review. 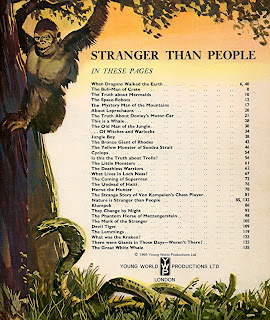 The Contents page from Stranger Than People, revealing the wonderfully diverse and fascinating array of subjects documented within this amazing book - please click to enlarge for reading purposes (© YWP – reproduced here on a strictly non-commercial, educational Fair Use basis for review purposes only)

So for any of you reading this article of mine here on ShukerNature but for some inexplicable reason have never visited my Eclectarium before (shame on you, shame, I say!), just click here to access scans in the form of readily-readable enlargements of the original pages from Stranger Than People for 'Klumpok', and here for those for 'The Yellow Monster of Sundra Strait' (and yes, it is spelled 'Sundra', not 'Sunda', in the story, although whether by accident or design I cannot say).

I hope that you enjoy encountering the giant ant gods of Klumpok and the Sundra Strait's globe-encapsulated spider monster just as much as I did – and still do. 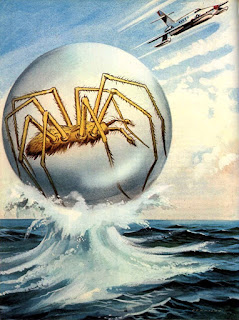 The deadly globe-encapsulated yellow monster of Sundra Strait as depicted in spectacular artwork from Stranger Than People (© YWP – reproduced here on a strictly non-commercial, educational Fair Use basis for review purposes only)