UNFURLING CHINA'S FENG-HUANG – THE 'OTHER' PHOENIX 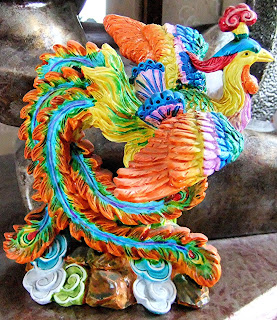 One of the most famous legendary birds is the Egyptian phoenix, but traditional Chinese mythology has its very own equivalent of sorts – the 'other' phoenix, or, as it is commonly referred to in China, the feng-huang.

Just like the Egyptian phoenix, the feng-huang has been identified with a range of real birds. A very popular candidate is the familiar blue peacock Pavo cristatus (in depictions, the feng-huang's splendorous tail is frequently decorated with numerous ocelli or eyespots, thereby closely resembling the famously ornate train of this species). 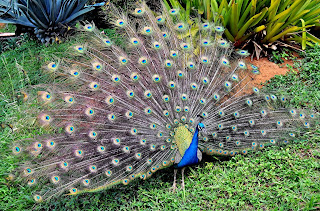 In an earlier ShukerNature article (click here to read it), I revealed that there have been suggestions that Egypt's phoenix may have been based upon preserved skins of certain bird of paradise species brought back to Phoenicia from their far-off New Guinea homelands by early seagoing traders. Moreover, in 1967 a Chinese researcher postulated that one or more birds of paradise native to New Guinea may have been the basis for the feng-huang too. 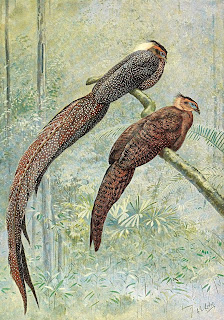 A pair of crested argus pheasants painted by George Edward Lodge, the larger specimen being the male (public domain)

In a lengthy paper written principally in Chinese (and published by the Bulletin of the Institute of Ethnology of Taipeh, Academia Sinica, during autumn 1967), Tzu-Chiang Chou based his assertion upon four primary points, summarized as follows:

1. According to Tzu-Chiang Chou, in the Chinese hieroglyphics of the Shang Dynasty (1384—1111 BC), the shape of the Chinese character termed ‘Feng’, denoting the phoenix, resembled the typical, effusively-plumed Paradisaea birds of paradise more closely than any other proposed contender for this fabulous bird’s identity.

2. The shape used for the character denoting the wind within this system of hieroglyphics was comparable to the Feng character, implying that the phoenix was in some way associated with the wind. 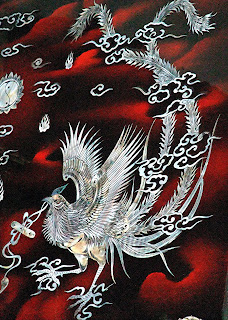 3. He offers many examples from ancient Chinese writings and from bird designs on the bronzewares of ancient China’s pre-Chin period (i.e. prior to 221 BC) that suggest a Paradisaea species as their model.

4. He presents material that he interprets as evidence for believing that as recently as 1100 AD (during the Sung Dynasty), southern China was home to two native species of bird of paradise, which have since become extinct.

From the examples of Shang Dynasty hieroglyphics depicting the ‘Feng’ and ‘Wind’ that Tzu-Chiang Chou provides, a certain, but by no means unequivocal, similarity to at least two different birds of paradise (greater, Paradisaea apoda, and king, Cicinnurus regius) is present, but his claim that a third example specifically comprises a depiction of a composite bird of paradise (created from the most striking characteristics of a wide range of different species) is less convincing. As for the wind connection, he points out that in Chinese the birds of paradise are referred to as ‘wind-birds’, because they fly against the wind. 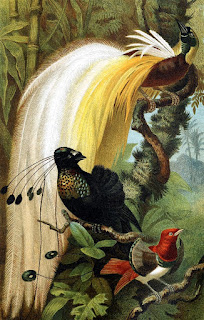 Within the ancient Chinese texts, the Chinese phoenix is described as having colourful plumage, long tufts of feathers sprouting from its flanks, a fondness for dancing, and communal behaviour – all features shared by the Paradisaea birds of paradise (whose males do display in groups rather than singly). Conversely, in more recent Chinese accounts a very different phoenix is described - a somewhat grotesque entity with a snake’s neck, a tortoise’s shell, and a fishtail – but Tzu-Chiang Chou believes that this image is wholly imaginary, not based upon observations of real forms.

So far, then, Tzu-Chiang Chou’s evidence for the identification of the Chinese phoenix as a Paradisaea bird of paradise is quite persuasive, but his fourth point is much more contentious. Quoting from various early Chinese encyclopedias, he provides descriptions of two exceptionally handsome birds supposedly native to China in those long-departed days, at least according to the authors of the descriptions. 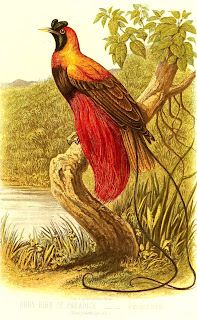 One bird, allegedly inhabiting Canton Province during the Sung Dynasty, referred to by the natives as the feng-huang, and said to have long sashes of red plumes on its flanks, beneath its wings, is identified by Tzu-Chiang Chou as the red bird of paradise Paradisaea rubra. This species is officially known only from the Western Papuan islands of Saonet, Waigeu, and Batanta (and perhaps Ghemien too).

The other mystery bird, reported from Kwangsi Province, again during the Sung Dynasty, and called the u-feng or black phoenix, was reputedly bluish-green and purple, with a head crest and an elongated tail with bunches of feathers at each end. Tzu-Chiang Chou considers this to be the long-tailed (=black) sicklebill bird of paradise Epimachus fastosus (formerly magnus). 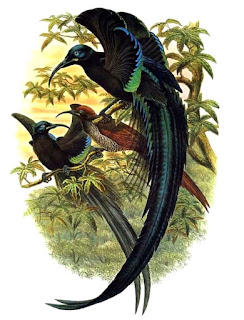 Two males and one female of the long-tailed sicklebill bird of paradise, painted by Richard Bowdler Sharpe (public domain)

These identifications, however, are far from precise. Goldie’s bird of paradise Paradisaea decora and Count Raggi’s P. raggiana also have sprays of long red plumes emerging from their flanks beneath their wings; and the sicklebills do not have crests – the equally long-tailed species of astrapia do, but (in common with the sicklebills) they do not have bunches of feathers at each end of their tails. In any event, I consider it highly unlikely that any genuine birds of paradise have ever been native to China, even if we accept Tzu-Chiang Chou’s claim that in earlier days its climate was much warmer, and hence closer to the tropical temperatures of New Guinea.

Ornithological experts believe that the birds of paradise originated in the mid-mountain forests of New Guinea, and as the present diversity of species progressively evolved, the family’s range gradually expanded, infiltrating north-eastern Australia as its distribution’s southernmost limit and extending as far to the west as the Moluccas (home to Wallace’s standardwing Semioptera wallacei and the paradise crow Lycocorax pyrrhopterus). 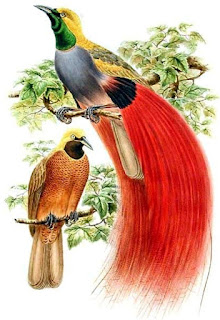 It is reasonable to suppose, therefore, that if the family were to send representatives beyond the Moluccas, ultimately reaching southern China, it would do so either via the Philippines, a handy series of stepping stones to the Asian mainland and thence China, or via a longer Sulawesi-Borneo-Vietnam course. Yet there is no evidence for the former existence of birds of paradise in any of these countries, thereby undermining support for their onetime occurrence further north-west, in China itself.

A far more likely option is that early travellers visiting New Guinea arrived at China with preserved bird of paradise skins, and perhaps even some live specimens, whose outstanding appearance would guarantee their documentation in major Chinese texts of the day – their authors probably being unaware that these birds had originated from beyond China. 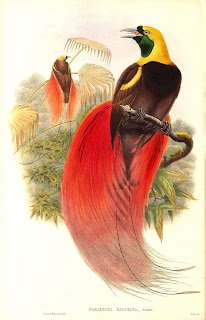 Another legendary Chinese bird that may conceivably have been inspired at least in part by bird of paradise skins or specimens is the vermilion bird. Totally distinct from the feng-huang, this noble and elegant bird is a mythological spirit creature, one of the four symbols of the Chinese constellations. Representing the south of China and the summer season, it is very selective where it perches and what it eats, and its gorgeous plumage incorporates many different hues of reddish orange.

Sadly, however, like so much in cryptozoology, all of this is mere speculation, nothing but unconfirmed conjecture at present, especially as illustrations can be notoriously inaccurate or so stylized that the true morphological appearance of their original subjects remains obscure. 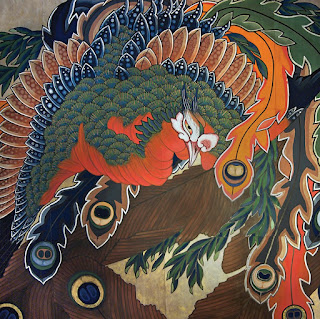 This ShukerNature blog article was adapted from a section in my book Extraordinary Animals Revisited. 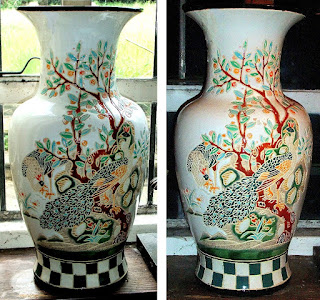 A large, modern-day, Chinese-style vase very handsomely decorated with a pair of traditionally-depicted feng-huang birds, photographed in daylight (on left) and at night (on right) (© Dr Karl Shuker)
Posted by Dr Karl Shuker at 00:07