AN UNDULATION OF SEA SERPENTS, AND OTHER COLLECTIVE NOUNS FOR CRYPTIDS AND MYTHICAL BEASTS 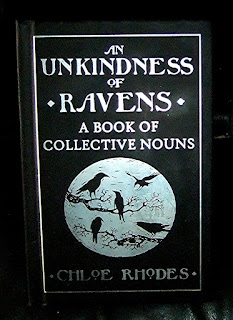 My newly-acquired copy of a fascinating book that I've been seeking for years – An Unkindness of Ravens: A Book of Collective Nouns by Chloe Rhodes, first published in 2014 by Michael O'Mara Books Limited (© Chloe Rhodes/Michael O'Mara Books Limited – reproduced here on a strictly non-commercial Fair Use basis for educational/review purposes only)

As both a quizzer and a zoologist, when attending quizzes I am always expected by my team mates to know each and every one of the countless (in)famous, often highly-imaginative, and sometimes zoologically-nonsensical collective nouns for animals that seem to occur regularly but exclusively in quizzes (as they rarely if ever occur in formal zoological writings – or anywhere else, for that matter!).

These weird, tortuous terms include everything from a murder of crows, a wisdom of wombats, a pandemonium of parrots, a nye of pheasants, a business (or fesnyng) of ferrets, a charm of nightingales, an embarrassment of pandas, and an unkindness of ravens, to a troubling of goldfishes, an ambush of tigers (despite tigers being solitary animals!), an exaltation of larks, a tower of giraffes, an army of frogs, a smack of jellyfishes, a fever of stingrays, and a kettle of vultures (when circling), to mention but a very few of the vast array of such examples in existence. But what are the origins of these nightmarish nouns? I once had a golden opportunity to find out, but I let it slip through my fingers – until very recently, that is. Here's how.

Several years ago, I saw in one of those Booksale cut-price book/stationery shops that are present in most towns here in England, a small hardback book actually devoted specifically to collective nouns and providing extensively-researched accounts revealing their numerous, exceedingly varied origins. I spent quite a while perusing this book with great interest, yet, oddly, I didn't buy it, even though it wasn't expensive. Me being me, however, by the time that I'd arrived back home I was already regretting not having done so, but when I returned to the shop a couple of days later to buy the book, it had gone (in fact, there had been about four copies of it there on my previous visit, but during those two crucial, intervening days they had all been sold).

Despite checking in numerous Booksale shops in a number of different towns since then, I never saw it again, and because I'd neglected to note its title and author, I was unable to track it down online either. All that I could recall was that it was a small paperback-sized hardback with a black cover and that it had been published several years ago. And then came yesterday morning... 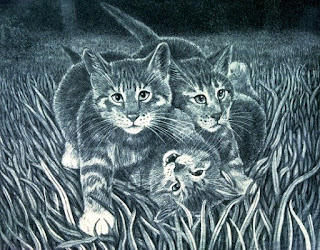 That was when I was visiting a local car boot sale (England's equivalent to yard sales in the States), where at one stall all of the books, CDs, and DVDs were three for £1, mix 'n' match. I chose one DVD straight away (a sci fi-themed movie new to me entitled Time Shifters), but struggled to find anything else to complete the required trio of purchases. Eventually I found a second DVD, but no other DVDs there were of even remote interest to me, nor were the CDs or the books.

Then I noticed that a pile of books was almost hidden underneath a large box at the front of this stall, so I moved the box to look at the books. And there, right on the top of the pile, was a small hardback book with a black shiny cover, whose silver-lettered title read as follows: An Unkindness of Ravens: A Book of Collective Nouns. It was written by Chloe Rhodes and published in 2014. As soon as I opened it, and perused a few of the pages, I realised that this was indeed THE long-lost book on collective nouns that I'd been seeking ever since that ill-fated day when I'd failed to buy it in the Booksale shop! Needless to say, I quickly paid my £1 and put the two DVDs and my prodigal book safely in my carrier bag. Result!

I've started to browse through An Unkindness of Ravens, and can honestly say that it is one of the most fascinating and joyously quirky books that I've had the good fortune to read for many a long while. The Library Angel and the Seraph of Serendipity were certainly looking down upon me with great benevolence when I elected to move that  car boot stall's large box on the off-chance that the books underneath it may include something of worth!

After I had posted on my Facebook group 'Animal Discoveries and Curiosities' later that same day some details concerning my fortuitous literary find, they soon came to the attention of longstanding FB friend and University of Nottingham philosophy lecturer/researcher Ian James Kidd, who suggested a few apt and amusing cryptozoology-themed collective nouns. Namely: 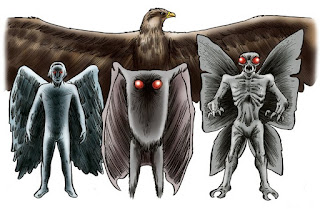 A flutter of Mothmen.

A hump of Nessies.

A paucity of dodos.

A shower of frogs (Forteans will particularly appreciate this one!).

A trek of cryptozoologists.

A wake of sea serpents (Heuvelmans-inspired).

After reading these, cryptozoological enthusiast Curt Gleason proffered a very apposite one of his own:

A storm of thunderbirds. 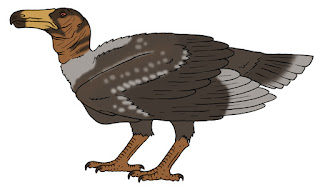 Moreover, I was inspired to devise some too. After all, as virtually every known animal that you can think of has been allocated a collective noun, why shouldn't unknown and legendary animals receive the same courtesy? So here is a brief listing of collective nouns that I have duly coined for various mystery and mythical beasts:

An atmosphere of sky beasts.

An avalanche of yetis.

An awakening of krakens.

A beaching of Gambos (and Trunkos – but also see later here).

A bewilderment of bunyips.

A bloodlust of vampires.

A bottle of homunculi.

A composite of chemosits (or Nandi bears).

A conflagration of dragons.

A confusion of basking sharks (identifiers of supposed sea serpent carcases will appreciate this one!).

A curse of werewolves (or a lurking of lycanthropes?).

A dinsdale of leviathans (in homage to the late Tim Dinsdale who wrote a very influential book on aquatic monsters entitled The Leviathans).

A doom of Black Dogs.

A drowning of kappas.

An evanescence (or elusiveness) of mystery cats.

A ferocity of dobhar-chús (aka Irish master otters).

A foliation of Green Men.

A fraudulence of Feejee Mermaids.

A furnace of salamanders.

A gallop of pookas (and kelpies).

A gorging of Gévaudan Beasts.

A haranguing of harpies.

A hoard of griffins (griffins were famous hoarders of gold).

A horror of Lizard Men.

An improbability of thylacines (which I coined a while ago for a chapter on this 'officially' extinct yet frequently reported wolf-like marsupial in my book ShukerNature Book 2).

An inebriation of satyrs.

A joke of jackalopes.

A jungle of orang pendeks.

A majesty of king cheetahs.

A mansi of Champs (after the famous Sandra Mansi photo of what may have been the Lake Champlain monster).

A menace of manticores.

A merriment of mer-folk. 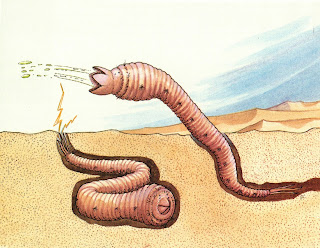 A minion of minotaurs.

An oddity of onzas.

A panic of Big Grey Men of Ben MacDhui.

A petrification of gorgons.

A reverie of blue tigers.

A shock of Mongolian death worms.

A shriek of mandrakes.

A singularity of Questing Beasts (there's only one!).

A somnolence of sirens.

A squadron of rocs (or rukhs).

A stench of skunk apes (and mapinguaris).

A strangeness of nundas ('nunda' is Swahili for 'strange one').

A twinning of centaurs (which are half-human, half-horse).

An undulation of sea serpents (a fair few known animals lay claim to more than one collective noun, so both mine and Ian's can be used for sea serpents) or Irish horse eels.

A trickery of tengus (public domain)

And last but certainly not least:

A concealment of cryptids.

Incidentally, there actually is an officially-recognised collective noun for unicorns – a blessing, which came up in a pub quiz once.

No doubt I'll think up more cryptozoology- and zoomythology-themed collective nouns as time goes by, and when I do, I'll include them here. So be sure to check back from time to time and see the latest additions to this list. Who knows, some of them may even catch on and become officially-accepted terms!

If so, you read them here first!

Postscript: I've just discovered that a couple of books on collective nouns for animals have also been published in the USA. These are: An Exaltation of Larks: The Ultimate Edition (1991) by James Lipton, and A Murmuration of Starlings: The Collective Nouns of Animals and Birds (2013) by Steve Palin.

I think it highly likely that at least some of these volumes will be winging their way to me very shortly, to add to my newly-acquired one. A veritable collection of collective noun books, no less! 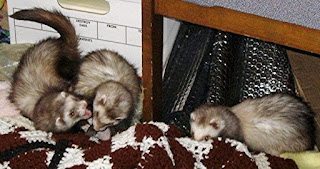 One of the strangest of all collective nouns for animals – a fesnyng of ferrets (but also known more memorably as a business); this bizarre word dates back as far as the 15th Century (© John Owens/Wikipedia – CC BY 2.5 licence)
Posted by Dr Karl Shuker at 22:27