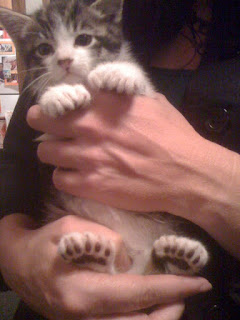 One of the most frequently reported and familiar teratological conditions exhibited by humans is the possession of extra fingers, toes, or both – which is known as polydactyly or hyperdactyly. This genetically-induced phenomenon has also been widely reported among many other animals, including the domestic cat Felis catus – a species that normally has five toes on each of its fore paws, and four on each of its hind paws.

Monitored breeding programmes with polydactylous cats (which are also known as mitten cats, boxer cats, or thumb cats, depending upon toe numbers present) suggest that the trait is dominant and autosomal (i.e. not sex-linked), but the variation of phenotypic expression is so great that more than one mutant allele may well be responsible.

In its least visible form, feline polydactyly results in one or both of the fore paws sporting a slightly larger than normal first digit (as it contains an extra phalanx bone), which stands apart from the rest of the paw like a false thumb. Sometimes, however, this 'false thumb' is flanked by one or even two well-formed supernumerary toes, thereby raising the paw's total number to six or seven. 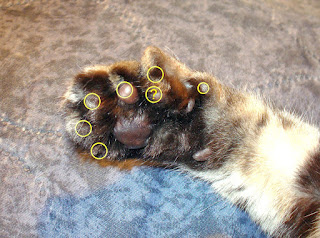 Right front paw of a male polydactylous domestic cat; each circle indicates a toe (six confirmed), and the circle with a question mark indicates what might be a further, seventh toe (public domain)

Feline polydactyly can be limited to the fore paws (but not normally to the hind paws), or can be exhibited by fore and hind paws. A classic example of the latter state was displayed by a very handsome polydactylous tabby called Vodka, who shared his long and happy life with Frances Shipp, at that time co-proprietor of Midnight Books in Sidmouth, Devon.

Frances received Vodka as a Christmas present from her mother in 1980 when he was just a few weeks old, and she soon discovered that her delightful feline friend had six toes on each paw. Throughout the 13 years of his life, Vodka was very fond of climbing trees, an activity that would surely benefit from the bonus of having extra toes.

Vodka possessed 24 toes in total, but the current record for the greatest number exhibited by a polydactylous cat has apparently been held since the early 1970s by an extraordinary tom memorably named Mickey Mouse, and owned by Renee Delgade of Westlake Village, California. In October 1974, a report revealed that Mickey had eight toes on each paw, yielding an astonishing count of 32 in total. 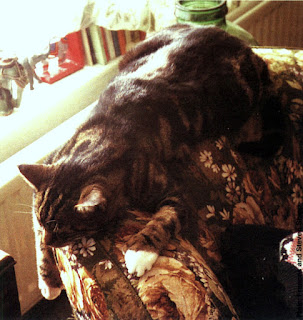 A polydactylous cat of very notable prominence was a grey-furred six-toed tom called Slippers, who was owned by none other than President Theodore Roosevelt of the United States. Yet Slippers gained feline immortality not through any colossal toe count. Instead, he chose simply to take a siesta one day stretched right across a rug occupying the entire floor space of a certain corridor in the White House - at the very time that a dignified procession of top-level diplomats, including a renowned ambassador's wife escorted by the president, was making its way down this same corridor!

Wars have been initiated over far less than the deliberate obstruction of such a glittering assemblage's movements – but in Slipper's case, feline felicity evidently prevailed. For with great deference and care in order to avoid disturbing his slumber, every member of the procession stepped very delicately around Slipper's reposing form, after which this eminent ensemble of some of the world's most important political figures continued its ceremonious passage down the corridor. A cat may indeed look at a king – or, in this particular instance, divert a diplomat or two!

President Roosevelt was not the only famous owner of a polydactylous cat. Author Ernest Hemingway owned several at his mansion in Key West, Florida. The very first was presented to him by a sea captain who believed that the presence of such animals on board brought good luck. Indeed, so closely linked did Hemingway's name eventually become with polydactylous cats that 'Hemingway cat' has become a widely-used common name for these extra-toed domestic felids. 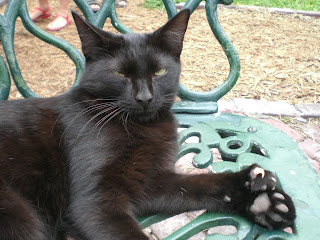 One of the many polydactylous cats living on Ernest Hemingway's Key West estate; photo snapped by Marc Averette on 10 February 2007 (© Marc Averette/Wikipedia – CC BY 3.0 licence)

Although feline polydactyly has been well documented from domestic cats, it is not so widely known that a few examples are also on record from their larger, wild brethren. In 1925, for instance, the Maharaj Kumar Shree Vijayarajji of Cutch in India published a photograph in the Journal of the Bombay Natural History Society depicting a leopard Panthera pardus with an extra claw-bearing toe on each hind paw.

Several years earlier, this same journal had carried a letter by S. Eardley-Wilmot referring to a leopard shot by him in Oude, which had sported five fully-developed toes and claws on each hind paw. And in 1946, the journal published a letter by Virbhadrasinh, H.H. Maharana of Lunawada, who had lately bagged a leopard with an extra fully-functional retractile claw on each of its hind paws.

These reports are particularly interesting, because in stark contrast to the polydactylous condition recorded from domestic cats, it would appear that in the leopard this teratological trait can be wholly restricted to the hind paws (thereby indicating that a different mutant allele is responsible). 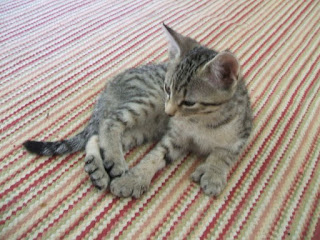 The last word on feline polydactyly, however, must surely be left to the following couple of truly exceptional examples:

One of these was a singularly special queen called Triple, born on 5 March 1976 and owned by Mr and Mrs Bertram Bobnock of Iron River, Michigan. As noted in Gerald Wood's Guinness Book of Pet Records (1984), Triple had no less than 30 toes – but this is not too surprising. After all, she did have five legs...and six paws! The other example was a male polydactylous orange tabby named Gizmo, who sported two paws on each of his front limbs, with each of these four paws possessing 4 toes, plus 7 toes on each of his two hind paws, thereby yielding a grand total of 30 toes!

And be sure to click here to read a ShukerNature article devoted to polydactylous ('horned') horses! 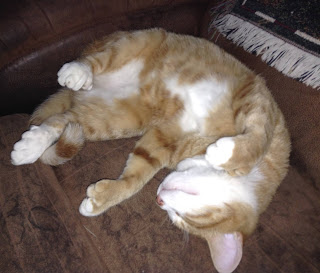 A photograph of Gizmo snapped by his owner in April 2017, revealing his extraordinary toe (and paw!) count (© Watching 4 Jesus/Wikipedia – CC BY-SA 4.0 licence)
Posted by Dr Karl Shuker at 15:59