DOL HAREUBANG AND HAETAE - A COUPLE OF KOREAN CURIOSITIES

What is the identity of this small but heavy, dimple-surfaced statuette that I purchased many years ago in an English charity shop? Only recently did I find out – and was most surprised by what it proved to be, so be sure to check out my ShukerNature article here to discover its most interesting, unexpected identity! (© Dr Karl Shuker)

Throughout my far-flung travels overseas down through the decades, whenever I've brought some mementoes back home afterwards I've always attempted to choose items of direct cultural relevance to the country or countries that I've visited, as opposed to more generic souvenirs. Equally, when perusing items at collector's fairs, markets, car boot sales, etc, I've always been drawn to unusual, distinctive ethnic items, especially if their country of origin is, at least at the time of my purchasing them, unknown not only to the purveyor but also to me – thereby encouraging me to conduct some detective work in order to uncover their nature and provenance.

So it was with the enigmatic little statuette whose photograph opens this present ShukerNature article of mine, and which I purchased at least 15 years ago at a charity shop in the English city of Wolverhampton. Standing just a few inches tall, it is made of black stone and is surprisingly heavy for its small size, with a very distinctive multi-dimpled surface, long ears (somewhat like Easter Island's giant moai), and very large bulging eyes.

Yet in spite of its singular appearance, and despite my making a number of attempts to discover something about it, all of my investigations met with failure. Consequently, I had no idea at all where this curious carving had originated or which entity it is meant to represent – until 2021, that is. For in April of this year, after reposting a photograph of it on my Facebook timeline (I'd first posted the same photo there six years earlier, back in April 2015, but it had not elicited any positive response from anyone), I received the long-awaited answer to this longstanding mystery. One of my quizzing friends and fellow West Midlander, Neil Russell, was able to identify my puzzling little figurine for me.

It is a dol hareubang, a stone statuette of the guardian deities of Jeju Island, off southern South Korea, carved from porous basaltic (volcanic) rock, and placed outside gates to offer both protection from interdimensional demons and fertility. Awesome!! Mine is only very small, clearly created as a souvenir of South Korea, but the originals on Jeju are up to 10 ft tall. Thanks Neil! 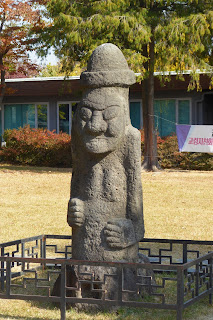 Following the belated success in discovering via Neil the identity and provenance of my previously perplexing statuette, I was duly reminded of a previous Korean curiosity that had formerly mystified me for some years. It too was a statue, albeit a much bigger one this time and one that was not owned by me.

Amid my archives of mystery beast data collected online is a public domain photograph depicting a very large stone statue of an extremely eyecatching legendary beast, but one whose identity had long been unknown to me. This was because (most unusually for me!) I had somehow failed to record any details concerning it – no name, no provenance, nothing at all, in fact, except for its photo's public domain status. The beast itself looked vaguely similar to China's famous Dogs of Fo, but was sufficiently distinct for me to feel sure that it would prove to be a legendary entity in its own right – and sure enough, it was.

In the past, I'd carried out a number of reverse picture searches, in the hope of discovering a website containing the mysterious photograph, but all had met with failure – until I conducted yet another such search in 2010 while preparing my book Karl Shuker's Alien Zoo: From the Pages of Fortean Times. And this time – success! It turned up on a Wikipedia page devoted to a Chinese mythical creature known as a xiezhi, but the entity in the photograph that I was interested in was not a xiezhi per se, but rather a Korean equivalent of sorts, known as a haetae, with the photograph depicting a haetae statue in the grounds of a Korean palace.

And here is that photograph: 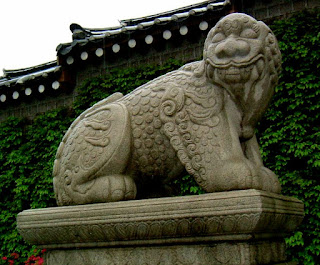 Never having visited the Korean peninsula, I've not seen haetae statues in the flesh – or stone, to be precise! However, it would appear that as the haetae is deemed there to be a guardian beast and in particular a valued protector against natural disasters such as earthquakes and fires, it is represented by statues in a number of significant sites in South Korea. Moreover, it has been the official symbol of Seoul itself since 2009.

Both canine and leonine in shape, the haetae sports a pair of very sizeable upper fangs more in keeping with a sabre-tooth than either a dog or a lion – and unlike any form of known canid or felid, this muscular mammal eats fire and is covered in sharp scales. In some representations, it also bears a small central horn upon its brow like that of a very short-horned unicorn, and a bell hangs upon a ribbon around its neck. Furthermore, it is supposedly able to travel back and forth through time, to distinguish between right and wrong so that it punishes wrongdoers without mercy, to bite the moon if so desiring (thus explaining the latter's waning period), and even to cause an eclipse.

According to ancient Korean tradition, this immensely powerful creature is native to the frontiers of Manchuria and appeared as a city-protecting entity in architectural sculpture during the early Joseon dynasty (the last dynastic kingdom of Korea, lasting for five centuries, from July 1392 to October 1897).

So if ever I'm fortunate enough to visit the Korean peninsula one day, I'll be sure to say a very respectful hello to its exceedingly formidable fire-eating lion dog (or dog lion) – aka the moon-munching, time-travelling haetae! 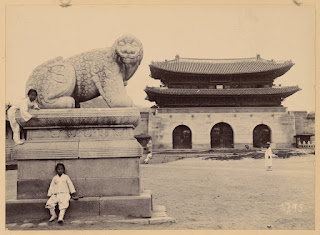 Second photograph of a haetae statue = this is one of a pair, in front of the reconstructed South Gate of Kyongbok Palace, in Seoul, South Korea, guarding it against fire; photo snapped in c.1900 (photo source: Cornell University Library – no publishing restrictions)
Posted by Dr Karl Shuker at 03:27