WOLVES OF THE WEIRD - WELCOME TO MY NEW BLOG, SHUKERNATURE! 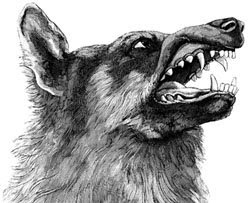 After long resisting the temptation to enter the frenzied if fascinating world of blogging, I've finally given in to the inevitable. So here, maintaining the unofficial CFZ theme of the week, is my contribution to the "Wolves of the Weird".

My Italian correspondent Igor Festari recently brought the following intriguing snippet to my attention. In Guide des Mammifères d'Europe, d'Afrique du Nord et du Moyen-Orient by Aulagnier et al (Delachaux & Niestle, 2008), a tantalising paragraph states that certain authors consider the big jackals of eastern Egypt not to be jackals at all but, instead, deem them to be little wolves (presently unknown west of the Sinai peninsula), though beware misidentification with free-roaming domestic dogs. Could these enigmatic canids represent a new wolf subspecies, or unknown population, or range extension? A similar situation once existed in Hungary.

As documented in my book Extraordinary Animals Revisited (CFZ Press, 2007), this eastern European country was formerly home to a mysterious wild canid known as the reedwolf. Some authors believed it to be a small but genuine lupine form, others opined that it was a jackal. Sadly, it now seems to be extinct, but museum specimens exist, and even today a degree of controversy remains in relation to its taxonomic status.

Almost two years to the day from when I posted the above account, my very first ShukerNature blog article, it was announced that yes, Egypt's so-called jackals are indeed wolves after all. Here is what I wrote about this exciting discovery in my Alien Zoo column for the April 2011 issue of Fortean Times:

AN IDENTITY CRISIS FOR ANUBIS? One of the most familiar members of ancient Egypt’s pantheon of gods is Anubis, the deity of mummification. For untold ages, Anubis has always been referred to as jackal-headed, on account of being portrayed with a canine head traditionally identified as that of Egypt’s jackal. However, this tradition has now come to a very abrupt end, thanks to the remarkable discovery that Egypt’s jackal is nothing of the sort. Genetic research by a team of researchers led by Dr Eli Rueness has revealed that it is in fact a hitherto-unrecognised form of the grey wolf Canis lupus. As such, it is, therefore, the only form of wolf native to the continent of Africa, has been duly dubbed the African wolf, and is most closely related to the Himalayan wolf. This in turn means that from now on, Anubis should be referred to not as jackal-headed but as wolf-headed.
http://news.mongabay.com/2011/0126-hance_africanwolf.html 26 January 2011.

In July 2015, Dr Klaus-Peter Koepfli and a team of co-researchers verified in a Current Biology paper that the Egyptian jackal was definitely a wolf, having analysed "extensive genomic data including mitochondrial genome sequences, sequences from 20 autosomal loci (17 introns and 3 exon segments), microsatellite loci, X- and Y-linked zinc-finger protein gene (ZFX and ZFY) sequences, and whole-genome nuclear sequences in African and Eurasian golden jackals and gray wolves". Their results revealed that the African wolf had split from the golden jackal more than 1 million years ago, and therefore deserved formal recognition as a separate species in its own right, for which they have proposed the official scientific binomial name Canis anthus ('golden dog' or 'golden wolf').

Posted by CFZ: Cryptozoology Online at 23:40