SCHREBER'S CAT OF MANY COLOURS. 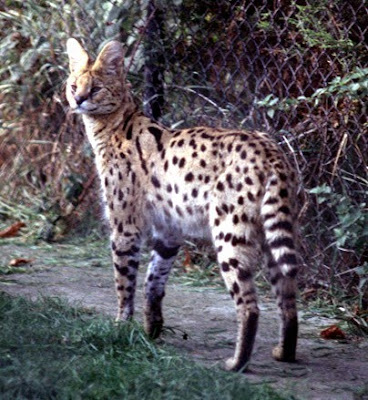 In zoological parlance, a morph is defined as one of two or more physically (but not taxonomically) different forms of individual exhibited by a given species. For example, the black panther is a melanistic morph of the leopard Panthera pardus. Having said that, some morphs of certain feline species appear so different from one another on first sight that in days gone by they were rigorously classified as wholly distinct species in their own right.

SERVAL AND SERVALINE - OR, SPOTS VERSUS SPECKLES

The serval and the servaline are a case in point. Formally christened Leptailurus [=Felis] serval in 1776 by Carl Schreber, the serval is a distinctive species of medium-sized African wild cat with noticeably big ears, long limbs, and a tawny-yellow coat handsomely marked with large black blotches and polka dots. Native to much of tropical Africa except for the closed rainforests of Central and West Africa, it is most commonly encountered in open country, particularly dry savannahs and steppe.

In 1839, however, English zoologist W. Ogilby documented what he considered to be a second, totally discrete species of serval, native to the moist savannah zone encircling the jungles of Sierra Leone, Guinea, and elsewhere in western Africa. He named it Felis servalina, and it thus became known as the servaline and also, very appropriately, as the small-spotted serval. Eschewing the serval's large blotches and polka dots, the servaline's coat was flecked with a dusting of only the finest, tiniest dots, so that when viewed from any distance the animal seemed to be almost uniform in colour, without any evident patterning.

In later years, the servaline's taxonomic status became a perennial topic for dispute within scientific circles. Some figures, such as Professors Bocage and St George Mivart, and Richard Lydekker (all respected zoological authorities in the 1800s), as well as the eminent 20th Century United States mammalogist Dr J.A. Allen, were convinced of its separate standing. According to Allen, a series of serval and servaline pelts collected in what is now the Democratic Congo and housed at the American Museum of Natural History could be readily sorted into two discrete types - large-spotted (servals) and small-flecked (servalines) - with no intermediates.

There were other experts, conversely, such as Drs D.G. Elliot and Philip L. Sclater (a onetime Secretary of the Zoological Society of London), who adamantly refused to accept the servaline as a legitimate species - and were ultimately vindicated for their scepticism.

In 1915, a tribesman from Sierra Leone brought to attention two kittens, one a serval and the other a servaline, that he claimed were from the same litter - but as his claim was not substantiated by independent testimony, Allen would not accept it as scientific evidence. Some years later, however, Colonel C.R.S. Pitman, a Ugandan game warden with a longstanding interest in mysterious, controversial African animals, examined a sizeable collection of serval and servaline pelts while conducting a faunal survey in Northern Rhodesia (now Zambia), and was startled to find that they could be arranged in a sequence that produced a continuous intergradation of coat patterns conclusively linking the serval and servaline to one another.

In other words, the 'serval' and the 'servaline' were nothing more than names for the opposite ends of a spectrum of coat patterns exhibited by a single species. Pitman duly sent a selection of these significant pelts to London's Natural History Museum, and the servaline accordingly vanished from the list of feline species accepted by modern-day science. Intriguingly, exotic jet-black servals are often sighted in mountainous localities, including the Aberdares in Kenya and Mount Kilimanjaro - truly a cat of many colours!

WHEN GOLD TURNS TO SILVER - LITERALLY! 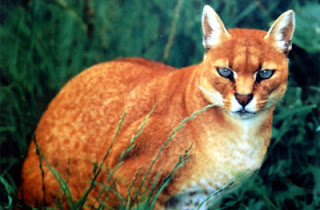 With handsome golden-brown fur, the African golden cat Profelis [=Felis] aurata, seen here, was one of two closely related but ostensibly separate species of cat named from this continent in 1827 by Dutch zoologist Professor C.J. Temminck. The second was the silver cat F. celidogaster (also known as the grey cat).

As with the serval and servaline, zoological opinion during the 19th Century concerning whether or not the golden cat and silver cat were taxonomically distinct from one another was split - until the truth was finally exposed in a singularly memorable manner at London Zoo. In June 1906, a golden cat arrived at the zoo sporting its species' typical foxy-rufous coat colour - only to moult its fur during the next four months and replace it with the steely-coloured pelt characterising the silver cat! Thus ended the taxonomic tribulations surrounding another dimorphic denizen of the Dark Continent.

Not to be outdone, however, for a long time the African golden cat's Asian relative, nowadays known as Temminck's golden cat Felis [=Catopuma] temminckii, posed an even trickier dilemma for science. The intricate coat markings of one of its subspecies, a large Burmese and Tibetan version known as Fontainier's cat F. t. tristis, are deceptively similar to those of a totally separate species, the leopard cat Felis [=Prionailurus] bengalensis - so much so that some zoologists were once in favour of classifying Fontainier's cat as a leopard cat subspecies instead!

And in South America, the red morph of the grey-furred jaguarundi Felis [=Puma] yagouaroundi was initially deemed to be a valid species, termed the eyra F. eyra.

Never judge a book by its cover - or a cat by its coat, it would seem!
Posted by CFZ: Cryptozoology Online at 10:49