THE SINISTER SHADHAHVAR - PERSIA'S UNICORN SIREN OF THE SANDS. 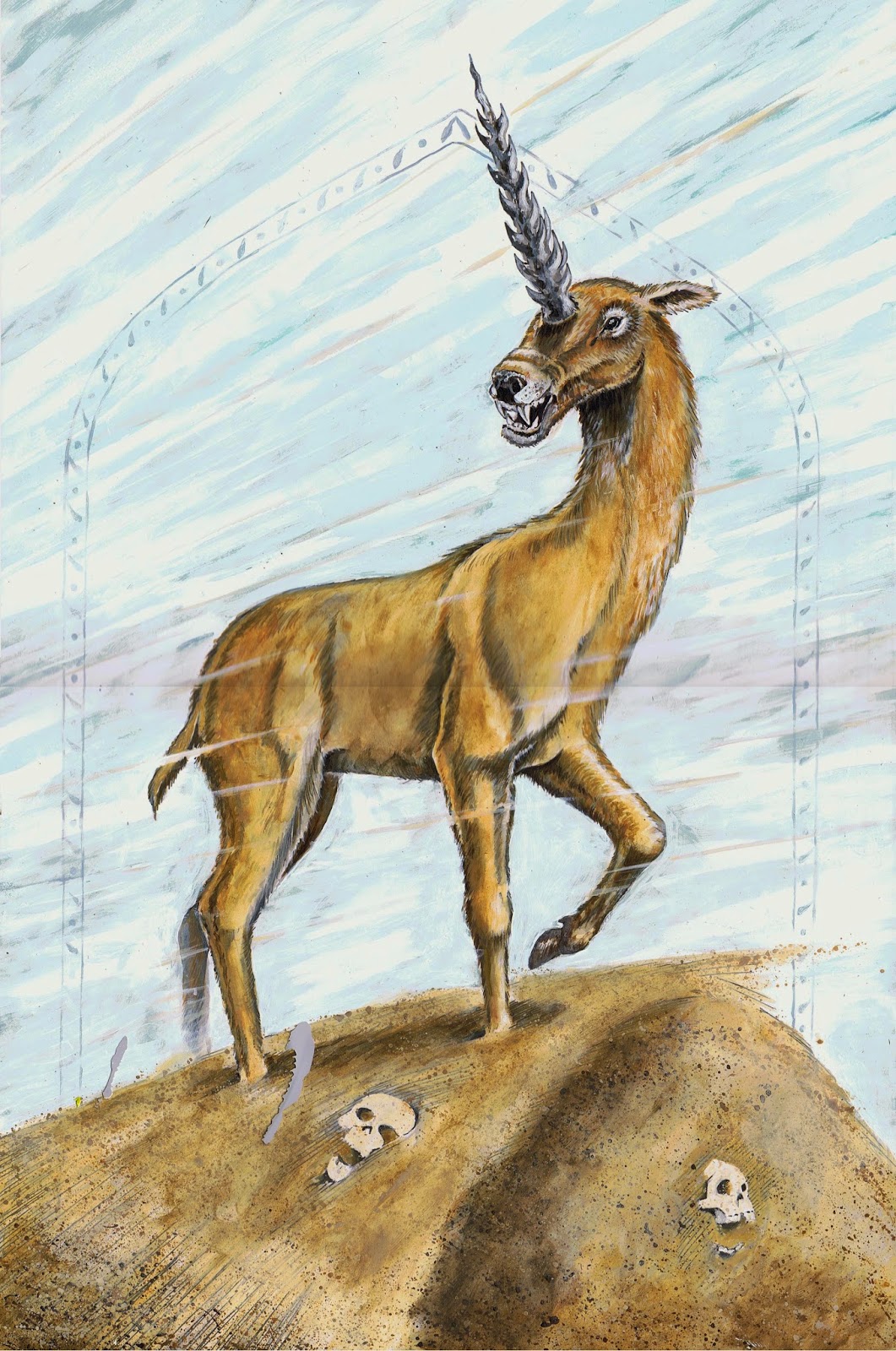 And now, as they often said on 'Monty Python's Flying Circus', for something completely different. Some of you may know that I have been working for quite a time on a companion volume to my bestselling dragons book, Dragons: A Natural History (1995). This time, however, the subject is not the dragon, but the unicorn, surveying its surprisingly numerous varieties and retelling some of its most famous, and also certain much less familiar, legends and folktales. Now, here for the very first time anywhere, I am presenting as a CFZ world-exclusive an excerpt from my unicorns book, unveiling the deadly Persian shadhahvar. I hope you enjoy it.

THE SINISTER SHADHAHVAR –
PERSIA'S UNICORN SIREN OF THE SANDS.

An excerpt From Chapter 2 of my in-progress book Unicorns: A Natural History.

Despite the unicorn's popular image as a benevolent, pure-spirited creature, not all of its kin are so benign. Some are decidedly sinister, but perhaps the deadliest of all is the deceptive shadhahvar of Persia - an exotic Pied Piper of the unicorn world, whose gentle demeanour veils a bloodthirsty, malevolent beast waiting to lure the unsuspecting to their doom...

He had been lost for days in the featureless, seemingly endless Persian desert, with scarcely any food or water left, so it would be little wonder if he were indeed beginning to hallucinate. How else could the lone traveller, roaming far from his European homeland, explain what he was now hearing? From nowhere, the hot desert air had suddenly filled with the strains of glorious music, as if the very wind itself were a celestial flautist, piping dulcet melodies that caressed and calmed, lured and lulled, sang and soothed, as the weary traveller stumbled onwards. They reminded him of the zephyr-murmured refrains that would drift from the Aeolian harps in his boyhood village. Yet the rapturous harmonies that now encompassed him were infinitely sweeter and stronger - and more mysterious.

Then, abruptly, the traveller saw something that dispelled even the enigma of this phantom sonata far from his mind - for just ahead, its neck bowed down gracefully as it drank from a clear, sparkling pool of water in a small oasis, stood an extraordinary creature. In general outline, it resembled a deer, but as he watched, the creature raised its head and looked at him - and to the traveller's amazement, he realised that it was a unicorn! There, set like a precious stone in the centre of its brow, was a long slender horn!

As he looked closer, however, the traveller saw that it was no ordinary horn, and no ordinary unicorn - if such a magical beast as a unicorn could ever be called ordinary. Long ago, he had once briefly spied a unicorn in the forests near his home - a creamy-white steed with a shimmering, spiralled horn upon which shafts of sunlight danced like a bright animate rainbow. In contrast, the creature standing before him now was pale brown, matching the sandy hue of the undulating dunes on every side, was deer-like rather than horse-like, and its horn was even more marvellous than that of the unicorn he had previously seen.

Eschewing the typical undivided horn of Western unicorns, it bore no less than 42 slender hollow branches, radiating upwards on every side, silver in colour and each perforated with tiny holes. And it was the blustery desert wind blowing through this incredible structure that was engendering the miraculous melodies still surging all around him! Here, more tangible but also more unearthly than any mirage, was a veritable siren of the sands - in the form of an exotic neo-unicorn!

Thoroughly enchanted by these hypnotic sounds and by the majestic sight of the uncanny desert unicorn, the traveller moved closer, desperately anxious to learn more about this ethereal beast. And as he did so, the symphony emerging from its horn grew even louder, its sonorous music filling his brain with such wonderful visions that he was deafened and blinded to all thoughts of caution and possible danger. In any case, what danger could there be from this captivating creature, which gazed at him so innocently, willing him to draw closer, as it stood unafraid. Soon he was standing before the appealing, passive beast, and as its seductive harmonies swirled around his head he was close enough to see how fine the holes were that percolated the unicorn's horn, and how incredibly sharp the point of every branch was that diverged from the horn's central column.

Falling to his knees in awe, how blessed the traveller felt, to have encountered such a glorious entity, and to have listened to its heavenly rhapsodies. Now he knew how sailors must have felt who had encountered the bewitching lorelei singing from her rock above the River Rhine, or the sweet-voiced original sirens - half-woman, half-bird - of ancient Greece. But even as he smiled in rapt delight at such thoughts, up from the depths of his unconscious mind, straining to be heard above the enveloping refrains of the unicorn's music, came a single tremor of alarm, a solitary dissonant note momentarily stilling the mellifluous harmonies that by now had all but smothered his conscious mind. Beware! Remember what happened to those lulled by the lorelei's alluring song and the dulcet strains of the sirens! Death! Theirs is the mesmerising music of Death!

Shocked out of his melody-drugged reverie, the traveller's head jerked up, and his eyes met those of the desert unicorn - or shadhahvar, as it is known in this land. But instead of seeing the soft, loving eyes of the magical creature that he had spied in the forest back home all those years ago, he found himself staring into a pair of fiery pits in which the acrid scarlet flames of evil danced and laughed at his horrified gaze. He drew back, and saw a hideous, mocking leer flit briefly across the lips of the shadhahvar as they rolled back to reveal a series of savage predatory fangs.

The traveller screamed in fear - but it was too late. Even as he backed away further, stumbling in his terror, the shadhahvar lowered its head, lunged forward - and impaled the hapless traveller upon its deadly horn, its many branches spearing every portion of his body. After a few moments, it shook its head violently, the gored bloodstained body of the dead man fell off its horn onto the sand, and the hungry shadhahvar rapidly devoured his corpse, tearing it to shreds with its long sharp fangs.

Eventually, the shadhahvar moved away, ready to seek out a new victim elsewhere, leaving behind only a whitened human skeleton to be swiftly buried by the ever-shifting desert sands. Nothing remained as testimony of the terrible event that had lately transpired here - nothing except a single spot of blood, which spread out over a patch of sand like the petals of a crimson rose. But who has ever encountered a rose in the desert - that would be as unlikely as a siren of the sands...wouldn't it? 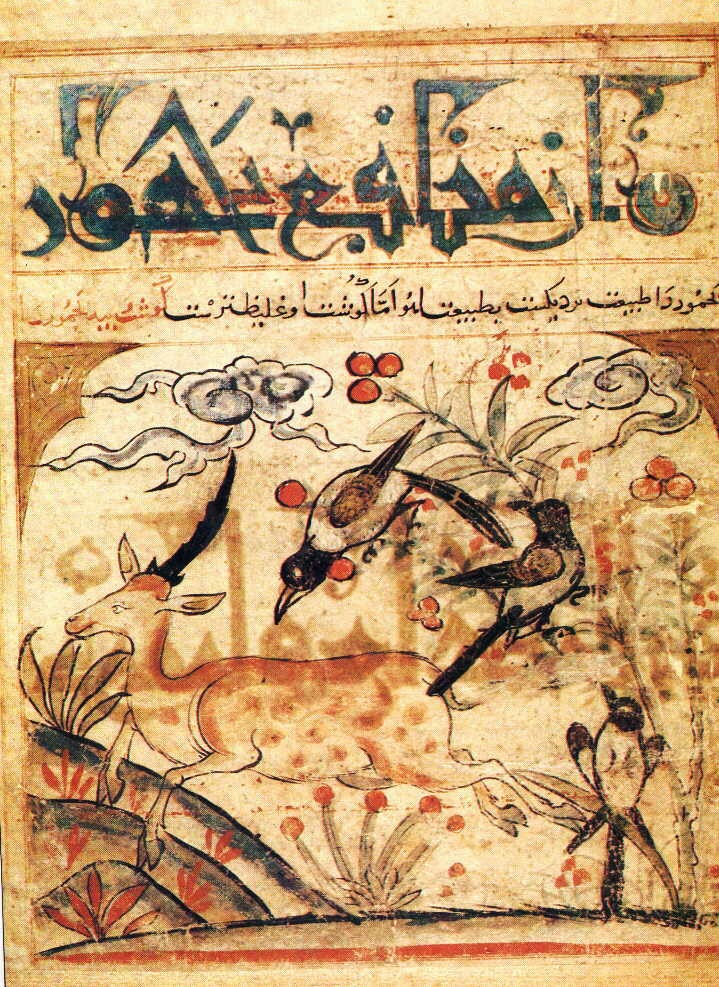 Early Persian depiction of the shadhahvar

Posted by CFZ: Cryptozoology Online at 12:44