NUNDA - IN SEARCH OF THE STRANGE ONE 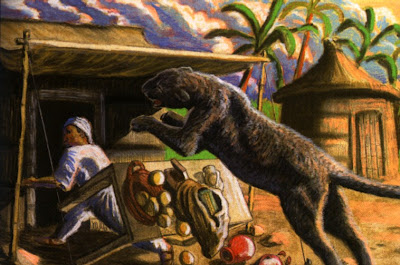 
There is an old, traditional Tanzanian folktale that tells of the Sultan Majnun's youngest son who went seeking a murderous feline monster called the nunda, which had killed his three brothers and many other hapless humans too. Evidently not the most zoologically-knowledgeable of people, he proceeded to kill several different animals, including a zebra, a rhinoceros, an elephant, a civet, and a giraffe, each time mistakenly assuming that this must be the nunda. Eventually, however, he encountered the real nunda, lying asleep under the shade of a tree. As large as a donkey, with distinctive brindled fur, huge claws, and enormous teeth, it was a terrifying sight, but the Sultan's son slew it as it slept, and returned home in triumph, having rid his father's kingdom of this malevolent scourge.

Reminiscent of the dragon-slaying tales popular in Europe, this is a quaint story - or it would be, if that indeed was all that it was. During the early 1920s and again in the 1930s, however, while acting as Native Magistrate at a small Tanzanian coastal village called Lindi, Captain William Hichens had good reason to think otherwise.

'Nunda' in Swahili translates as 'strange one', and according to the people of Lindi and elsewhere along the seaward edge of Tanzania, the feline monster of the above folk tale is no myth. Also known to them as the mngwa, and said to inhabit this country's temperate coastal forests, they readily distinguish it from both the lion and the leopard - the two known species of big cat inhabiting this region of Africa. Its footprints are very characteristic, resembling a leopard's in shape, but as large as a lion's. The nunda itself is also said to be as big as the biggest lions, with unmistakable greyish fur striped with tabby-like markings.

However, Hichens assumed the nunda was wholly legendary - until the following incident took place in 1922, recalled by him 5 years later in an article on African mystery beasts:

"It was the custom for native traders to leave their belongings in the village market every night, ready for the morning's trade; and to prevent theft and also to stop stray natives sleeping in the market-place, an askari or native constable took it in turns with two others to guard the market on a four-hour watch. Going to relieve the midnight watch, an oncoming native constable one night found his comrade missing. After a search he discovered him, terribly mutilated, underneath a stall. The man ran to his European officer, who went with me at once to the market. We found it obvious that the askari had been attacked and killed by some animal - a lion, it seemed. In the victim's hand was clenched a matted mass of greyish hair, such as would come out of a lion's mane were it grasped and torn in a violent fight. But in many years no lion had been known to come into the town."

Hichens was both shocked and greatly perplexed - but the people of Lindi were neither. They assured him that it was the work of a nunda, and an old native governor of the district confirmed that a nunda had carried out several other attacks here in the past. Moreover, shortly afterwards two men informed Hichens that they had been passing by the market on the night in question, and had been horrified to see an enormous brindled cat leap out of the shadows and pounce upon the unfortunate askari. But that was not the end of the matter.

A couple of nights later, a second askari met his death in the same manner, and in one of his clenched fists was found more of the strange, brindled grey fur. Over the next month, several further killings took place up and down the coast, but despite the local police force's best efforts, the perpetrator was never caught. During the 1930s, however, another, identical series of killings occurred in Hichens's district. One lucky survivor was an old, extremely experienced hunter, to whom lions and leopards were very familiar beasts. He stated adamantly that his attacker had been neither of these, but had instead been a nunda. 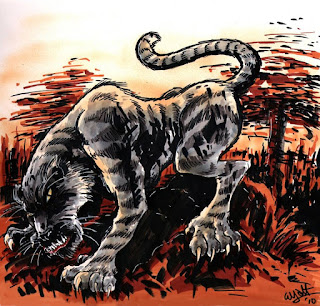 Apart from Hichens, another Westerner with experience of the nunda was Patrick Bowen, who obtained some fur left behind by this feline assassin after it had made off with a human victim. He also observed its footprints, which were indeed huge. So what could it be?

Four explanations come to mind. The first, and least zoological, of these is that there was no feline nunda, certainly as far as the Lindi killings documented here were concerned. The following information, quoted from Wild Cats of the World (2002) by Mel and Fiona Sunquist, may have significant bearing upon this:

"...witch doctors in the Singida area, in what was at that time Tanganyika [now Tanzania], ran a lucrative extortion business in the early twentieth century by threatening to turn themselves into lions and kill people who did not pay them. Many people were murdered by young men dressed as lions, wearing lion paws as gloves on their hands and feet. These mjobo, or "lion men," reappeared in the same area in 1946, some twenty-five years later, and 103 deaths were attributed to their activities. Murders were made to look like the work of man-killing lions, and the common belief in were-lions was exploited by secret societies."

Could it be that the Lindi killings were also the work of these lion men? The timings are similar – two separate outbreaks, one during the early 20th Century and a second over a decade later. Claims that the killings resembled maulings from some great cat are also consistent with this theory, and what better way to increase fear among the highly superstitious local people than to spread rumours that the assailant was not even a lion but rather a greatly-feared mythical feline monster – the nunda? And to provide physical evidence for this claim, what easier way than to place clumps of grey fur in the hands of the murder victims, fur that was clearly not from a lion but matched the folklore descriptions of the nunda? In reality, of course, the fur could have originated from anything, even a domestic dog, but as long as it didn't look like a lion's and did look like the fabled nunda's, that was all that was required of it. Even the extra-large footprints would not be beyond the ingenuity of the lion-men to fake, thereby yielding further evidence of nunda presence in the eyes of the frightened locals. Consequently, although I don't entirely deny the reality of the nunda, I do consider this particular explanation the most plausible for the two outbreaks of nunda-attributed Lindi killings.


Assuming that the nunda does indeed exist, however, three other options exist. Firstly, it may conceivably be a wholly unknown species, lurking undetected by science amid Tanzania's dense forests.


Secondly, it could be an exceptionally large form of aberrantly-patterned leopard. Striped leopards have been recorded in the past, and the nunda's footprints do resemble a leopard's, except for their larger size. Having said that, however, the concept of a ferocious lion-sized leopard is not a very comforting one, to say the least!


Thirdly, and perhaps most intriguing of all, is the identity put forward by veteran cryptozoologist Dr Bernard Heuvelmans. He has suggested that the nunda may be an undiscovered giant version of the African golden cat Caracal (=Profelis) aurata. Normally measuring up to 4.5 ft in total length, and native to East as well as West Africa, this is not only one of Africa's most elusive but also one of its most morphologically versatile species of cat. Its pelage can vary in colour from gold, through a wide range of reds, browns, and greys, to a melanistic all-black form, and superimposed upon this diverse range of background colours there can sometimes be an equally broad spectrum of dark spotted patterns too. 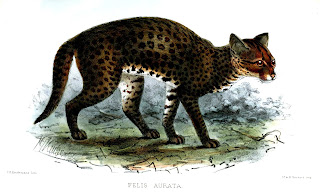 Consequently, as argued by Heuvelmans, of all the known feline species native to Africa, it is the golden cat that offers the greatest likelihood of yielding the brindled grey-hued pelage characterising the nunda. In addition, despite being only a medium-sized cat, the golden cat inspires extraordinary fear and tribal superstition throughout its wide distribution range, on account of its extremely savage, bloodthirsty nature. Also of note: eyewitnesses have claimed that despite its huge size, the nunda does not roar like a lion or leopard, but purrs, just like an overgrown domestic cat. And the throat structure of the golden cat is such that it does indeed purr (which lions and leopards cannot), rather than roar.


So what would a golden cat be like if increased in size to the stature of a lion (or at least to that of a leopard, thus allowing for a degree of fear-induced exaggeration by those who have encountered such a creature), and bestowed with a brindled grey pelage? Perhaps we already know the answer to this question - and perhaps that answer is the nunda...

Further information concerning the nunda and other African mystery cats can be found in my books Mystery Cats of the World and Cats of Magic, Mythology, and Mystery. 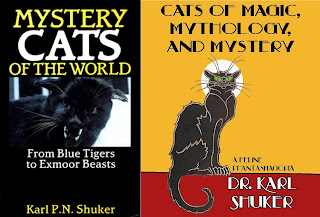