THE GIANT MOLE OF MESTY CROFT 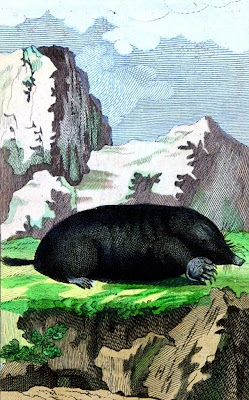 People often claim that objects, buildings, animals, etc seemed much bigger when viewed as a child than they do now when viewed as an adult. Yet I can’t say that I’ve ever noticed this, personally speaking. Everything that I can recall from childhood and which still exists in unchanged form today looks just the same to me now as it did then – which is why I cannot use this notion as an explanation for the giant mole of Mesty Croft.

Between the ages of seven and eleven (i.e. during the late 1960s), I attended Mesty Croft Junior School in Wednesbury, West Midlands, and whereas for many other erstwhile pupils of this fine establishment their abiding memories may well be of childhood classmates or even of teachers whom they liked or disliked, my most tenacious recollection of Mesty Croft is an extraordinary exhibit – one that fascinated me throughout my time there, and which I secretly coveted for what I now realise to be reasons of slowly-awakening cryptozoological awareness.

The exhibit was a taxiderm mole, mounted on a wooden plinth, and placed on a shelf beneath a window in the main assembly hall. For a child who hoarded dead insects in matchboxes, enjoyed birdwatching in the countryside at weekends, collected frogspawn and sticklebacks in jam jars, gathered up seashells off the shore on seaside holidays, and visited every major zoo in Britain, it is hardly surprising that I entertained daydreams of owning this wonderful item and displaying it in pride of place in my bedroom. However, thanks to a loving but responsible upbringing by parents who left me in no doubt about the evils of theft and other misdemeanours, a wistful daydream is all it ever remained.

It wasn’t until some time after leaving Mesty Croft that I saw other taxiderm moles, and was astonished at how small they were (no more than around 5 inches long at most) in comparison with the example that I had known so well at junior school, and which I now realise was almost as big as a rat in terms of body size (but with only a very short tail). Not only that, their fur was always velvety smooth, whereas the Mesty Croft giant mole’s was decidedly curly and much harsher, as I well remembered from having stroked it on a couple of occasions when walking by its shelf in the assembly hall.

Could it be that the latter specimen’s fur had deteriorated over the years since its pelt had originally been prepared by the taxidermist? Yet if so, a more likely outcome would surely have been fur loss, not increased curliness? And how can this mega-mole’s size be explained? Is it possible that it was not a specimen of the common mole Talpa europaea, but of some much larger, exotic species from outside Europe? Its fur was jet black in colour, whereas that of the common mole is more often dark grey, thus providing further support for the prospect that this was no ordinary British mole.

Today, the trail of Mesty Croft’s giant mole is so cold that there seems little hope that it can ever be thawed out. As far as I am aware, none of the teachers who were at Mesty Croft during my time there are still alive; and in less than a decade from when I left, the entire school was razed to the ground and later completely rebuilt in a totally new layout. So whatever happened to its mole of mystery? Was it simply discarded during this major upheaval, or did someone rescue it from such a cruel fate, so that somewhere out there it may still exist today - preserved in scientific anonymity, perhaps, on someone’s windowsill, bookshelf, or mantelpiece?

I appreciate that it is a very remote possibility, but if there is anyone reading this who can shed any light on the very curious case of the long-lost giant mole that once resided proudly on a shelf in Mesty Croft Junior School, Wednesbury, West Midlands, I’d very much like to hear from you.
Posted by Dr Karl Shuker at 21:16