What do you call a newly-found hairless mole-like creature from the Antarctic, with a heat-emitting bony plate on its brow for melting tunnels in the ice beneath unsuspecting penguins, which the creature can then seize and devour? A successful April Fool joke, that's what!
The story of the hot-headed naked ice borer, a 6-inch-long surprise recently revealed in the frozen southern continent, was featured in the April 1995 issue of the American science magazine Discover, and even included an impressive photo. Such a distinctive new species naturally attracted a lot of interest, and reports subsequently appeared in several other publications - until June 1995, that is, when Discover's editors triumphantly exposed the ice-borer as a spoof. In the true spirit of the event, however, the original Discover article had contained a quite obvious clue as to the ice-borer's real identity. The name of the wildlife biologist who had supposedly found it was given as Aprile Pazzo - Italian for 'April Fool'!

Even at the best of times, cryptozoology is perpetually on the lookout for frauds and hoaxes when assessing reports of mysterious animals. It must always be especially vigilant near the onset of the fourth month, however, because the unveiling of sensational new species is a perennially popular choice for an April Fool spoof. Some of them, moreover, have become classics in their field, like the following example.

In spring 1984, London Zoo received a wonderful new animal, which immediately became a popular star - and for good reason. How many animals can you think of that can perfectly mimic their human observers? Yet this remarkable creature, standing upright on its back legs, would wave when the crowd waved, and even clapped its front paws together when the crowd applauded. It resembled a shaggy bear, dark on top with a white chest, white toes, and a long white mandarin-like moustache that drooped down over its cheeks. According to the label on its enclosure, it was from an eastern Himalayan locality a few hundred miles north of Bangladesh, and the local people there called it a lir-pa loof. Zoologically, it was the only known member of a new mammalian family, and had been dubbed Eccevita mimicus.

The lir-pa loof generated an incredible amount of public interest. During the first week after its arrival, London Zoo received around 1000 telephone calls from people requesting further information about it, and the Natural History Museum and the BBC were similarly bombarded. When you're as famous as this, there is only one thing to do - make your television debut. And that is precisely what the lir-pa loof did - appearing with its keeper, George Callard, on the popular BBC show 'That's Life', hosted by Esther Rantzen.

By now, there were ample clues for exposing the secret of this creature (whose loose-fitting skin could so easily conceal a child or kneeling adult!). Spelled backwards, 'lir-pa loof' becomes 'april fool'. The date of its debut on 'That's Life' was April 1. And for the more classically-minded, the lir-pa loof's generic name, Eccevita, is Latin for 'That's life'.

Amazingly, however, there were still a surprising number of people who believed in the lir-pa loof's authenticity - until the very next 'That's Life' show. That featured the second (and final) appearance of this marvellous mammal and its keeper, singing "We apologise".

Animal April Fools come in many forms. Some are simple, slapstick fun, like Charlie the 'chickpanzee'. This genetically-engineered miracle combined the DNAs of a chicken and a tamarin monkey, and appeared in London's Daily Mirror newspaper on April 1 1991. More deceptive was George - a vicious crossbreed between a goldfish and a piranha but outwardly resembling true goldfishes. Photographed in the Daily Mail on April 1 1987, George appeared alongside his 12-year-old owner, Amanda Baker - nursing a bandaged finger. People who were not experienced fish fanciers probably didn't realise that piranhas and goldfish are far too distantly related to yield hybrid offspring, but the Daily Mail owned up on April 2 - enabling goldfish owners everywhere to breathe a sigh of relief again at feeding time.

On April 1 1989, London's Today newspaper included an amusing spoof concerning the arrival at London Zoo of a living sauropod-type dinosaur from Guinea - clearly inspired by real reports of the mokele-mbembe from the People's Republic of Congo. Also in 1989, the April 1 issue of Garden News featured a front-page special on the astounding germination of a prehistoric plant from fossilised dinosaur droppings. Aptly dubbed the dinosaur vine, it was being studied by Professor Adge Ufult - just say his name outloud!

Appropriately, however, the most famous cryptozoological April Fool involved the most famous cryptozoological creature - the Loch Ness monster. On April 1 1972, newspapers worldwide reported the astonishing discovery of a 9-ft-long seal-like beast, weighing over half a ton, that had been found dead at the side of the loch. Soon afterwards, police intercepted a van transporting the body south to Flamingo Zoo Park in Yorkshire.

When examined, it was found to be the carcase of a dead bull elephant seal, which had been deep-frozen for several days, giving it a peculiar greenish hue. Its whiskers had been shaved off too, and its cheeks had been stuffed with rocks.

On April 2, Flamingo Zoo Park's public relations officer, John Shields, confessed that it was an April Fool hoax, which he had secretly set up as a joke directed at the managing director of the company owning the zoo. Shields had used the body of an elephant seal that had died a week earlier at Dudley Zoo, owned by the same company.

Lastly, a modern-day online classic. On 1 April 2008, the nowpublic.com website published a news report by Bill Adler announcing the escape from Washington DC's National Zoo of a particularly rare creature known as the loof lirpa. Its photo revealed it to be a llama-like beast but sporting a pair of long slender gazelle-like horns. Native to Patagonia, it is further distinguished by its distinctive odour, likened to cheap cologne, and although usually a mild-mannered species, this particular individual, an adult male, had been ready to mate when it escaped and so may well be feeling aggressive. Needless to say, however, there was no need to be alarmed - as long as you took the trouble to notice which phrase this exotic animal's name spelt out if read backwards! 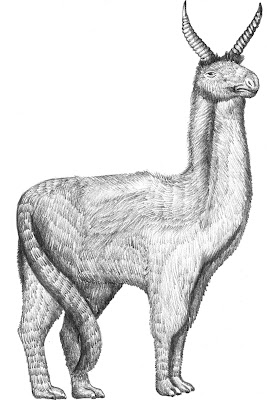