A UNICORN RABBIT FROM COUNTY DURHAM 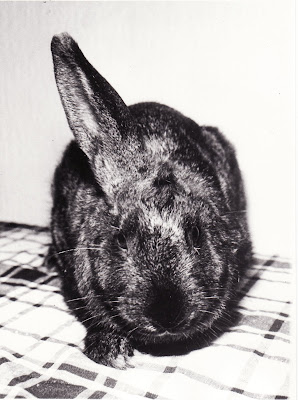 Last week, it was all about Frank and Louie - the record-breaking, 12-year-old Janus cat, a cat with two faces. This week, I have pleasure in introducing another furry wonder - a bona fide unicorn rabbit!

As someone passionately interested in unicorns, I have documented many different types over the years, ranging from the familiar equine version to rather more exotic counterparts - including a lethal carnivorous desert-dweller with a musical flute-like horn, an ostensibly semi-aquatic form with webbed feet, an extremely bellicose bovine or even rhinocerine equivalent from Persia that could be soothed only by the calming cooing of a turtle dove, and a small hare-like but extremely malign entity from an unnamed tropical island. However, there is one particular example, which I investigated a fair few years ago but have never previously documented, that I find especially intriguing - for the simple reason that whereas most unicorns of whatever type they may be are fictitious, this one was real.

On 29 September 1982, writer Paul Screeton at the Hartlepool Mail published a report (subsequently picked up by other media sources, and also reproduced in his own magazine, The Shaman – see photo) documenting a most extraordinary pet rabbit that its owner, 9-year-old Kathy Lister of Trimdon Grange in County Durham, England, had very aptly named Unicorn. Due to a genetic fluke, Unicorn had been born with just a single ear. Yet whereas there are numerous reports on file of individual mammals of many different species in which one or other ear is missing, Unicorn’s condition was rather more special. For unlike typical one-eared individuals, her single ear was not laterally positioned, but arose instead from the centre of her head, standing upright like a long furry horn! 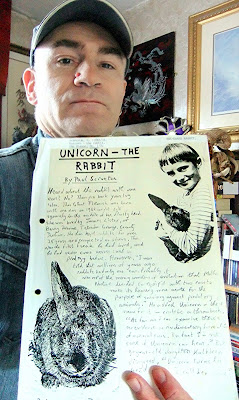 Intrigued by this highly unusual condition (even today, I have never encountered any additional ‘median-ear’ instances), I decided to pursue the case personally. So after first discussing it with Paul Screeton, in July 1988 I contacted Kathy (then aged 15) and her father James, requesting further details, and am most grateful for the following information that they very kindly sent to me.

Born in spring 1981, Unicorn was a Flemish Giant doe bred on James’s farm, and she subsequently became the much-loved pet of his daughter Kathy. In more than 35 years of rabbit breeding, this was the only one-eared rabbit that James had ever observed. In autumn 1984, Unicorn escaped from her pen, but three days later she was found, recaptured, and placed in a new hutch. Over the next month, she grew steadily fatter, and 31 days after her original escape Unicorn gave birth to a litter of five offspring. As she had never been introduced to any of the farm rabbits, it is clear, therefore, that during her brief period of freedom Unicorn had encountered and mated with a wild rabbit.

Of her five offspring, four were normal, but the fifth displayed its mother’s remarkable median-ear condition. Regrettably, however, all five offspring died shortly afterwards during a very severe thunderstorm, so no details of their sex are known. Happily, Unicorn survived, and lived for a further two years, but she did not give birth to any further litters, so the unidentified mutant gene presumably responsible for her median ear and that of one of her offspring was lost forever when she died in November 1986.

Judging from the 4:1 normal:mutant ratio of offspring, it is likely that the median-ear condition was induced by a recessive allele (gene form), and that Unicorn was homozygous for it (i.e. possessing two copies), thereby enabling the condition to be expressed by her. If so, then it must also be assumed that her wild mate was at least heterozygous (possessing one copy) for this same mutant allele, in order to explain the birth of the single median-eared offspring in her litter. Yet if this mutant allele is indeed present in the wild population, one might have expected it to have been expressed far more frequently (especially in animals that are famous for breeding...well, like rabbits!). Could it, therefore, be associated with some debilitating trait too, so that individuals expressing it are more vulnerable in some way to predation?

The most obvious affliction to be expected that may prove detrimental to survival in the wild is some form of hearing impairment – an occurrence that normally accompanies most ear-related mutations. Yet Kathy had observed that when Unicorn was called, she would turn towards the direction of the voice, thus suggesting that her hearing was not severely impeded (although by having only one ear, it meant – inevitably - that Unicorn’s hearing could only be monoaural, not stereo).

Tragically, however, in the absence of further litters from Unicorn upon which to base breeding observations, little more can be said of her apparently unique mutation. So it is likely that its identity will remain undiscovered, unless this remarkable ‘unicorn ear’ condition reappears one day in some other rabbit farm.

Thanks very much to Paul Screeton for kindly making available to me the photos included here.

Today, while browsing through the newly-published 2012 edition of Ripley's Believe It Or Not, I discovered a second unicorn rabbit. Owned by rabbit breeder Franz-Xaver Noemmer, from Egglham, Germany, it was born in February 2010, and has snow-white fur.

This post is extracted from The Anomalarium of Doctor Shuker, one of my current books-in-progress.
Posted by Dr Karl Shuker at 21:22