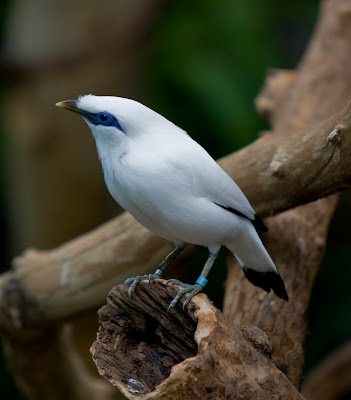 Continuing my series of ShukerNature posts concerning species featuring in my forthcoming book The Encyclopaedia of New and Rediscovered Animals that are celebrating major anniversaries in 2011, here's Bali's only endemic species of bird, which was discovered by science exactly 100 years ago.

On 24 March 1911, while participating in the second Freiburger expedition to the Moluccas, avian expert Dr Erwin Stresemann collected an adult female of a quite exquisite species of crested starling at Bubunan, on the northern coast of Bali. Except for the black edge to its tail and its black wing tips, its plumage was an immaculate snowy white. In contrast, its unfeathered legs and feet were pale grey, its bill was brownish-yellow, and a conspicuous patch of bright blue skin encircled each eye. A new species, related most closely to the mynahs, it was unique to Bali - moreover, it is this island's only endemic bird.

In 1912 it was officially described by Stresemann, who created a new genus for it, and named it Leucopsar rothschildi, as a token of his gratitude to Lord Rothschild for permitting him to spend such a considerable time during his ornithological researches at the magnificent natural history museum at Tring, founded and owned at that time by Rothschild.

The highly attractive appearance of Rothschild's mynah ensured its rapid rise to fame as a popular cage bird, but by being restricted to such a tiny island as Bali (no more than about 2000 square miles in area, of which only the Bubunan portion is inhabited by the mynahs) it is, unavoidably, a species with a small population size. As a result, the depletion of its numbers in the wild by local trappers supplying birds to zoos, aviculturalists, etc, ultimately transformed it into an endangered species – so much so that in 2001 the wild population had reached an all-time low of just six birds and is categorised as critically endangered by the IUCN.

Happily, however, it breeds well in captivity, enabling its numbers to be built up. At Jersey Zoo, for instance, 185 mynahs had been bred by mid-1990 from an original group of just four. Conservationists hope that captive-bred specimens released onto Bali will boost the wild population to its former level, before this mynah became a popular aviary species. 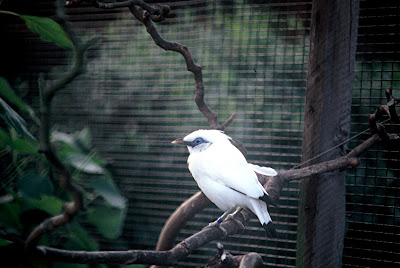