A CENTURY OF OWSTON'S BANDED CIVET 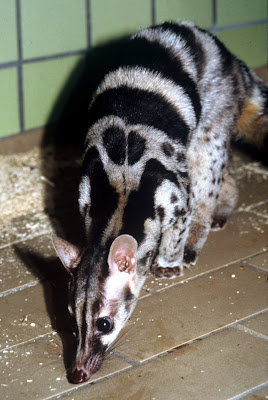 
To promote my soon-to-be-published Encyclopaedia of New and Rediscovered Animals - the fully-revised, thoroughly-updated, and greatly-expanded third incarnation of what began as The Lost Ark in 1993, and then became The New Zoo in 2002 - during the next few weeks I shall be excerpting from this latest book of mine as a series of ShukerNature exclusives some of the remarkable animals whose discoveries or rediscoveries are celebrating notable anniversaries in 2011. Here's one of them.

Owston's banded civet Chrotogale owstoni is an obscure Asian species, measuring up to 3.5 ft in total length. Named after Alan Owston, whose native collector procured its type specimen on 16 September 1911 at Yen-bay, on Tonkin's Song-koi River in southern China, it was officially described in 1912 by Oldfield Thomas, who designated it as the sole member of a new genus. The visually arresting pattern created by contrasting light and dark, transverse bands on its body and the basal portion of its tail closely resembles that of the banded palm civet Hemigalus derbianus, but the latter species lacks the dark spots visible on the neck, shoulders, flanks, and thighs of Chrotogale. 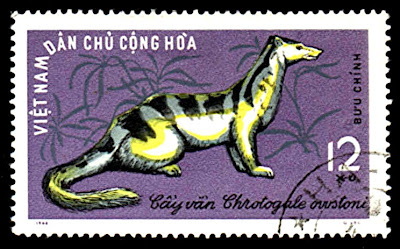 Owston's banded civet depicted upon a Vietnamese postage stamp from 1966

Furthermore, anatomical comparisons uncovered distinct differences in cranial structure and dentition between the two species, differences sufficiently marked to warrant these civets' respective residence in separate genera. Most remarkable of these contrasts were the very slender muzzle of Chrotogale, and its incongruous incisors - these latter teeth are surprisingly broad and close-set, and arranged almost in a semi-circle, a condition more comparable to that of certain insectivorous marsupials than to any species of viverrid. 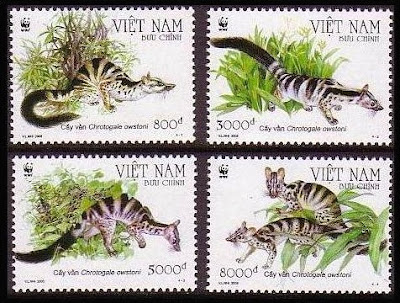 Whether Chrotogale too is predominantly insectivorous, however, remains uncertain, as even today it is still a very mysterious animal, known from less than two dozen preserved specimens originating variously from northern Vietnam, Laos, and from Tonkin and Yunnan in China. A live individual was captured in Vietnam in 1991, followed by others more recently. These latter include (in 1999) three males and seven females at Hanoi Zoo, six males and four females at Ho Chi Minh City (formerly Saigon) Zoo, four of each sex at Pittsboro Zoo in North Carolina, and one female at Frankfurt Zoo. More recently, an international conservation and breeding programme for them was established in co-operation with Vietnam’s Cuc Phuong National Park working with various zoos including Newquay Zoo.

Email ThisBlogThis!Share to TwitterShare to FacebookShare to Pinterest
Labels: cryptozoology, karl shuker, new and rediscovered animals, ShukerNature, The Encyclopaedia of New and Rediscovered Animals, The Lost Ark, The New Zoo